I was under the impression that we were discussing legends, but I guess I was wrong lol I can't argue Canon cuz idk kriff about it. Period. That's just it. Albeit, I do have a quote for Lucas saying that Luke was weaker. Idk if it's Canon or not

lorenzo.r.2nd wrote:I was under the impression that we were discussing legends, but I guess I was wrong lol I can't argue Canon cuz idk kriff about it. Period. That's just it. Albeit, I do have a quote for Lucas saying that Luke was weaker. Idk if it's Canon or not

You mean that "power" one?

lorenzo.r.2nd wrote:I was under the impression that we were discussing legends, but I guess I was wrong lol I can't argue Canon cuz idk kriff about it. Period. That's just it. Albeit, I do have a quote for Lucas saying that Luke was weaker. Idk if it's Canon or not

If we were arguing Legends, you'd definitely have a case. But this is the Canon sub.

As for George quotes, I don't believe they're technically canon themselves. I provided one in my previous post because it came from the commentary off of one of the movies, but even the commentary isn't necessarily canon. It just spoke to George's intent when he wrote the scene, hence my inclusion. As far as I can tell with canon, unless something is explicitly stated or shown in a source, it isn't necessarily canon. This includes author and director statements. Author, director, and story board quotes can be good insight into the intent behind things, though, and sometimes the story board members comment on canon or state something to be canon that wasn't shown on screen, but could be inferred (see Rebels Recon as an example).

oh, i dont think mine is from the movies specifically, so it's likely legends. its an interview with lucas. its not intent or anything. he gets asked some kriff, and somehow (lol) he turns one of the answers into explaining how kids see power, and how they think luke is powerful cuz he is the good guy, but how everybody knows vader is stronger, or something along those lines lmao

PS BOD i am proud of u saying EU vader> luke. u made me shed a tear there. seems like im not alone after all.

I've had Legends EU Vader > ROTJ Luke for a long time now ever since the Lucas Vader vs EU Vader distinction argument was made. At this point, they're basically different characters.

wait, what argument? i never heard of this lol 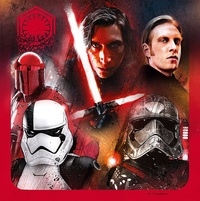 I feel like Kanan and the Grand Inquisitor are too low. GI should be tier 6 and Kanan could arguably be tier 7.

Americanspeeddemon wrote:I feel like Kanan and the Grand Inquisitor are too low. GI should be tier 6 and Kanan could arguably be tier 7.

Really depends on who you ask. I personally have S4 Kanan as a solid 6, with flashes of brilliance that bump him all the way to an 8 (his showing against Maul, his holding back of an exploding fuel depot). I have the Grand Inquisitor solidly as a 6.

Gonna give this a try. Not placing The Ones, Bendu, the witches of Dathomir et al, just standard Force Users. Also not in order within the tiers.

Keep in mind I believe there's no such thing as real gaps between tiers, power progression should be a continuum. I may also radically change this after Episode IX releases.

Tier One: Average Jedi Youngling
Comments: Okay, so let's start from the base. Not much to explain here.

Tier Three: Average Jedi Knight, average Inquisitor, Ezra Bridger
Comments: Ezra contending with Inquisitors in S2 then improving greatly during S3 and S4, his TK and TP feats and his spiritual growth should IMO grant him a place here.

Tier Four: Average Jedi Master, Cal Kestis, Grand Inquisitor, Barriss Offee
-Comments: So Cal defeated two Inquisitors and GI should also be a bit superior to most of them. The latter also overpowered Jocasta Nu and outranked Tenth Brother, who was a Jedi Master as well. Barriss is an exceptional Knight, her fight with Anakin being impressive enough.

Tier Six: Qui-Gon Jinn, Asajj Ventress, Savage Opress, Eeth Koth, Kit Fisto, Pong Krell, Kylo Ren, Rey
-Comments: Now we're getting controversial, but Kylo has displayed some amazing feats (killing a Zillo Beast, freezing and knocking people unconscious with the Force, etc.) and he's got hype as one of the greatest warriors ever. I really don't see him losing to Kanan or being stomped by, say, Maul. Rey is arguably a bit less skilled than Kylo but I'll keep them in the same tier for now.

Tier Seven: Anakin Skywalker, Obi-Wan Kenobi, Darth Tyranus, Darth Maul, Ahsoka Tano, Quinlan Vos
-Comments: I'd argue RotS Anakin was transitioning from this tier into the next, but was still matched in TK by Obi-Wan (I don't buy the hindered argument, personally). I also think he's not far superior to Dooku, but had a stylistic advantage against him. Ahsoka's placement is debatable, hopefully we get more insight in TCW S7. The others are pretty straightforward IMO.

Tier Eight: Darth Vader, Mace Windu
-Comments: Mace's performance against Sidious should put him ahead of anyone in the previous tier, but I think he hasn't reached Yoda's mastery in the Force. Vader's feats and accolades put him solidly above Tier Seven IMO.

Tier Nine: Darth Sidious, Yoda, Snoke
-Comments: Snoke's holistic protrayal, accolades and feats (creating the Force Bond between Kylo and Rey, ragdolling Hux across the Galaxy, etc) put him in this level of power. His weak physique is a distinct disadvantage however, but I'll keep him as a Nine.

Tier Ten: Luke Skywalker
-Comments: Highly speculative stuff, I know. But given his potential, the amount of knowledge he gathered, the IU rumours about him bringing down Star Destroyers with the Force, Snoke's stated fear of him and the projection feat in TLJ, I think it's highly plausible that Luke is the absolute best of the bunch. We'll have to wait for evidence though.

@dark_globe How do you feel that everything I argued in this thread was proven right in the movie darling? Bet it stings real bad. Guess you have no choice but to put Kylo>Rey now, your hate boner aside.

Thank you for informing us of that EC. Good contribution, once again!

7th time you’ve pointlessly commented. I realize how the twins get their post count up now.

And you don't bump up your post count by spamming pointless no brainer comments? Jesus the hypocrisy is unreal, and no, I'm not trying to get my post count up, I'm just curious to see what your reaction will be to my comments.

What no brained comments do I ‘spam’? Also why do you care about my reactions so much?

He cares because your excuses and lack of intelligence is hilarious. Wait, nvm, you are intelligent, as your ability to see through my "excuses" on Discord shows. Not like everyone else has the measure of it and you don't or anything, you are totally way smarter.

Judging by my IQ scores compared to yours (and by default your brothers) I would say the contrary, by a mile.

>Took an IQ test on the internet and got a better score, which you never even provided proof of.
>Somehow makes you better than me.

1. Check discord
2. You brought my intelligence into question, your fault.

EmperorCaedus wrote:What no brained comments do I ‘spam’? Also why do you care about my reactions so much?

Today in the suspect showdown thread:


Nope. It’s the opposite lel

Self evident, no brainer comment from someone trying a bit too hard to be captain obvious.