Valkorion has been voted in as the #3 most powerful Star Wars character.

If you have not already, please open the spoiler boxes to read the rules, guidelines, and banned characters for the tournament.

Spoiler:
This tournament will rank characters based on their overall combative threat level, NOT their raw Force potency. The specific metric will be the ease by which a character can defeat Darth Malgus. All characters will be operating at their peak actualized iterations barring circumstantial or momentary amps. While everyone will fight in-character—meaning Yoda will not be bloodlusted—they will be aiming to kill Malgus as quickly and efficiently as possible with nothing held back.

Spoiler:
A thread titled "Top Fifteen Tournament #1" will be created. Members can comment who they believe could defeat Darth Malgus the easiest, e.g. Luke Skywalker or Palpatine. Members are welcome to debate other members to change votes. After ten days, the votes will be tallied. Members will then choose between the two most voted upon characters. The winner will be ranked as #1 on our list, and "Top Fifteen Tournament #2" will be created now excluding the #1 pick.

Spoiler:
The following is a list of characters that will not be included in the tournament. This list may be added to.

Waiting to see arguments for Valkorion and Nyax since I’m not sure between those two.

Az's points in round 2 convinced me that Nyax might not be as good as I initially thought. Going Valk.

Valkorion for the win.

Krayt has zero parity with Luke and struggles with scrubs like Cade and Wyyrlok. Therefore he beats Valk. Seems legit.

Blade_of_Dorin wrote:Waiting to see arguments for Valkorion and Nyax since I’m not sure between those two.

Nyax is inferior to Malgus. He doesn't belong on this list.

DC77 (Reborn) wrote:Krayt has zero parity with Luke and struggles with scrubs like Cade and Wyyrlok. Therefore he beats Valk. Seems legit.

Go ahead, keep practicing that line. Someday it might convince somebody.

I'll be writing a lot more than a one liner if a pro Krayt movement starts. Until then the majority seem convinced without my interference, hence why the intent wasn't to "convince" anybody.

A few moments later a turbolaser barrage streaked toward the frigate. A deep pang of sorrow washed over Leia as she awaited the coming explosion. Whatever Raynar had become among the Killiks, he had once been a Jedi and a close friend of her children, and she knew that his loss would leave her feeling empty and dismal.

Then, as the strike neared Raynar's vessel, the dark weight inside vanished, and Leia's strength surged back. Still gasping, she was about to report who was aboard, but the turbolaser barrage suddenly veered away and blossomed in empty space.

Grendyl cried out in astonishment, a murmur of disbelief rose from the survivors on the command deck, and Leia finally understood why the Killik gunners were such bad shots.

They weren't trying to hit the Ackbar.

When the second volley of turbolaser fire also veered away at the last instant, Bwua'tu narrowed his eyes and turned to Leia.

Leia shook her head. "It's Raynar Thul," she said. "And I think he's coming to take your ship."

According to the ICSII, turbolasers propagate at lightspeed (with sublight tracers); in either case, the bending of turbolasers is something that we've only ever seen done by singularities (e.g. Centerpoint station makes turbolasers curve "impossibly"). No shields, tractor beams, engines, etc have managed to do this, so you could make the argument that this feat is more difficult than, say, lifting a super star destroyer.

The pain of losing an arm might have forced a common Jedi to stop fighting, but Raynar was no common Jedi. He had the Force potential of the Colony to draw on, and he did that now, swinging his remaining hand up to hurl Luke down the corridor as he had done before.


The Chiss would grow even bolder and attack deeper into Colony territory. Trillions of Killiks and millions of Chiss would die, and the war would continue more ferociously than before.

For reference, single Nest is more powerful than Luke in his "I'm afraid to use the dark side" state:


She could still draw on her nest to enhance her Force potential, and as strong as Luke was, he was not strong enough to overpower an entire nest of Killiks.

I'm too lazy right now to post the quotes, but yeah.

When he fights RotS Sidious, that is Sidious after growing stronger following his defeat of Mace Windu:

We know from many sources that the dark side is growing stronger throughout the PT, and this is evidence that it can play some role in Sidious's combative ability. Given that Sidious still has a long ways to grow through to Dark Empire and it's been 13 years since TPM, he would have logically grown substantially since then even if the dark side weren't getting stronger. On top of that, Darth Plagueis is stated to be the most powerful sith who ever lived (to that time), and then TPM Sidious gets the same title, and receives a massive power boost on his master's death. So RotS Sidious has a long growth rate beyond Plagueis, who scales above Vitiate (or, at the latest, TPM Sidious does) and who alongside Sidious unbalances the entire cosmic Force through sheer force of will (something Sidious later does by himself). Meanwhile, there isn't that much evidence that Valkorion is significantly more powerful than Vitiate; a lot of Ziost could've easily gone into reviving and restoring him rather than amping him (if it were that easy, why doesn't he just keep amping himself over the year with Ziost-like consumptions?).

I’ll make a case for Vol as soon as I have some time.
@TheEllimist great post btw

MasterCilghal wrote:I’ll make a case for Vol as soon as I have some time.

Currently my money's on Yoda but I will be waiting for your case on Vol. 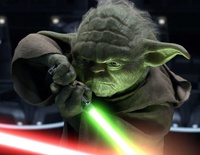