J
Case for Vol
First of all, the grand Lord Darish Vol is directly compared to Luke Skywalker by a famous statement:

Ascension wrote:Abeloth sat huddled in Ship's interior. She had not revealed to Khai or anyone just how badly wounded she had been by the attack on Kesh. Vol had much of the power of Skywalker, combined with experience, and it had been a devastating encounter.

Now, based on a dictionary “much of” means  “plenty of, ample, copious, abundant, plentiful, considerable, substantial”, as such it indicates that Vol has a great deal of Skywalker’s power and is definitely not far from him, based on a description by Abeloth, who had just experienced and got an idea of Vol’s overall power. But could Abeloth be wrong in her assessment? It’s extremely unlikely for 2 reasons:
1- Abeloth had a high opinion of Luke’s power and considered him “the brightest point in the force she could sense” (from the Essential reader’s companion).

2- Abeloth had also already fought a Luke willing to go all out 3 times . For example, Let’s take a look at a particular moment during the fight between her and Luke in the novel Vortex:

Vortex wrote:Luke opened himself more fully to the Force, using his love for Ben and his lost wife and the entire Jedi Order to draw it into him. The foul miasma of dark side energy, still swirling into Abeloth, seeped into him, filling him with greasy nausea. But the light side rushed in, flowing in from all sides, pouring through him like fire. A golden glow began to rise from his skin— cells literally bursting with the power of the Force—and Luke felt them both start upward again. Abeloth countered, hissing in anger, and they hovered a hand span above the floor.

A tremendous crack echoed down from the vaulted ceiling. They dropped again, hitting so hard that Luke’s breath left in a groan. Abeloth slammed down atop him, her single leg still wrapped around his, the stump of her arm driving harder into his throat. Something crunched in his larynx. His breath came in shallow, wheezy gasps, and the crushing hand of panic began to clench at his heart.

So the novel describes Luke opening himself fully to the force, using his love for his family and the Jedi in general to the  point where his cells were “bursting with the power of the force” , which indicates Luke was actively drawing on his full power to combat her, or at least very close to it. This is clearly obvious by the fact that Luke has admitted on at least 2 occasions Abeloth had greater power than he did:


"Abeloth." Luke repressed a sigh. "She's here. Somewhere. Experimenting. Using the Force with greater strength than I ever did, certainly."
-convinction

It was no good. Abeloth had a dozen times the Force strength Luke had, and he could do no more than keep her from crushing his throat.
-Vortex

Seeing this, clear Abeloth knows how powerful Luke is and I see no reason for why the statement about Vol’s force power being not very far from Luke and he is definitely outside the one-shot range.
For anyone still skeptical, let’s take into account his fight with Abeloth. One of the main misconceptions about it is that the fight was purely mental and that Vol’s ability to contend had to do entirely with his use of Mnemotheraphy, a special force technique. However, this is not correct. In various moments thorought  the duel he is described as defending himself from blasts of pure force energy from the being:

Ascension wrote:He felt her astonishment, and then fury, and knew he was discovered. The tendrils were no longer coyly teasing and caressing. They were violent and brutal now, wrapping about his throat, invading his body. He resisted and went on the attack.
[...]
A blast of Force anger buffeted him, but he rooted himself against it and continued.
[...]
Her pain exploded and hurled him back, releasing him, but causing the most exquisite agony Vol had ever experienced to race through every part of his being.

Abeloth attacks him at least three times (one of these it’s specifically noted it was a blast of anger) yet he’s able to defend himself and survives he last attack, a notable feat when you consider that she later released force power sufficient to destroy the entire city of Tahv. Also, Abeloth had no reason to hold back from him as she had to eliminate him as soon as possible in order to take control of the Lost Tribe.
Now, if Vol is able to withstand blasts from an angered version a being that’s stronger in the force than Luke, there’s no way Skywalker s going to be capable of overwhelm him casually (Caedus style).

Superiority to UnuThul and Yoda
As I’ve already established, Luke as of FOTJ cannot effortlessly beat Vol. now let’s look at what Luke as of DN did to Unuthul when he decided to unleash his full might:

Dark nest 3 wrote:The Master sighed and shook his head. "What am I going to do with you, Raynar Thul?" he asked. "You learn nothing from your mistakes."

Luke deactivated his lightsaber and picked Raynar up by the collar and slammed him against the wall. He used the Force to pin him there, waiting for an answer to his question, watching as the expression in his captive's pained eyes turned from astonishment to anger to calculation.

In the case of Yoda, when one takes into account Luke’s growth up until FOTJ (which you can find in this great blog by @“The Ellimist” ), the idea of the GM being able to defend himself from Luke is pretty much preposterous.

The Ellimist wrote:Great post! I do have some disagreements, but I think I'll give them later.

Thank you. Take into account English isn’t my native language, so sorry for the grammar mistakes and repetitions.

Assuming Ant or Skillz don't decide to make a case for Valk I might draft a response to some of these arguments.

All aboard the Jaina Solo >> Valkorion train...

Even though, @Masterilghal post is awesome I still think that Valkorion is above. (I could have follow Vol only if we choose him as the number 2)

xolthol wrote:Even though, @Masterilghal post is awesome I still think that Valkorion is above. (I could have follow Vol only if we choose him as the number 2) 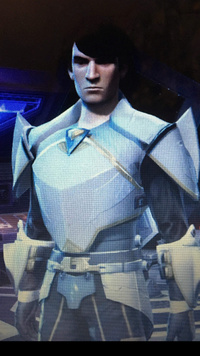 Reasons for Plagueis being above Yoda?

Reasons for Plagueis being above Yoda?

Midi-chlorian manipulation. All he needs is one gap in Yoda's defenses and it's over. And conventionally he's almost as powerful and masterful as Yoda, so he can definitely wage a duel as intense as the one between Yoda and Sheev for a prolonged period of time.

Is he? He's EoTPM boost + 13 years of general growth and the dark side growing stronger + the dark side ascending after Mace duel behind RotS Sidious.

Anyway, I think the main candidates here are:

UnuThul - combined Force potential of trillions of beings, bending turbolasers.
Lord Nyax - stomping mid-NJO Luke (but IDK how legit it is)
Lord Vol - defeating Abeloth in a TP battle, having "much the power of Luke" according to Abeloth who had seen Luke at full power
Plagueis - midichlorian manipulation (especially vs. Sidious at the end), unbalancing feat, causing the Force to create the Chosen One, "most powerful sith who ever lived" before Sidious
Yoda - scaling from RotS Sidious, likely even stronger in his prme
Krayt - if you buy Apocalypse scaling
Valkorion - Ziost, beating Vaylin/Arcann/Outlander, general hype

I think a lot of the people voting for Valkorion though should look more at the feats of UnuThul and Lord Vol in particular though.

Why the following have cases over Valkorion:

No source says it was billions to my knowledge. Even the capital of the Sith Empire, Dromund Kaas, only had millions of citizens.

Hmmm, I might make a case for Valkorion here.