Due to their relevance to several Jedi respect threads, I figured it would be worth making a mini-RT for the Yinchorri warriors. Respect the Yinchorri!

The Yinchorri are completely immune to mind tricks and mental probes by even the most talented of Force users, in a similar way to the Force connections of the ysalamir and vornskrs of Myrkr.

Darth Plagueis (2012, James Luceno) wrote:That resolve, Plagueis had learned after more than two years of experimentation on the Yinchorri, was in fact a kind of Force bubble fashioned by the turtle-like alien's limited number of unusually willful midi-chlorians. This suggested that the Yinchorri was actually strong in the Force, despite his pitifully low count. The discovery had come as a breakthrough, and Plagueis was still grappling with the implications.

The Force bubble itself was similar to those generated by creatures that drew on the Force to avoid predation by natural enemies. The relationship between the arboreal ysalamir and its adversary, the vornskr, provided a curious example, in that the latter was attracted to the former by the very mechanism the ysalamir employed as a defense. Where an extremely low midi-chlorian count might have bolstered the odds of survival, nature had instead made the ysalimir species strong in the Force. So strong, in fact, that several of the creatures acting in concert could create a Force bubble encompassing kilometers rather than meters. In a sense, the Jedi Order had done the same on a galactic scale, Plagueis believed, by bathing the galaxy in the energy of the light side of the Force; or more accurately by fashioning a Force bubble that had prevented infiltration by the dark side, until Tenebrous's Master had succeeded in bursting the bubble, or at least shrinking it. How the Order's actions could be thought of as balancing the Force had baffled generations of Sith, who harbored no delusions regarding the Force's ability to self-regulate.

Plagueis hadn't lost interest in Venamis by any means, but the Yinchorri's immunity to Force suggestion-an immunity the species shared with Hutts, Toydarians, and others-had provided him with a new line of investigation. Unlike ysalamiri, which created a Force bubble in the presence of danger, the Yinchorri were in a perpetual state of involuntary immunity to Force suggestion. The fact that immunity was in a sense hardwired into them meant that the ability was an adaptation, prompted by a past threat to the survival of the species. To Plagueis, it meant that the Yinchorri's midi-chlorians had evolved to provide protection to a species that was naturally strong in the Force. If that were indeed the case, then the Yinchorri were living proof that the Sith of the Bane line had been on the right path from the very start.

This is evidenced by their complete immunity to the attempted mind tricks of both Hego Damask/Darth Plagueis and Qui-Gon Jinn.

Darth Plagueis (2012, James Luceno) wrote:Holding Qayhuk's baleful gaze and motioning with his hand, Damask said, "You have no interest in seeing Yinchorr seated in the Senate."

Qayhuk took umbrage. "Why else would we have journeyed all this way?"

"You have no interest in seeing Yinchorr seated in the Senate," Plagueis repeated.

Qayhuk glanced at his green-skinned brethren, then looked at Hill. "Is Magister Damask deaf or in ill health?"

Hill turned to Damask in concern but said nothing.

Damask concealed his astonishment. As rumored, the Yinchorri were apparently resistant to Force suggestion! But how was it possible that midi-chlorians in a being of relatively low intelligence could erect an impenetrable wall against the influence of a Sith? Was this some sort of survival mechanism-the midi-chlorians' way of protecting the consciousness of their vessels by refusing to be manipulated? He would need to possess one of these beings to learn the secret. 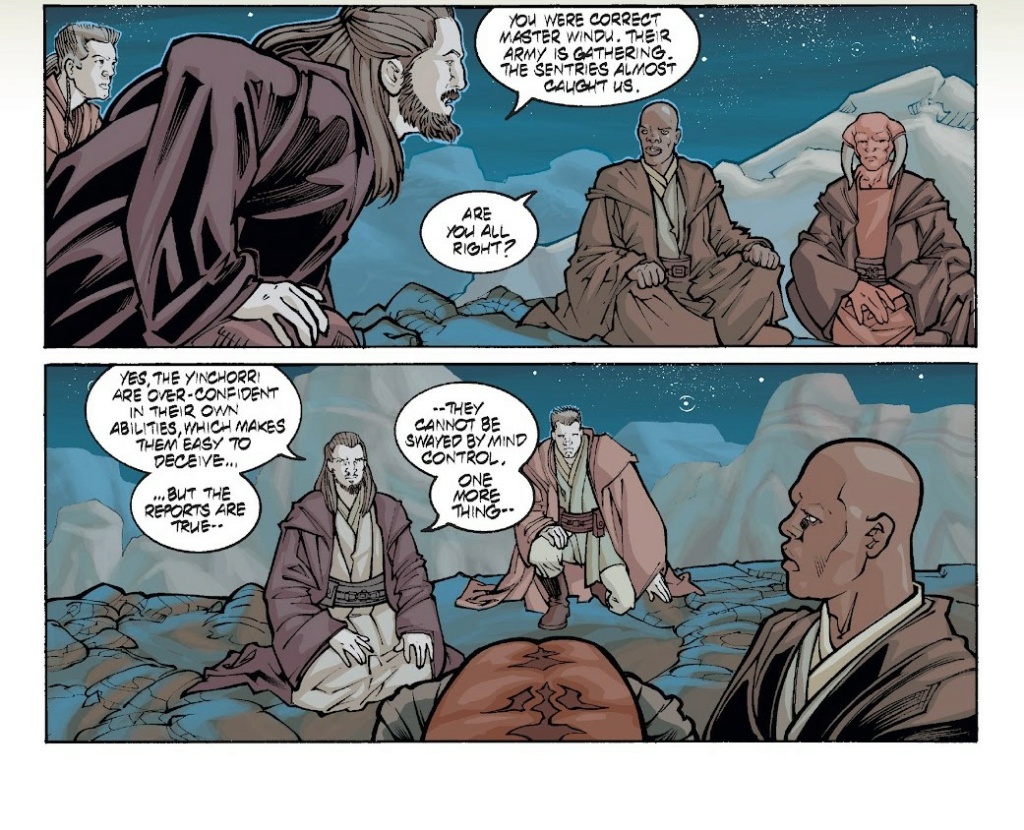 Such is the potency of their immunity that Palpatine notes that it poses a significant threat to his plans for the future, and places the prospect of the species being brought down on a similar level to the deaths of Jedi. 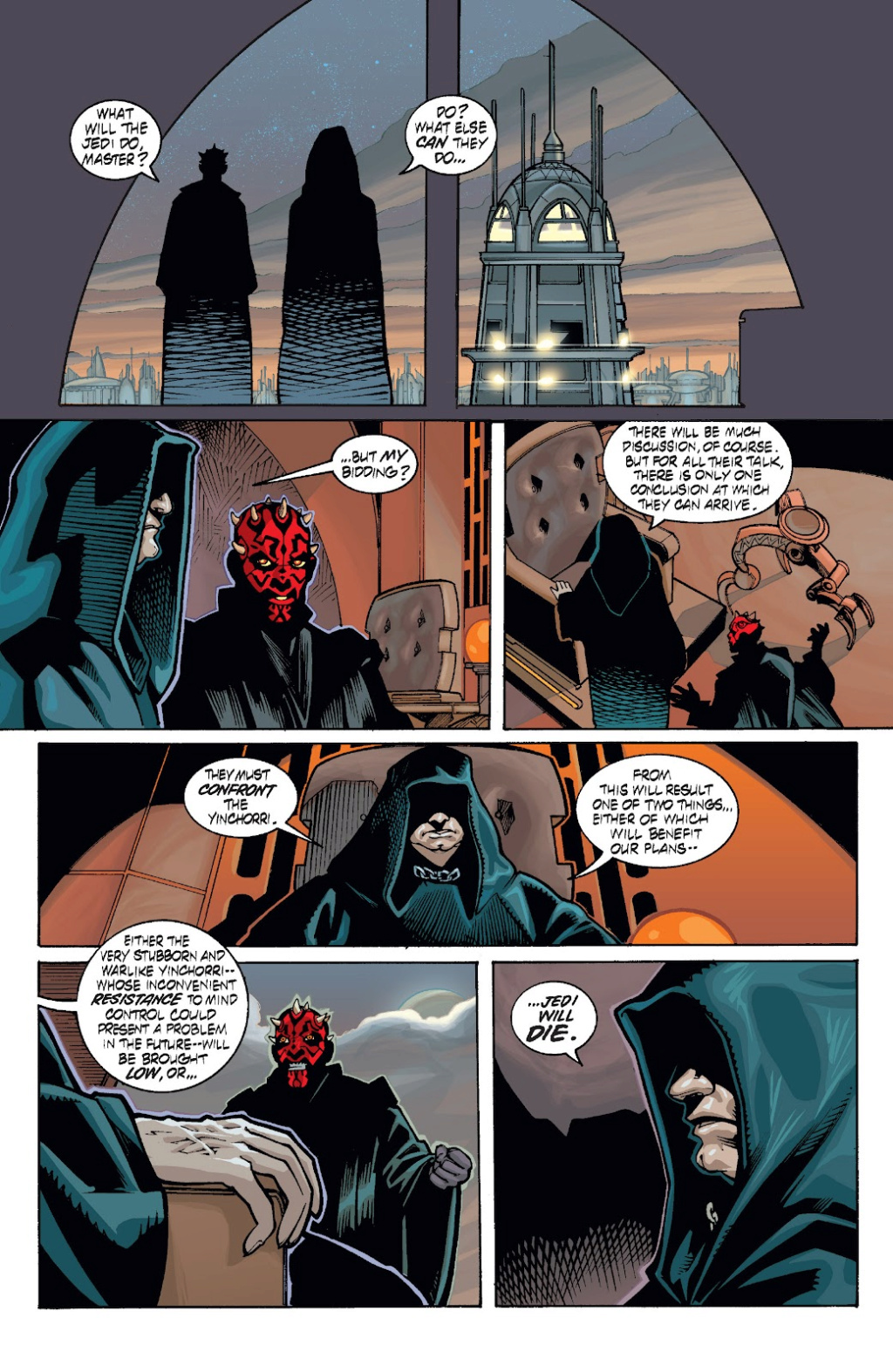 The Yinchorri warriors are each in possession of Cortosis shields, which deactivate lightsabers on contact. 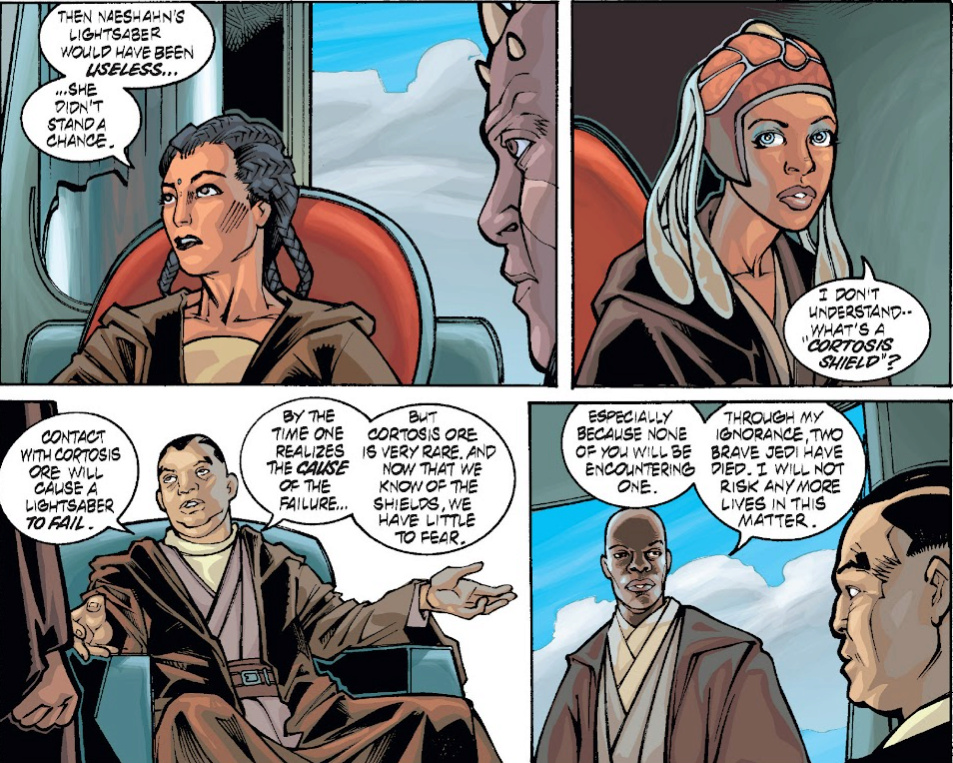 Their armor was cortosis-weave and lightsaber resistant as well.

Defeating the Yinchorri was one of Mace Windu's most difficult challenges.

Fact File #59 wrote:One of Mace's most difficult challenges was to defeat the aggressive Yinchorri species, who were immune to Jedi manipulation.

(credit to Ghost of Grievous) 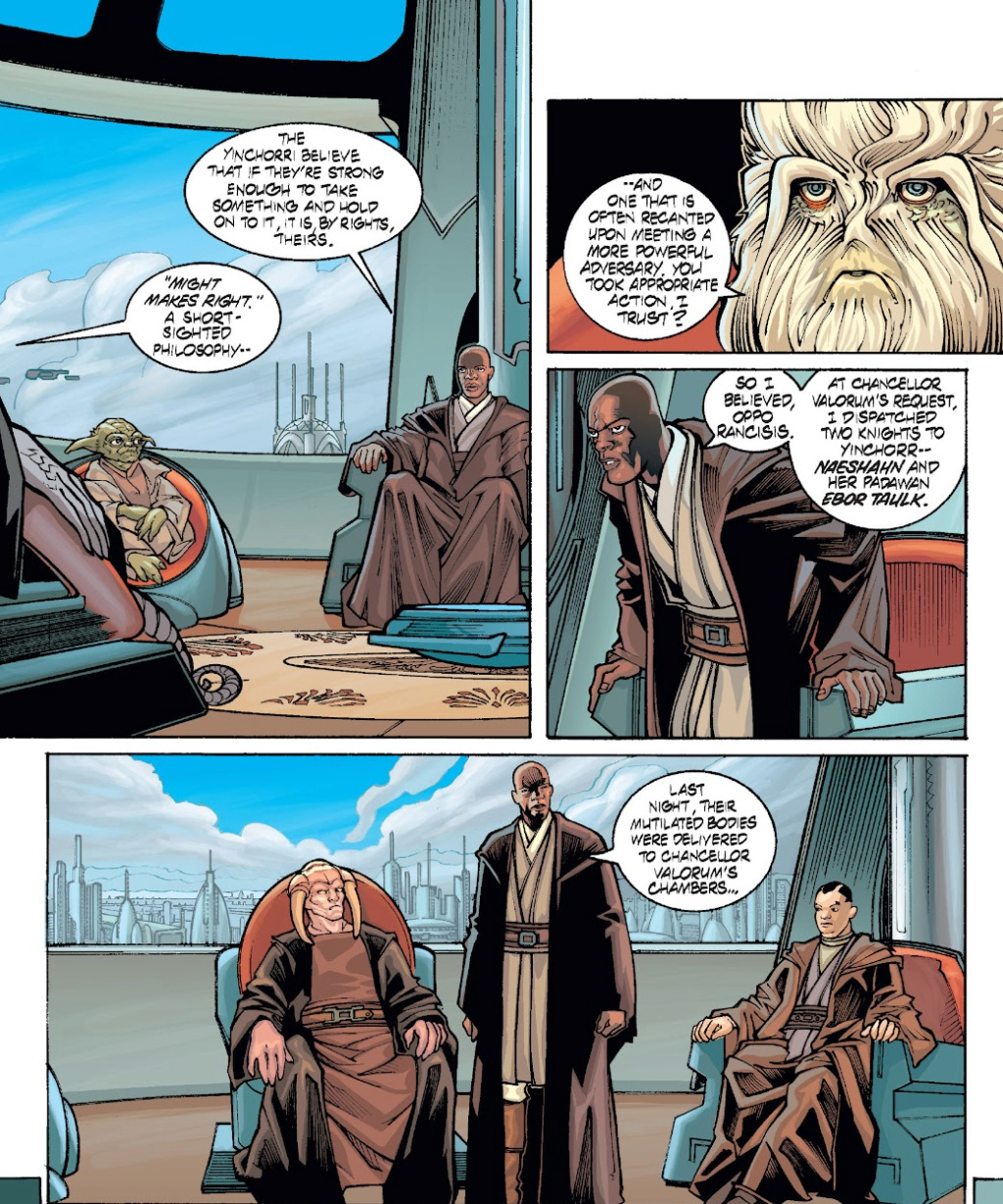 A Yinchorri kills a Jedi standing sentry, Jude Rozess, in single combat, physically dominating her after taking her lightsaber out of commission. Note that the Jedi were at this point aware of the threat the Yinchorri posed and their cortosis shields. The Yinchorri only dies along with his kill because he stops to gloat. 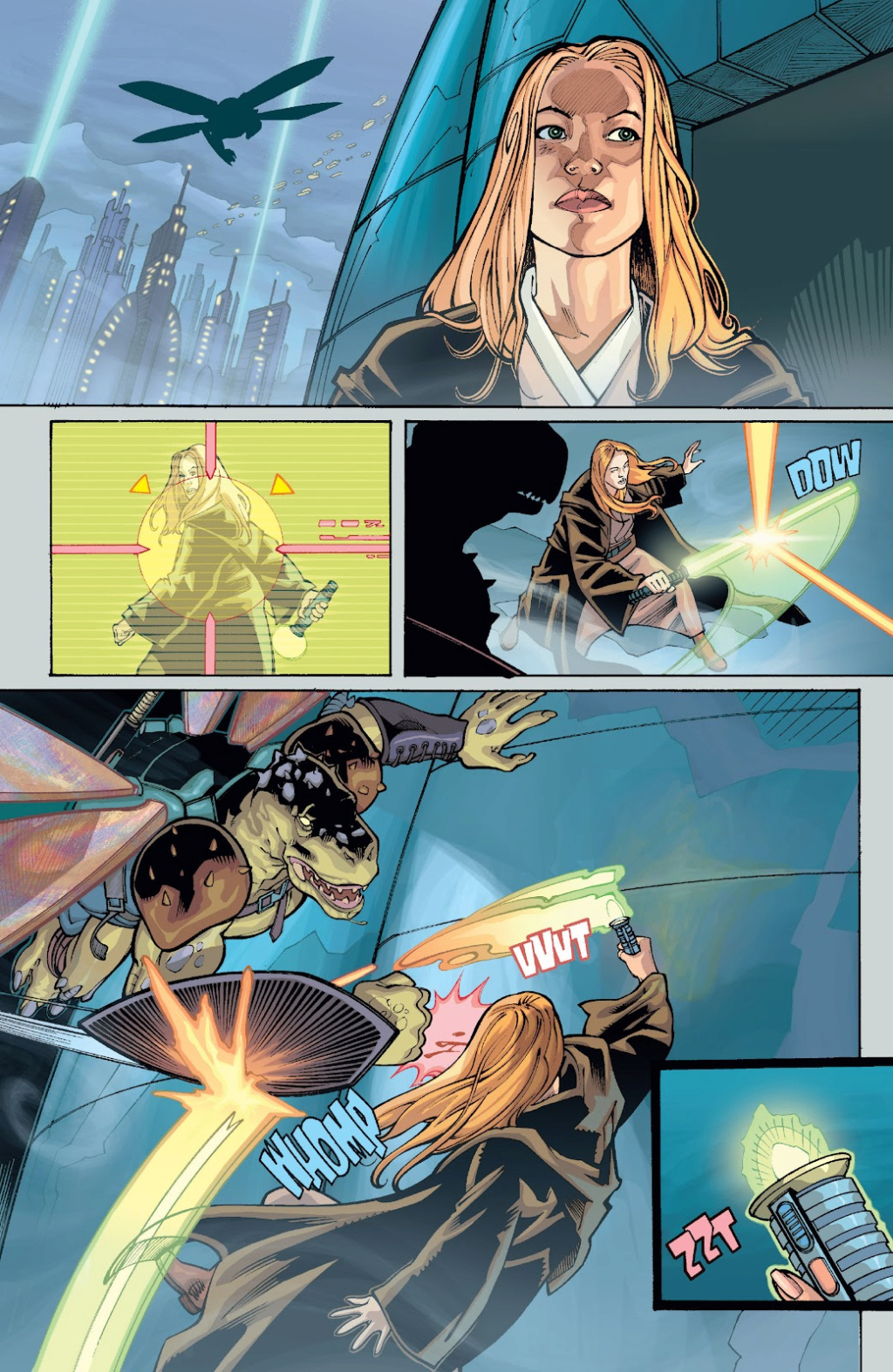 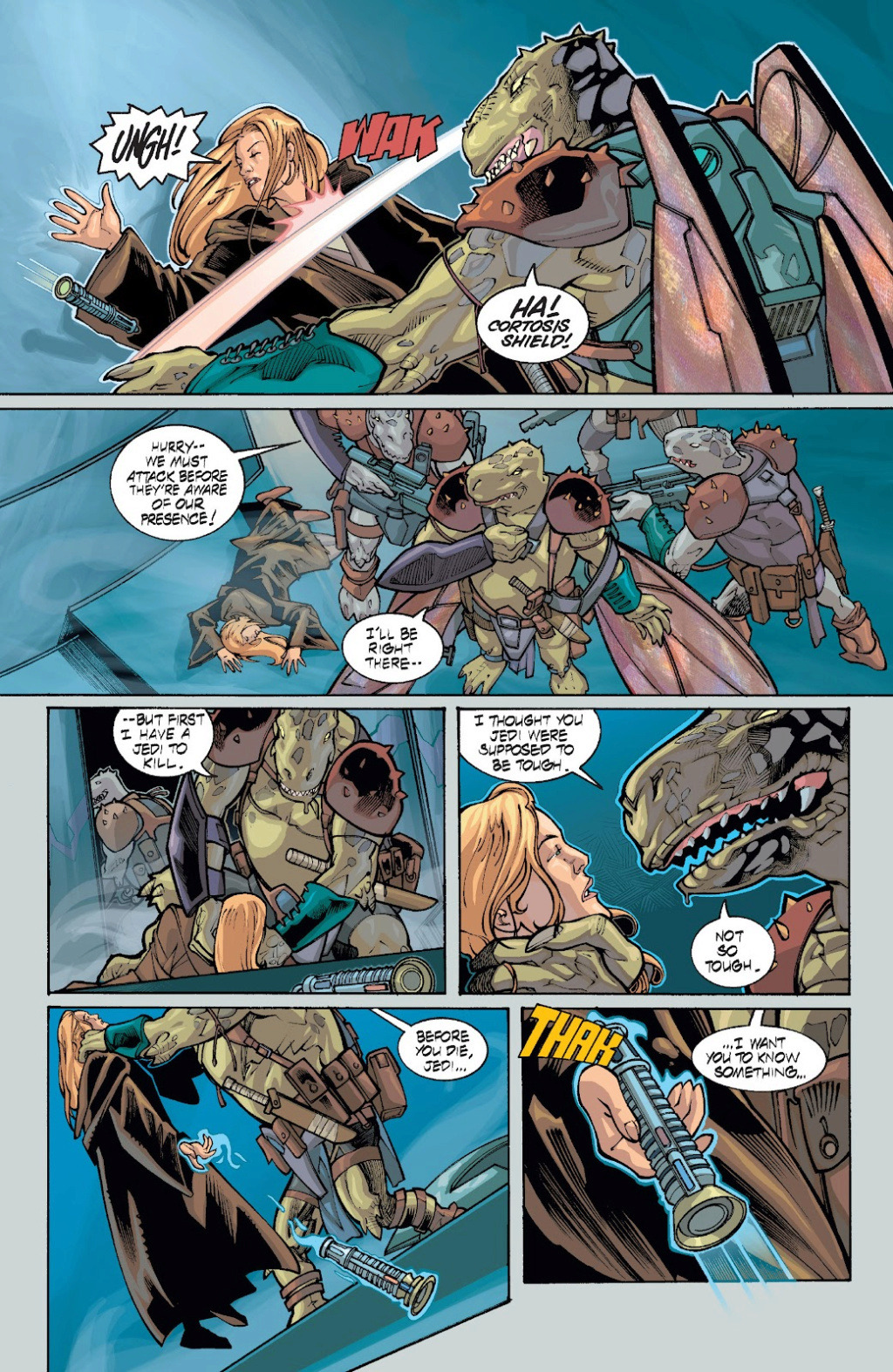 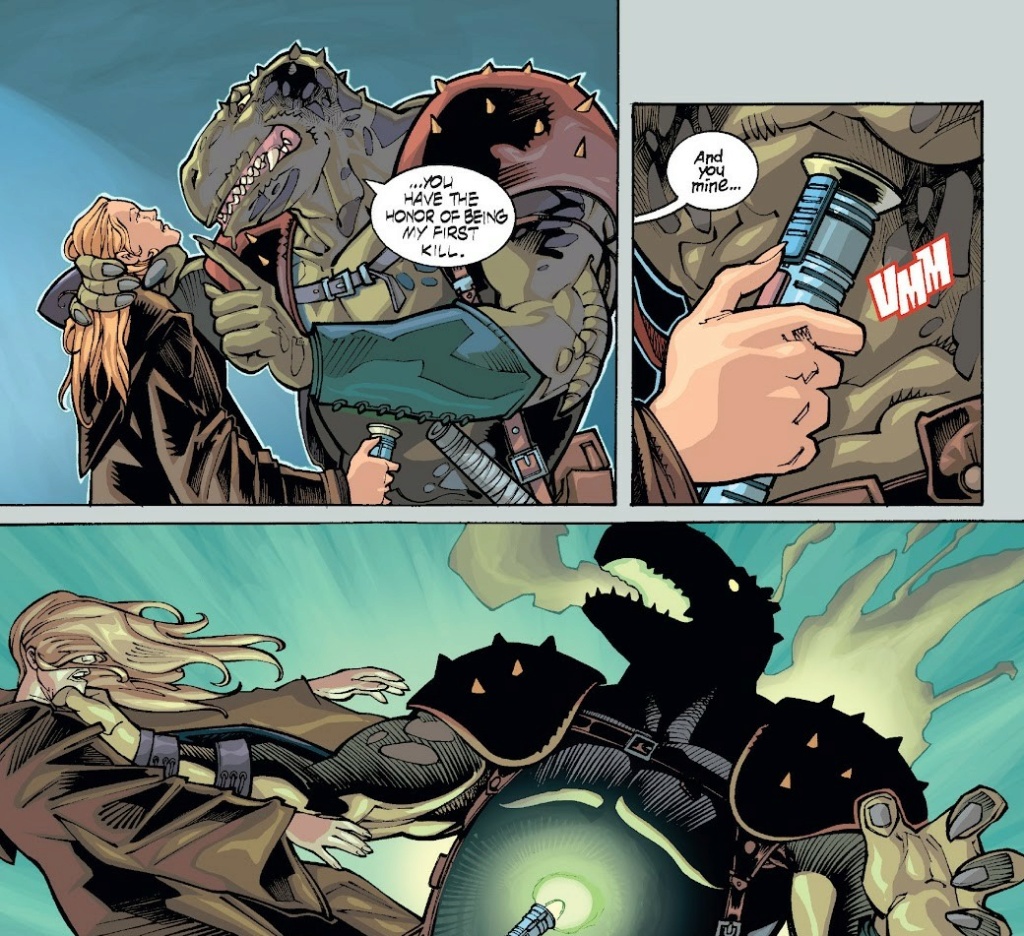 The Yinchorri strike against the temple, although anticipated and met by a large and skilled array of Jedi Masters, including Councilors Yoda, Yaddle, Oppo Rancisis, Yarael Poof, Depa Billaba, and Even Piell, as well as other notable Jedi such as Soon Bayts, still manages to kill one other Jedi (Theren Nie-Tan) and injure several more in the ensuing battle. 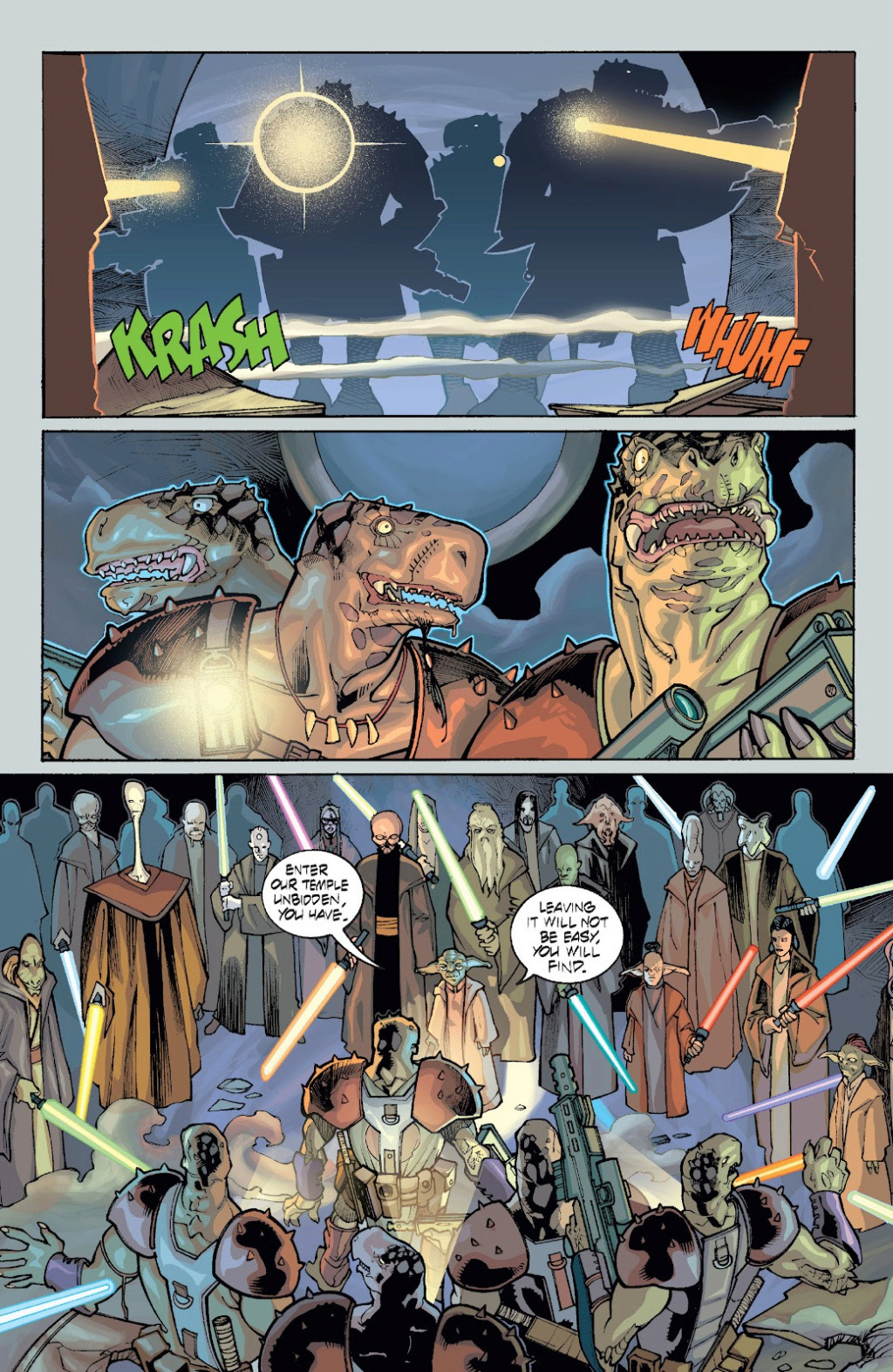 A Yinchorri is able to physically restrain post-ESB Leia Organa before she can react. Special note is made of the surprising swiftness of the movement. 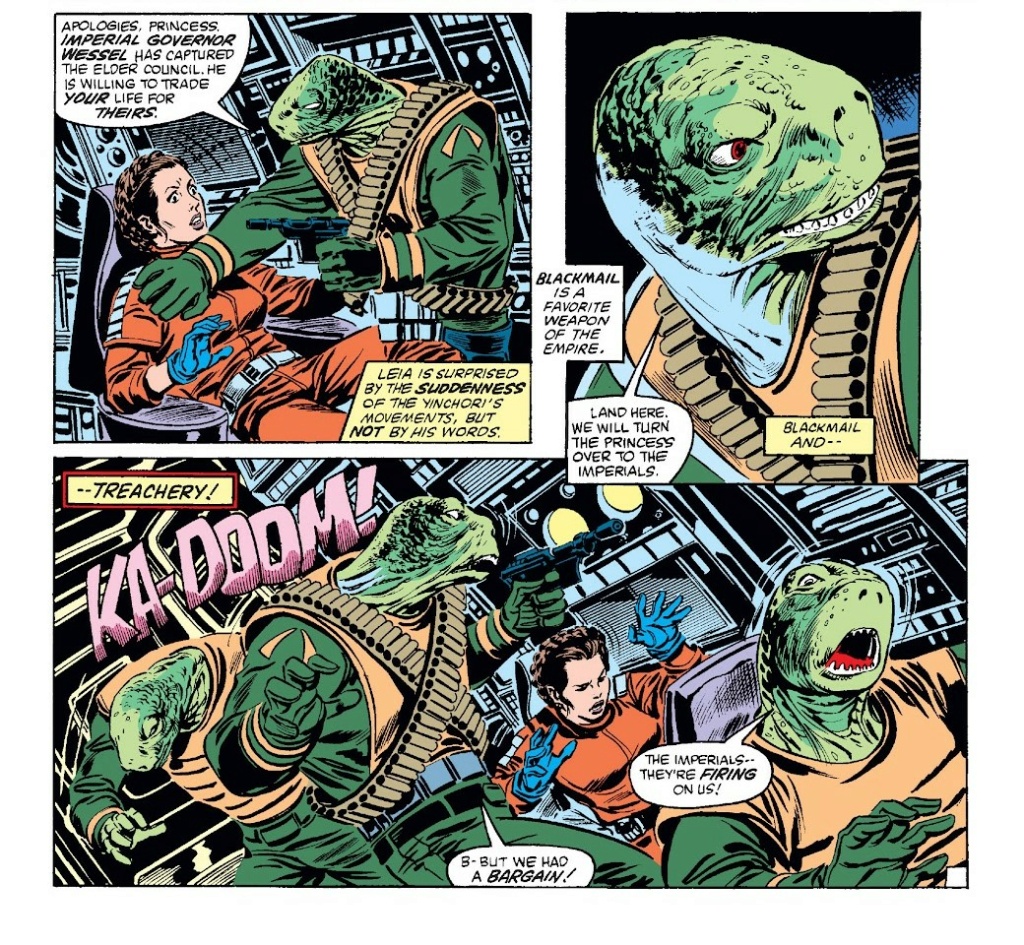 The Yinchorri are extremely fast, and capable of trading losses in combat against fully trained Jedi with their cortosis shield. Their mental shields are effectively impenetrable in combat, leaving them immune to being sensed by other Jedi. Respect the Yinchorri, and respect those who best them even more!