i can tell its an ant post by the amount of blue in it.

Message reputation : 100% (2 votes)
Due to the utterly disgraceful attitude of Revan's supporters I'm withdrawing my support for him and voting Geth instead.

ScionOfSkywalker77 wrote:Due to the utterly disgraceful attitude of Revan's supporters I'm withdrawing my support for him and voting Geth instead.

ScionOfSkywalker77 wrote:Due to the utterly disgraceful attitude of Revan's supporters I'm withdrawing my support for him and voting Geth instead.

That's not how people are supposed to vote here. If we all behave like that, then these thread are all useless, since we will be just voting for the guys we like the most

The “She’s a powerhouse that could go toe-to-toe with Darth Sidious, but she comes at it from a unique angle. Nightsister magic is not like the Force, and that lets us do some surprising things. Let’s just say Count Dooku does not have an easy go of it here!” line is an author quote discussing Son of Dathomir and teasing that she will do this from a unique Nightsister angle that involves harming Dooku (hint: she drains Dooku’s life force to become far stronger).

The quote specifically says She is capable of going toe to toe with Sidious. Does not refer to future events. "unique angle" quote is only there to show the difference between their techniques.

And what is the source for this?

I was asking about your claim of why her powers would be weaker than an Average Jedi Knight? Not sources regarding Dathomir.


You do realize that this did not occur and she was only hoping? She was forced to leave the vessel due to Sidious' interference/lightning and couldn't finish the process. It only allowed her to gain her physical form back, nothing suggests that she became far stronger than her base level.


How were you figuring Dooku did not make her far more powerful when even Grievous is forcing Talzin to retreat, anyway?

2 - I don't know, maybe it is because she was busy dealing with the ritual and occupied torturing Dooku, and the moment droids began firing on her she immediately disappeared? Nothing related to Grievous anyways.

When Palpatine senses and is shocked by the depth of Gethzerion’s power, he is sensing her power rooted in a planet that tremendously amplifies it.

and what is your source for this claim? Seems nothing but speculation to me.

I agree that, upon a relook, she is shown possessing a lightsaber in a lone trading card set at least a decade before CoPC. I question if she still has one given she nor any of the other Nighsisters are even mentioned to possess one in CoPC but, assuming she does, my point still stands. Gethzerion is not trained in Jedi and Sith fighting techniques. The fact she has "quick reflexives" and can press the trigger of a blaster pistol doesn’t mean she can fend off an amped Malgus one-on-one.

You do not require the combat training of the Jedi/Sith to compete with them? There are uncountable instances of Jedi/Sith being bested by non-Force Sensitive people with different combat techniques. Nightsister training is one of the most brutal and formidable among the galaxy.

Yeah, no. She has been trained as a Nightsister and still uses Nightsister Magic and teachings.

… and then the Nightsisters officially exiled her from their clan, and that this exile is recognized as legitimate by several out-of-universe sources. The fact she is "formerly of the Nightsister clan" means she is officially not a Nightsister, and thus cannot be thrown into Nightsister-only accolades.

Sounds like an excuse to me. Charal kept embracing Nightsister teachings, continued using their techniques and spells. The quote is universal anyways, it includes all other Nightsisters. Despite other Nightsisters do not view her as one of them anymore, she is still a Nightsister by blood and most importantly, she didn't abandon their ways. Other sources also lists Charal as a Nightsister so I don't think this case works, really.

Message reputation : 100% (3 votes)
HU has made a lot of great points, but I can't in good faith vote for Geth due to pure unadulterated spite I feel towards DC switching his vote due to spite.

I vote for Revan out of my spite towards DC's spite. 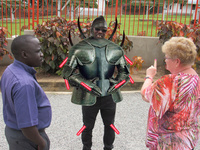 Message reputation : 100% (3 votes)
After long consideration I have realized I don’t like being on the same side as Vader brigade, Revan gets my vote.

Message reputation : 100% (3 votes)
After long consideration I have realized I don’t like being on the same side as Vader brigade, Revan gets my vote.

My vote goes to Revan.

After some reflexions and search I still have some problem with what you give us for Gethzerion.

First of all you are trying to compare Charal animating some dead bodies and Nightsisters Zombies. This are two absolutely different spells and thus not recquired the same knowledge and power. Indeed, Nightsisters Zombies are based on dead nightsisters, not random corpse.

StarWars.com wrote:The world Dathomir holds many dark secrets -- such as ancient incantations that could raise the dead. When the planet was attacked by the Separatists during the Clone Wars, the most ancient and knowledgeable of the Nightsister clan used her power to stir the bodies of the Nightsisters graveyard. From preserved cocoons built to resemble the trees of Dathomir emerged mummified warriors. The shrieking zombies mindlessly attacked their enemies, swarming over battle droids in droves

A good feat to substantiate my theory: Asajj Ventress raising deads against Kenobi while not on Dathomir.


Do you really think that Ventress is more powerful or have more knowledge than Talzin? Of course NO.

Based on this, your scaling of Charal being above Daka and thus Talzin fall apart.

The second showing that you is Charal facing the Sunstar artifact. I will not challenge the claim that the Sunstar is able to make someone more powerful than Sidious even though this seems pretty ludicrous to me.
Nonetheless, you point the fact that this artifact can be depleted of its power, based on this and the fact that he had been used by Logray and maybe other users it seems pretty obvious that Charal did not tank the full power of the artifact.
Now there are two possibilities for you:

2°) Response to my claims


Dathomir acts a nexus for any type of Force Wielder, similar to Vjun. Luke was amplified by Dathomir and if I recall correctly, Dathomir was considered to be a dying planet at that time. About four centuries ago, the lowest rank of Nightsisters managed to make Yoda and other Jedi retreat, killing some of them in the process and I don’t see any reason why they shouldn’t be amplified by a healthier Dathomir’s nexus

Indeed, you are right, Dathomir is a nexus that amped everyone on it. However, how can we explain that Talzin was unable to sustain her illusion outside of the planet but is able to compete with Sidious on the Dathomir?
You have several possibilities to do this:

Lets think that you defend Theory 1. If so you need to explain how it is possible for Talzin to achieve such an insane growth. Basically this would have been faster than anyone in the Star Wars mythos, faster than Plagueis, faster than Sidious, faster than Anakin (the chosen one), faster than Luke... Clearly this idea seems more than irrealistic.

If you chose to follow Theory 2 or 3, in both cases you cannot scale at all Gethzerion from it in a neutral ground, thus all your theory of Gethzerion being above RotS Sidious fall apart.


This is a direct reference to her powers, not influence or anything and Palpatine considers to be her more dangerous off Dathomir.

Lets work on the different quotes:

(3) comes from a subjective point of view of Leia who did not have a clear idea of how powerful Sidious was. Thus she isn't a really reliable source.
(2) The quote call her something that disturb Palpatine, not something that can challenge him. To be honest, Palpatine is known to be a bit to scare of possible ennemy. For example, remember that he feared Ventress growing power... do you really think that Sidious will not godstomp Ventress?
(1) I agree on the fact that this quote can be legitimately interprate in favor of your theory. However it could also been interpreted in my sense. Sidious know that Gethz is powerful enough to use effeciently the force outside of Dathomir thus decide not to take the risk to let another powerful force user confront him in this era where the empire didn't need another ennemy. As a result he bottled-up her on Dathomir.

As you can see, none of your quote is a clear evidence that Gethzerion is a real threat to Sheev.


Which is basically the key word here, she doesn’t need the external sources to amplify her strength. I already explained this, Talzin and her clan were supplying their powers to a greater degree via Spirit Ichor by channeling through the Winged Goddess. Gethzerion didn’t use or any of them

What !? This is one of the most ridiculous think you have ever written. Even though Gethzerion is powerful outside of Dathomir, on Dathomir she is amp by the planet this is the way a nexus work: amplifying people near to it. Claiming the opposite is like saying that because he was really powerful, Sidious wasn't amp by the nexus of Byss...
And no contrary to what you claimed, you never prove that the witch wasn't amp, you just proved that she did not need any rituals or chanting to use her power, which is something that give her an advantage over her sisters.


The point is she didn’t just defeat Luke. She one-shot him effortlessly without Luke being able to counter or stand against her spell. As I posted above, I believe I don’t need to imply he was amplified to a great degree once again

Yes she caught off-guard Luke and thus was able to one-shot him. However, she was amped (more than Luke).
It shows that her spells are indeed a good tool however I highly doubt that this will put her above Revan or any other possible guys for this spot (such as Unutul, Darish Vol, The Hidden One, Vaylin, Revan,...)


And why should this quotes apply to Gethzerion and are valid? If you are to accept this quote, Exar Kun, Abeloth and many others also exist in the galaxy. Is Vader more powerful than either of them?

Can you explain to me why this quotes don't apply to Gethz?
Indeed I think that Vader is above Exar Kun at this moment (a spirit trap in a massassi temple and really far from his prime) and Abeloth dont exist at this period. She is still trap behind the veil. She is able to break free in the galaxy because Darth Caedus change the current.


BoD also made a fair point regarding this

BoD only pointed out the fact that one of the quote is subjective. but he agreed on the validity of the second.

Gethzerion is still below Revan and I am not convinced anymore by your demonstration.

@KelDorianUnit @The lord of hunger Thnaks to both of you.

Nah I don't think so. Round is almost over and I have to compete with 60 yo angry grandmas for stocking goods.

I vote for Geth.

KelDorianUnit wrote:Nah I don't think so. Round is almost over and I have to compete with 60 yo angry grandmas for stocking goods.