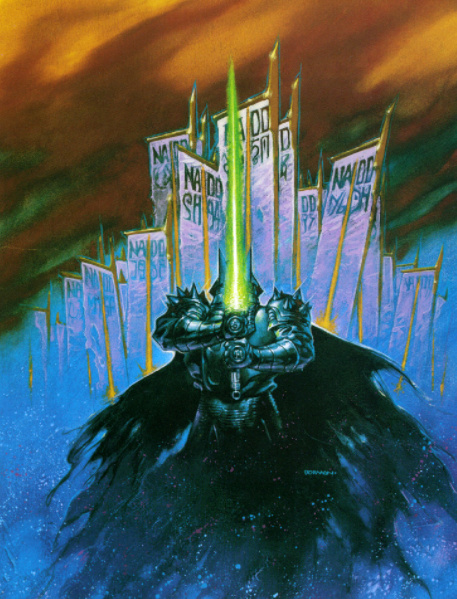 The most comprehensive compilation of the power of Warb Null on the internet, all behold the power of the leader of the Naddists loyal servant of his Majesty Freedon Nadd...

"And this new being that the merging of man and metal will create most definitely deserves a new name. I think 'Warb Null' will do nicely."
---

only the most powerful have a talent for Sith Magic and are able to bend the force to their will etc.

The Dark Side Sourcebook wrote:The most powerful Sith Lords possess a talent for the dark alchemy of the Sith. 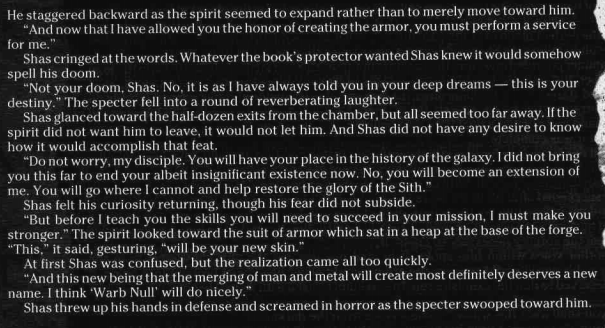 Edward M. Erdelac, Author of ‘Hammer’ wrote: The spirit which inhabits the spellbook which Shas Dovos uses to craft the Warb Null armor is never named, and I don't name him here, but I can't help but see an aesthetic allusion to Adas in the design of Null's ebony armor…

Null mastered the dark side, which he combined with his martial prowess 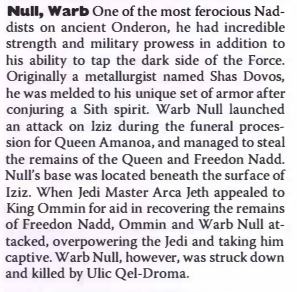 and being a Prodigious Warrior 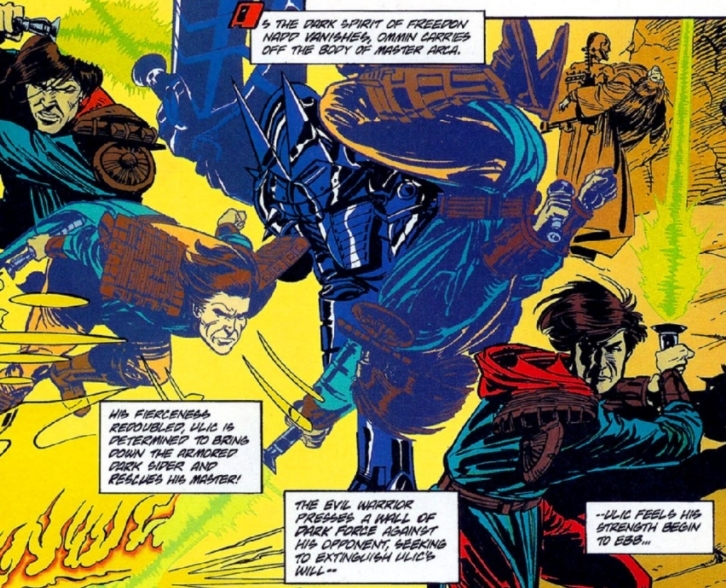 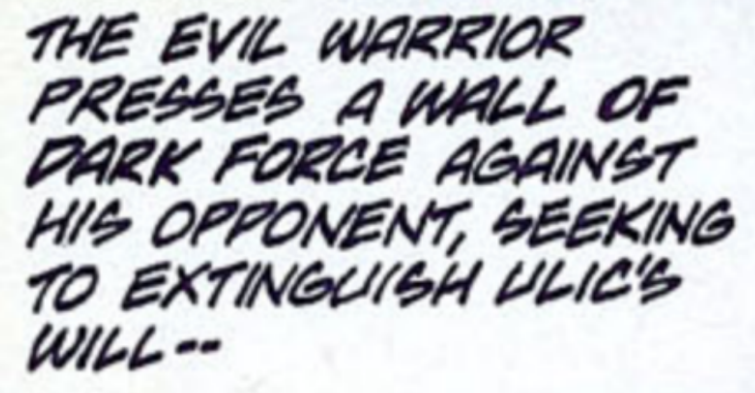 which he combined with his crushing blows

Through his armor Warb Null possesses all the Memories and therefore teachings of Freedon Nadd and the Dread King Adas, essentially inheriting a millennia of dark knowledge and combative mastery

Hammer wrote:Telloti knew the weapon in his hands. Somehow, he knew it. He had fashioned it. millennia ago. Or rather, the man in his vision, Shas Dovos, the man who became Warb Null, had, inspired by the dark teachings of Freedon Nadd and dread King Adas before him. He knew these things. He had their memories, their wisdom, the cunning of the Sith.

this means that all respective accolades from Adas and Nadd can also be attributed to Warb Null
I. King Adas
Null inherits Adas' great intelligence, fighting prowess and tremendous aptitude for Sith Magic

Evil Never Dies: The Sith Dynasties wrote:Ruling nearly 3,000 years before the rise of the Galactic Republic, King Adas was a massive, regal being encased in majestic ebon warrior armor. Raised from his youth as a chosen being due to the charcoal pigment of his skin, Adas demonstrated great intelligence, fighting prowess, and a tremendous aptitude for Sith magic. With his alchemically forged battle-ax, Adas led the bloody unification of Korriban's disparate nations and became its undisputed world ruler. The Sith people came to believe that King Adas was immortal and that his reign would be eternal.

as well as his knowledge of artifacts including Holocron's

Complete Star Wars Encyclopedia wrote:Adas learned to contain his knowledge in one of the first Sith holocrons

and the ability to conquer and subjugate Korriban

as well as Nadd's talent for Dark Alchemy

all the Jedi and Sith powers presented in the Tales of the Jedi, from all the Holocron's and Tome's

Tales of the Jedi Companion wrote:
"Freedon Nadd has knowledge of all Jedi and Sith Force powers presented herein as well as those abilities still hidden in ancient Holocrons and tomes."

Including but not limited to... 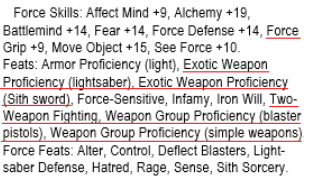 as well as all the following attributes from Nadd 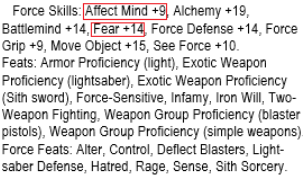 all Powers and Abilities Warb Null has access to : 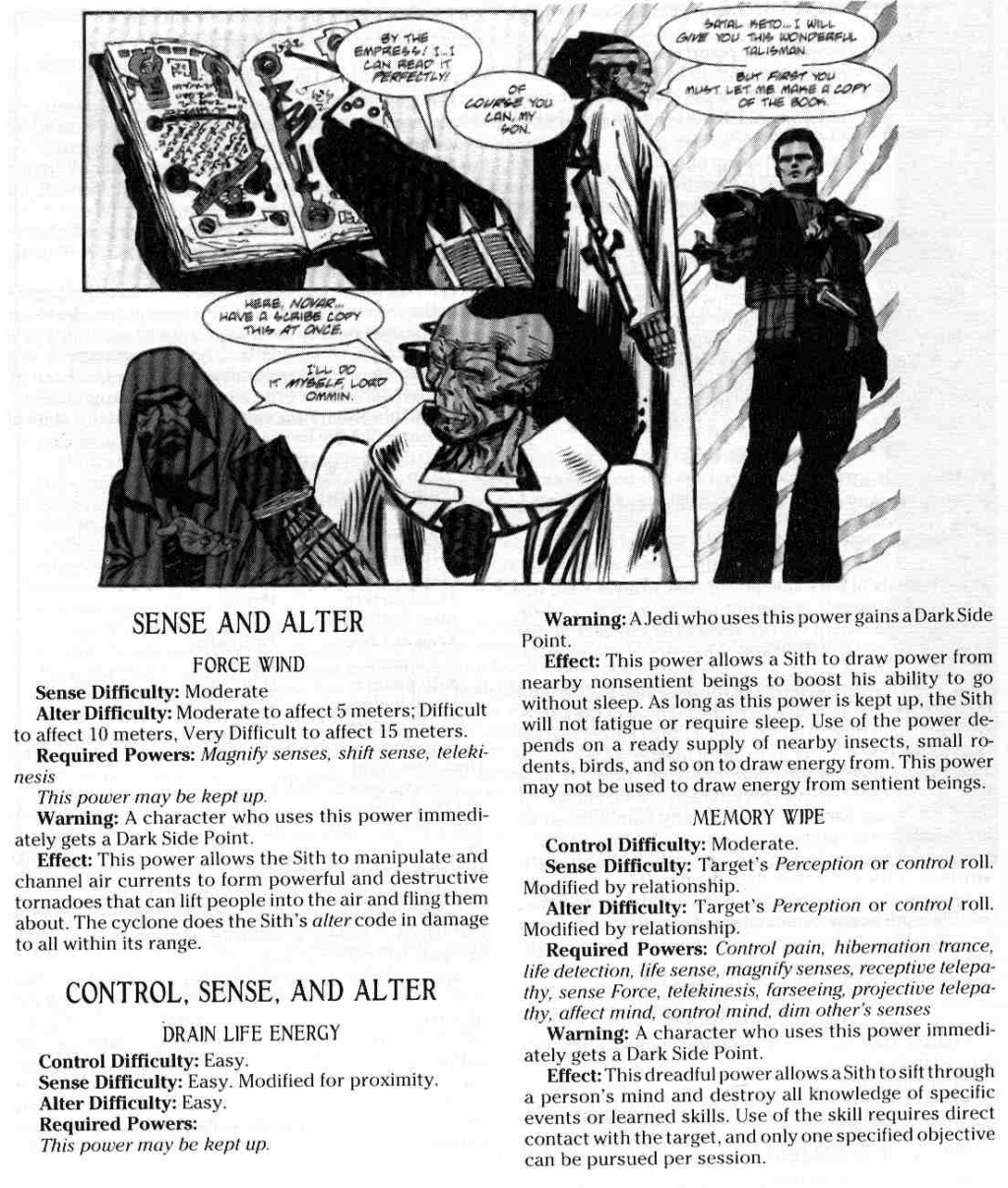 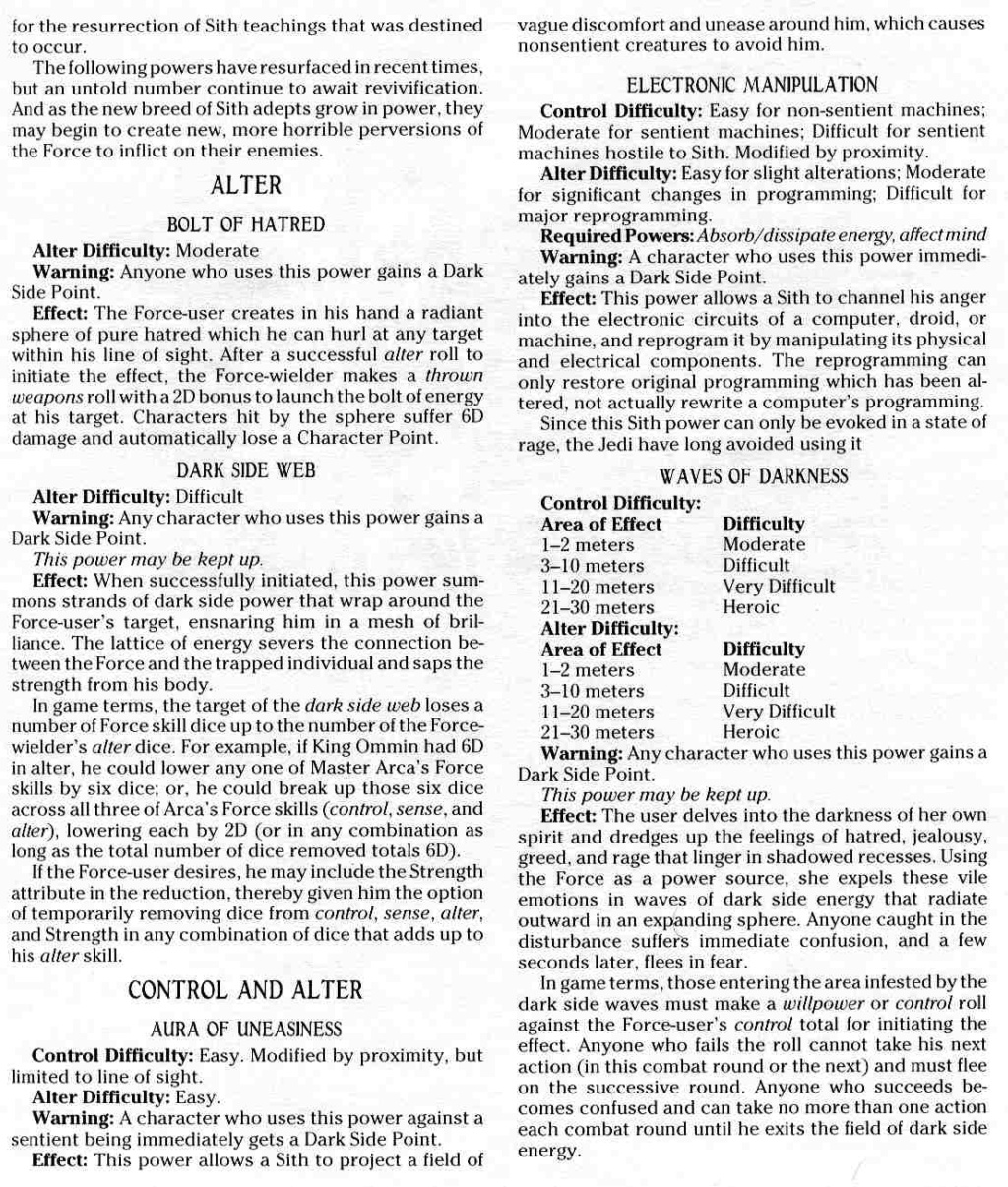 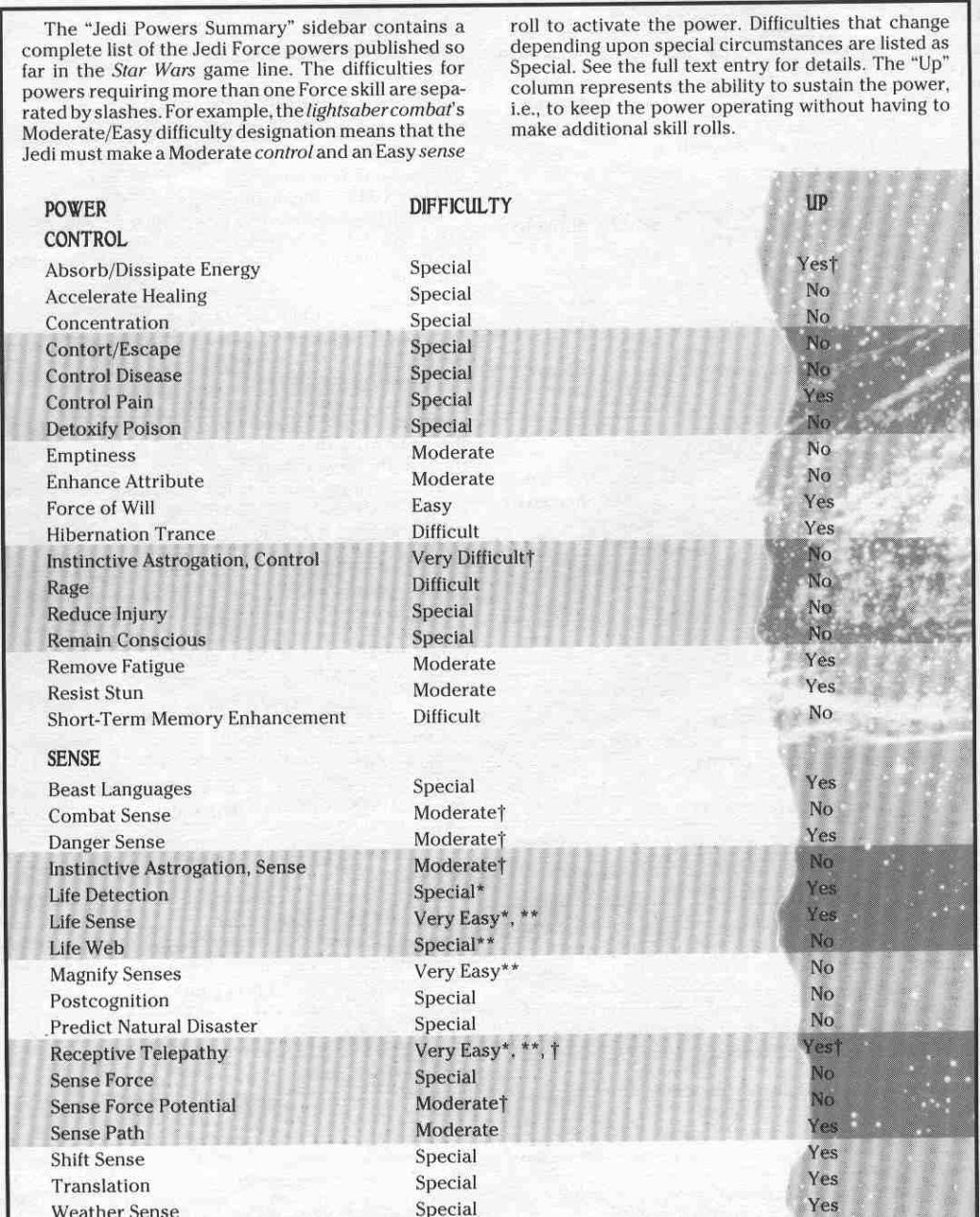 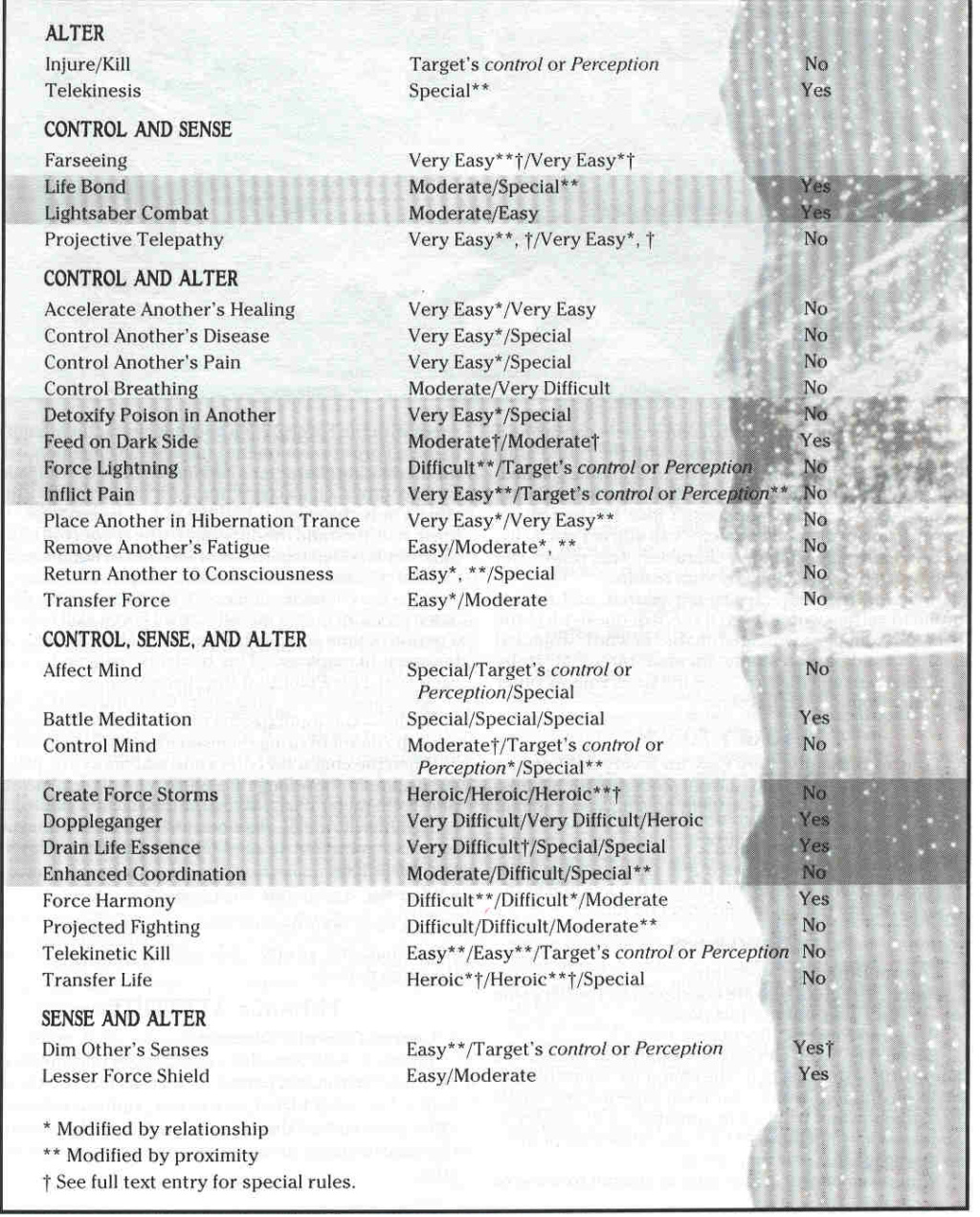 as well as what is listed for Null himself in TOTJ

Dark Side Imbued Items lose potency as time passes, to where in 1000BBY roughly 3000 years after the ancient times and 981 years prior to Null's Armor being rediscovered, Artifacts from the Ancient Sith only posses 'faint remnants' of the dark side 'just clinging' to them and are not just 'memories' of the old 'incredible power' they once held, but 'fading memories'

Darth Bane: The Rule Of Two wrote:They walked slowly along the length of the display cases, Zannah splitting her attention between Hetton's words and the intriguing array of Sith artifacts. She could still feel faint remnants of dark side energy clinging to them: fading memories of the incredible power they once contained.

Darth Bane: Rule of Two wrote:The room was part library, part museum. Shelves of ancient manuscripts and scrolls, and endless lines of old datatapes lined the walls, and there was a data terminal and large viewscreen in one corner. Several long glass display cases ran lengthwise down the center of the room, displaying the collection of Sith treasures Hetton had spent the past three decades acquiring: strange glowing amulets, small jewel-encrusted daggers, a variety of unusual stones and crystals, and the handles of at least a dozen different lightsabers.

the presence of dozens of dark side items in the room all work in tandem and increase the potency of the items in the collection, they empower each other through their mere presence, even if only barely,

so the items in Hetton's collection have lost less potency than an Item that is not surrounded by other dark side items, like Warb Null's armour which was sat by itself on a remote planet away from any activity for a full 3978 years...

so if by 1000BBY Dark Side Items from the ancient times that have experienced less decay than normal items have their dark side potency all but gone, after roughly 3000 years of decay, then a secluded item with roughly 1000 years more decay should have lost approximately a further third of its potency, from the time where the proximity amped items only possessed 'faint remnants' and 'fading memories' of power clinging to them,

Thus by 19BBY Warb Null's armor should contain a tiny miniscule amount of the power it contained in 3998BBY. Furthermore when the armor was uncovered it was not even complete, it had a huge gaping scar across the neck and a full missing arm, so minus that from the already tiny amount of power the armour contains, now it has even less than that

despite all of this when the armor was uncovered in 19BBY, Telloti, the Jedi who found the armour mused that the armour contained 'real power' like he had never felt before

Hammer wrote:“Why shouldn't he take the armor? It had power. Real power. He could feel the Force like never before.

Hammer wrote:He had always thrilled to Master Piell's stories of Jedi Knights and their clashes with Sith

and can sense his force signature/aura 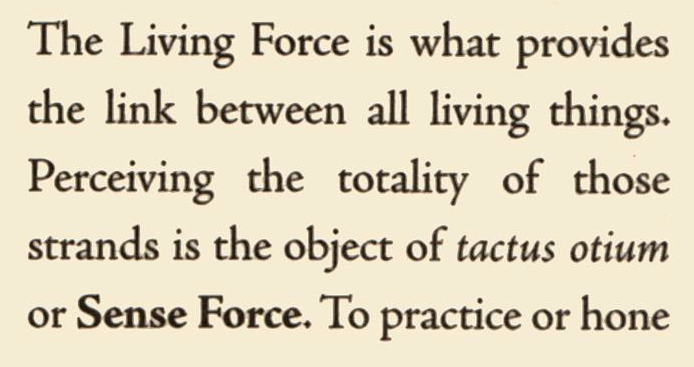 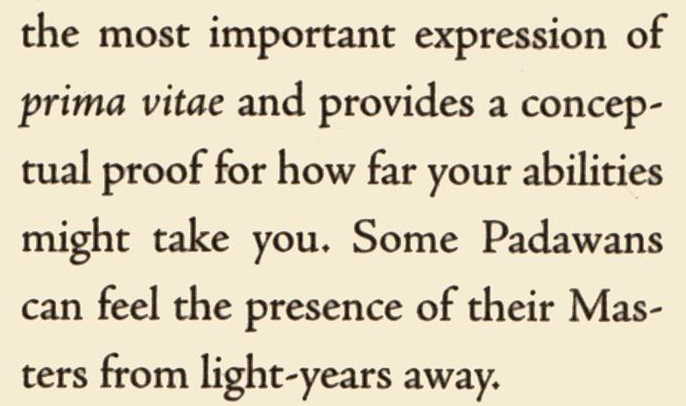 High Council masters being the greatest of the order 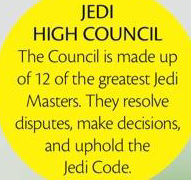 Not only this but Piell is a senior member of the high council, revered for their strength in the force 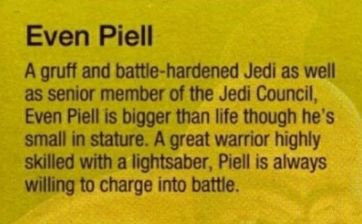 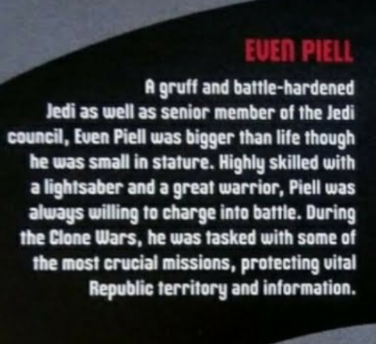 Star Wars Official Fact File wrote:"Although there were often some members of the Council considered to be senior to the others, these in fact had no more power, and all important decisions were always made with consultation of all 12 members. Jedi were regarded as senior only due to their connection to the Force and wisdom in interpreting its will."

Even is one of the most powerful Jedi of the Order

Hammer wrote:"As soon as his fingertips touched [Warb Null’s lightsaber] it, a wave of cold air blew over him, through his clothes, his skin, through his very soul. He shivered."

Hammer wrote:"When Telloti opened his eyes again, the helmet was in his hands, poised over his head, its dark iron hood casting a shadow over his blinking eyes. Inside, secret glyphs glowed with orange light, waiting to brand his cheeks, imbue him with their power."

Hammer wrote:Master Ryelli stood in the door in his brown robes. His lightsaber hummed in his malformed hand. “Take that off, Telloti,” Ryelli urged, a tremor of something in his voice. Fear? It excited him to think a Jedi Master was afraid of him.
“It’s of the Sith. This place… it’s a tomb of some kind. That armor.. it’s infected with the dark side of the Force.”
The dark side? With this kind of power, he could be a hammer to crush the dark side. What did Ryelli know? He had no insight at all. Why shouldn’t he take this armor for himself? It had power in it. Real power. He could feel the Force like never before.

Hammer wrote:With it, he could be a warrior. He could join the war, cut his way through legions of battle droids and take the Count of Serenno’s head, be the hero the Republic needed. 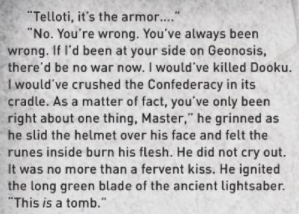 The Youngling Telloti then proceeds to dominate Master Ryelli in a duel, this is a YOUNGLING who failed his apprenticeship trial to become a Jedi Padawan so the power of Telloti is a non-factor here

Hammer wrote:Staguu Itincoovar had failed his Apprentice Trial as well

Hammer wrote:The armor was like a web of conduits. It drew the Force into him. Telloti felt it surging through his blood vessels, contracting muscles, swinging his arms up to defend the downward stroke of Ryelli’s lightsaber almost before Telloti could even think it. He was fast. So fast. And strong. He drove Ryelli back with shuddering blows. the emerald lightsabers flashed and buzzed as they clashed and were batted aside. inadvertently hewing chucks of glowing stone from the walls.
Telloti grinned ecstatically behind his grim metal face. His heart thundered.
Ryelli seemed so small now. Was he himself larger? He felt immense. Ryelli’s blade skimmed his shoulder, sending sparks cascading into the air. He laughed. He hadn’t even felt it. He forced Ryelli out into the corridor, and there locked blades with the Jedi Master. Master. What right did he have to that title? This squinting bookworm? This ditch digger? He looked for greatness in small, broken things, and failed to recognize it when it towered over him.

Hammer wrote:Telloti knew the weapon in his hands. Somehow, he knew it. He had fashioned it. millennia ago. Or rather, the man in his vision, Shas Dovos, the man who became Warb Null, had, inspired by the dark teachings of Freedon Nadd and dread King Adas before him. He knew these things. He had their memories, their wisdom, the cunning of the Sith.
His bare thumb felt along the length of the two-handed hilt to a small toggle, and as Ryelli forced his superior position, bearing down with all his strength,
Telloti triggered it and sidestepped.
The extra-long green blade of the ancient lightsaber retracted into the hilt. In the same instant, the butt sprang open like the maw of a sarlacc, revealing a hidden, secondary emitter. A blade of red energy erupted from it, the ingenious mechanism within realigning and refocusing the power in a nanosecond.
Without the resistance of the green blade,
Ryelli stumbled forward, dangerously off balance. Telloti shifted his grip and flipped the new red blade over, slicing neatly through the nape of Ryelli's neck. The Jedi Master tumbled to the floor.
Telloti straightened, listening to the sound of his own breathing, feeling his heart pounding deep behind the black shell of his breastplate.

for reference Jedi Master Ekim Ryelli is an esteemed Master and Geonosis Arena Veteran, who fought brilliantly in the arena despite being an archeologist and not focusing on combat. 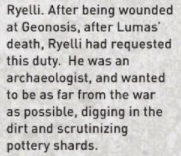 Attack of the Clones Novelization wrote:But even with that, even with all of the remaining Jedi fighting brilliantly in the arena, the droids continued to press in, herding them all together in a hopeless position.

a nanoscopic amount of Null's power is, in comparison to masters Ryelli and Even Piell, real power and just utterly superior, Warb Null is utterly supreme, kneel before his might, the showings in Hammer from 2014 act as an anchor raising the TOTJ Era greatly in the hierarchy, the content being from 2014 means that Null is not actually capped in accordance with LFL Policy

I will add to this with anything new that may come up.

Nice respect thread. The might of the ancient Sith is showing up.