Message reputation : 100% (2 votes)
Again a thread for an obscure character. Vhonte Tervho is a member of the Cuy'val Dar, the group famous for training the clone army. Why I chose Vhonte in particular as the first member to make a thread of? Don't know, I like the character design. 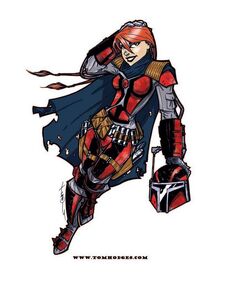 Republic Elite Forces – Mandalorians and Omega Squad wrote:"Fett seeks out the very best Mandalorian warriors from every corner of the galaxy. These sergeants will train the commandos to fight and lead, and instill in them the Mandalorian values of iron discipline and loyalty."

By a multitude of sources, the Cuy'val Dar are confirmed as the greatest mandalorian warriors in the galaxy.

Star Wars Insider 84 - Guide to the Grand Army of the Republic wrote:"Jango Fett trained the ARC troopers personally and then secretly recruited a hundred experienced Special Forces veterans to train the Republic Commandos."

All members of the Cuy'val Dar are experienced Special Forces veterans.

The Clone Wars Campaign Guide wrote:"These "clone commandos" are individually trained by a hand-selected team of mercenaries and Mandalorian soldiers - the Cuy'val Dar - in numerous specialized tasks, such as demolitions, computer slicing, infiltration, and sniping, until they can function in purpose-oriented four-clone squads, or as needs arise, individually."

Republic Commando - Hard Contact wrote:"You're the best in your field—the best soldiers, tacticians, sappers, communicators, survival experts. I picked you personally because I want you to train the best commandos in the galaxy. You'll have everything you need, whatever you want, except one thing—home. This is a top-secret project. You'll not tell anyone where you're going and you'll not leave Kamino, ever. As far as your friends and family are concerned, you're already dead."

The Cuy'val Dar were hand-picked by Jango, since they were the best in their fields. This means that they're specifically the best warriors in the galaxy. As a member of Cuy'val Dar, Vhonte would also be one of the best (rivaled only by other members) in demolitions, slicing, infiltration, sniping, tactics, sapping, communications, and survival, as well as generally being a soldier.

Star Wars Insider 84 - Guide to the Grand Army of the Republic wrote:"The survival rate of the Mandalorian's trainees in combat was significantly higher than those trained by non-mandalorian sergeants,"

The mandalorians also seem to be greater in these skills than the non-mandalorians, meaning that the 75 mandalorians are greater than any other mercenaries/soldiers/etc. in the galaxy.

Now onto the more personal scans for Vhonte:

SO UNCIVILIZED: GREAT GUNSLINGERS IN STAR WARS wrote:"He was educated in combat both by his father and by seventy five of the greatest warriors of their era, Jango’s Cuy’val Dor, which included the fierce Mandalorian outlaw and gunslinger Vhonte Tervho."

SO UNCIVILIZED: GREAT GUNSLINGERS IN STAR WARS wrote:"Some are paper nexu, with no grit to back up their talk. For every Gallandro or Boba Fett there is a Swifty Yonsen or a Jodo Kast. Some shun celebrity and go unsung, like Vhonte Tervho of the Cuy’val Dor, who passed her phenomenal prowess with a pair of DC-17s on to thousands of elite clone commanders during the Clone Wars. Some, like Cemma The Younger, Shoto Eyefire, or Glott, never make much more than a passing story or two in the local holonews before they burn out. "

Here's there three things to note:

First off, Vhonte is compared to Gallandro and Boba Fett, as a legend who shun's celebrity, whereas they're famous bounty hunters. This is definetly high praise, as Boba obviously is an incredible gunslinger, and those that don't know Gallandro, can look here: https://www.suspectinsightforums.com/t1721-gallandrolegends-respect-thread?highlight=gallandro . But long story short, he's Han Solo's superior.

Secondly Vhonte is an unsung legend by choice, yet a number of others are noted as failures in comparison to her and Boba/Gallandro. Most notable of these is Jodo Kast, who while not as skilled as Boba (obviously), was skilled enough to pass for him, note that he never misses, and even get a hit on him: 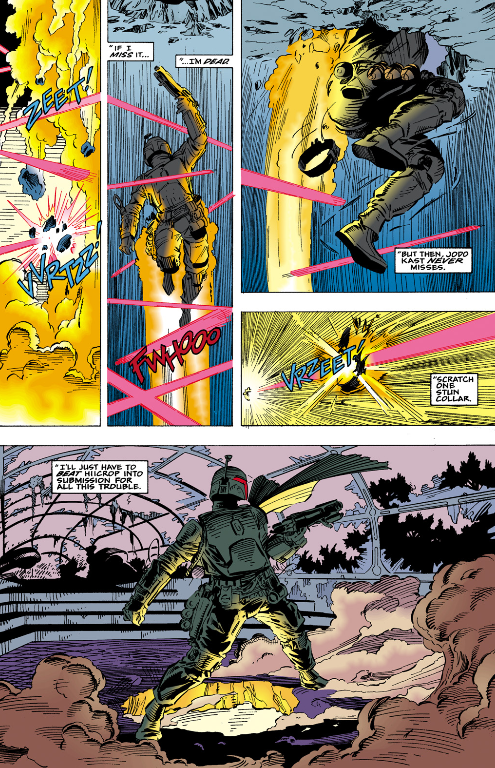 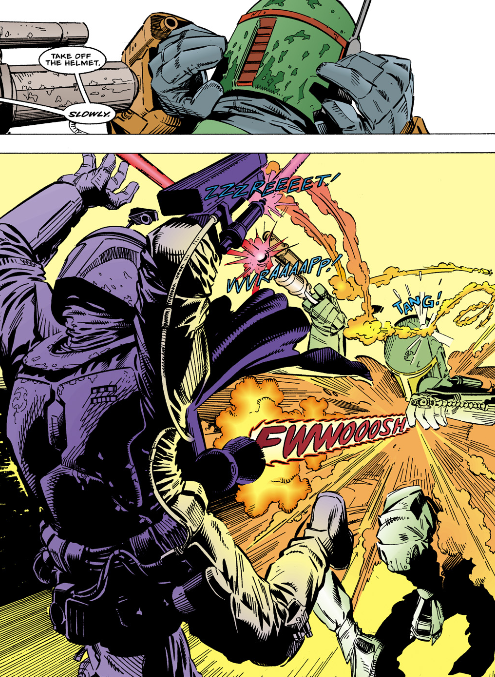 Yet by comparison with Vhonte, he's a "paper nexu, with no grit to back up their (his) talk".

Finally, she's noted to be phenomenal with her blaster pistols, and to have trained clone commanders to do the same. Which means she likely could replicate gunslinging feats from clone officers like Cody. 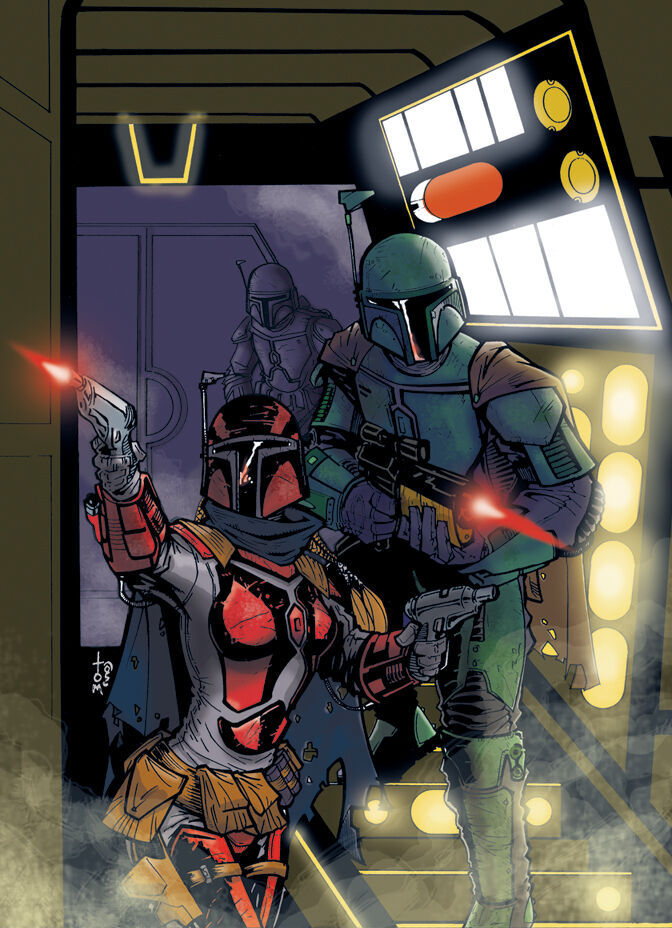 In official art Vhonte is seen leading a group of mandalorian mercenaries, suggesting she's the best. 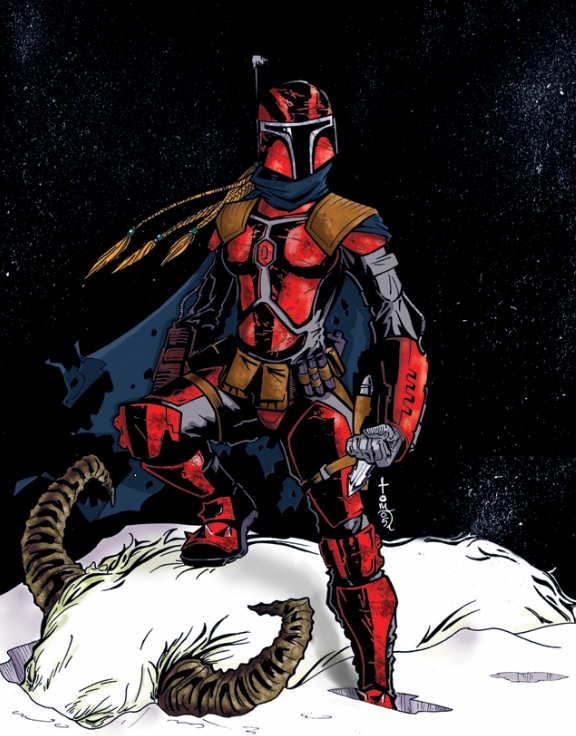 In official art, Vhonte is seen having killed a wampa-like monster with a vibroknife attached to her vambrace. Knowing of the strength and durability of wampas, this would be a superhuman feat, as even Luke needed a lightsaber to beat one.

FIN
Yeah and thats it. Told you she's obscure. Hope you enjoyed the read anyways