Travgen Served the Galactic Republic and Jedi Order as a Jedi Knight, later becoming a Dark Jedi, after Order 66, he survived being hunted

Star Wars Adventure Journal 14 wrote:Not all Dark Jedi or evil Force Magicians were servants of the Emperor. some were as hunted as the Jedi Knights, one of these, Travgen

Being 'as hunted' as the Jedi implies that Travgen likely encountered and had to fend off The Emperors Inquisitorius, and possibly even Lord Vader himself

Travgen senses the arrival and departure of Luke Skywalker on Ossus

Travgen is almost as twisted as Emperor Palpatine was

Star Wars Adventure Journal 14 wrote: The Dark Jedi isn't nearly as powerful as Palpatine was, although almost as twisted

for twenty years Travgen hones his skills by practicing and meditating

for twenty years Travgen oppresses the local tribes of Ossus

This is important because these Tribes of Ossus were the Ysanna, a race of highly force sensitive beings whom Luke Skywalker mused could all be potential Jedi

Dark Empire II wrote:Every one of these people could be a potential Jedi

Star Wars: Databank - Vjun wrote:Three Ysanna prisoners from Ossus were taken to Vjun to serve as raw material in creating new clone bodies for Emperor Palpatine. The Ysanna were frozen in carbonite to await the future construction of a clone laboratory in Bast Castle

And all these years of practice, meditation and oppression made Travgen as powerful as Dark Empire Luke Skywalker

Star Wars Adventure Journal 14 wrote:he is about as powerful as Luke (as of Dark Empire)

This is incredible and makes Travgen one of the most powerful Dark Jedi, in Galactic History 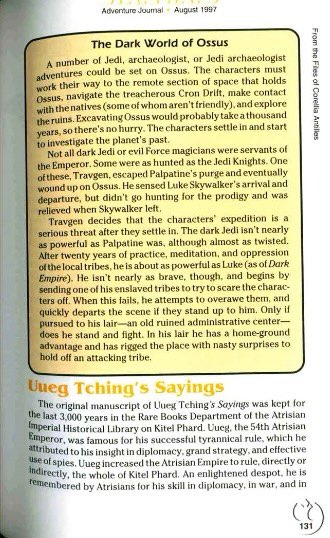