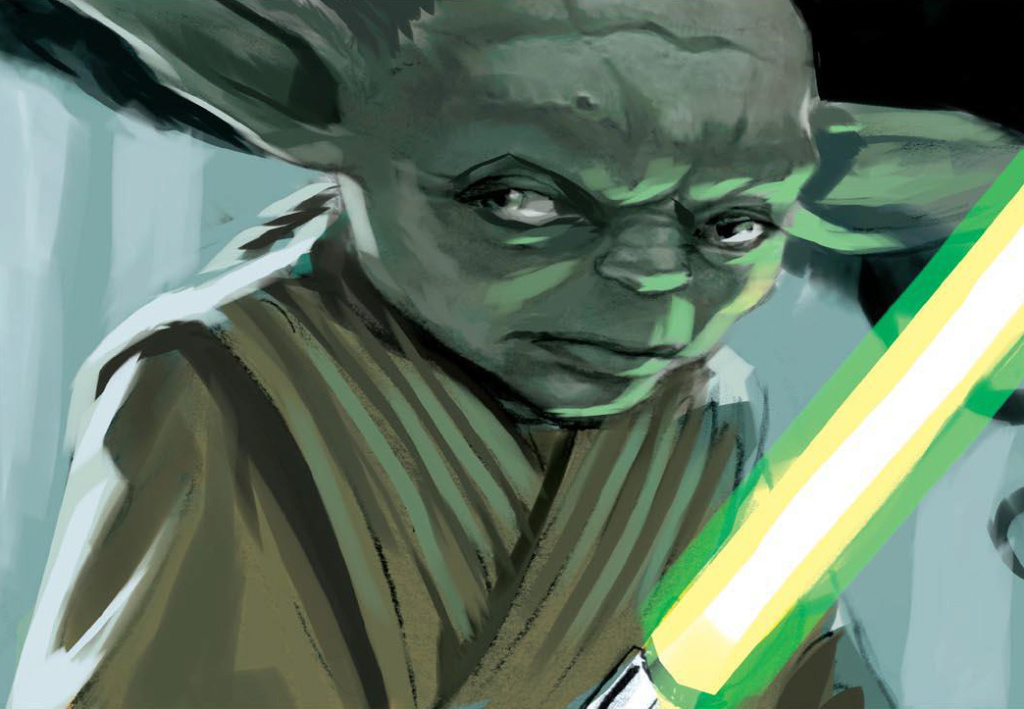 Belonging to the same species as Grand Master Yoda, Minch shares the known traits of his species being very wise and sharing a similar affinity for the Force due to the nature of his species possessing unusually high Midichlorian Counts

Star Wars: Attack of the Clones: The Ultimate Illustrated Guide wrote:All known members were very wise and had extraordinary Force Potential, Most of them, though not all, spoke an idiosyncratic dialect of utilizing nonstandard grammar and formalized sentence construction. Members of this elusive species were rarely seen in the known Galaxy

Star Wars: The Legendary Yoda wrote:Yoda's ability to use the Force is greater than that of any other Jedi.

The Phantom Menace wrote:Over twenty thousand, not even master Yoda has a Midichlorian count that high

George Lucas wrote:"I never really figured out where he came from, what his species is called… he's a mystery character. He's a magical character. He has no background. He comes and he goes. He's the subversive secret mysterious stranger that enters the film and then exits at the end." 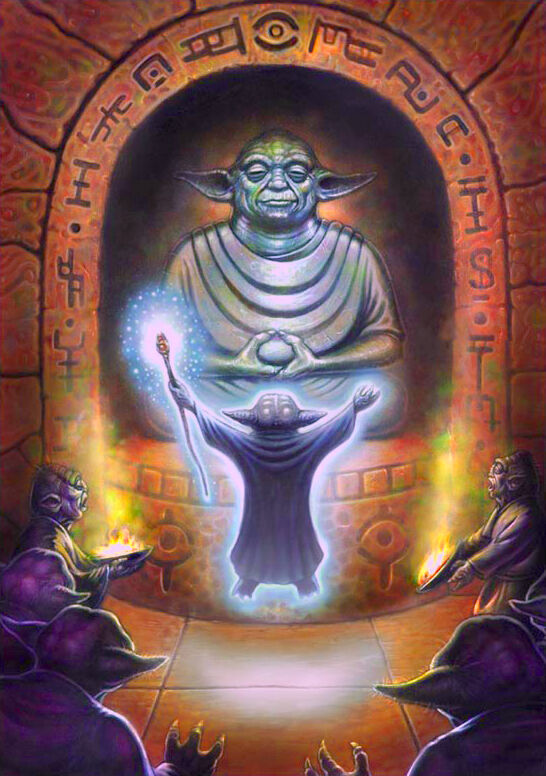 THE POWER OF MINCH

A Jedi Knight, Minch was part of the Jedi Strike team assembled by the Jedi Council and tasked with hunting down the Cult of Bpfasshi Dark Jedi that threatened to take over the Bpfassh System.

It is likely the Jedi Council dispatched their greatest and most trusted members to eliminate the Dark Jedi threat for good, Minch being one of them, this is a good indication that Minch was amongst the most promising and most powerful Jedi of his day, especially considering he is a member of Yoda's Species and is very wise. This is important seeing as these events took place in 700 BBY meaning Yoda was alive at the time, being about 200 years old, (likely the same age as Minch, seeing as Minch was originally meant to be Yoda himself) seeing as he was sent on this important mission and not Yoda implies possibly superiority, at the time.

Minch displays a keen affinity for Force Sense, being able to track down the Bpfasshi Dark Jedi Master by searching for him through the Force this is impressive as the Dark Jedi Master was likely hiding his presence, seeing as he was trying to escape and hide. 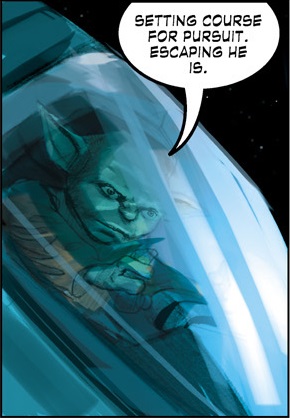 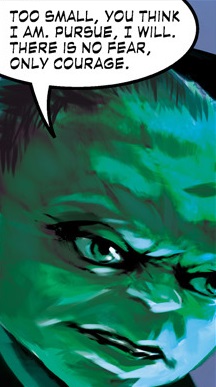 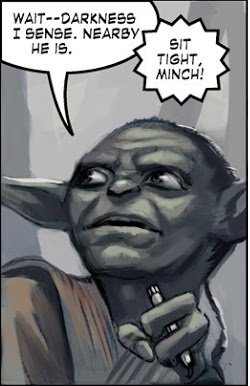 Both the Dark Jedi Apprentice and the Masters first reaction was to run from Minch, indicating his Force Aura is very powerful to the point where they deemed their best option was to flee 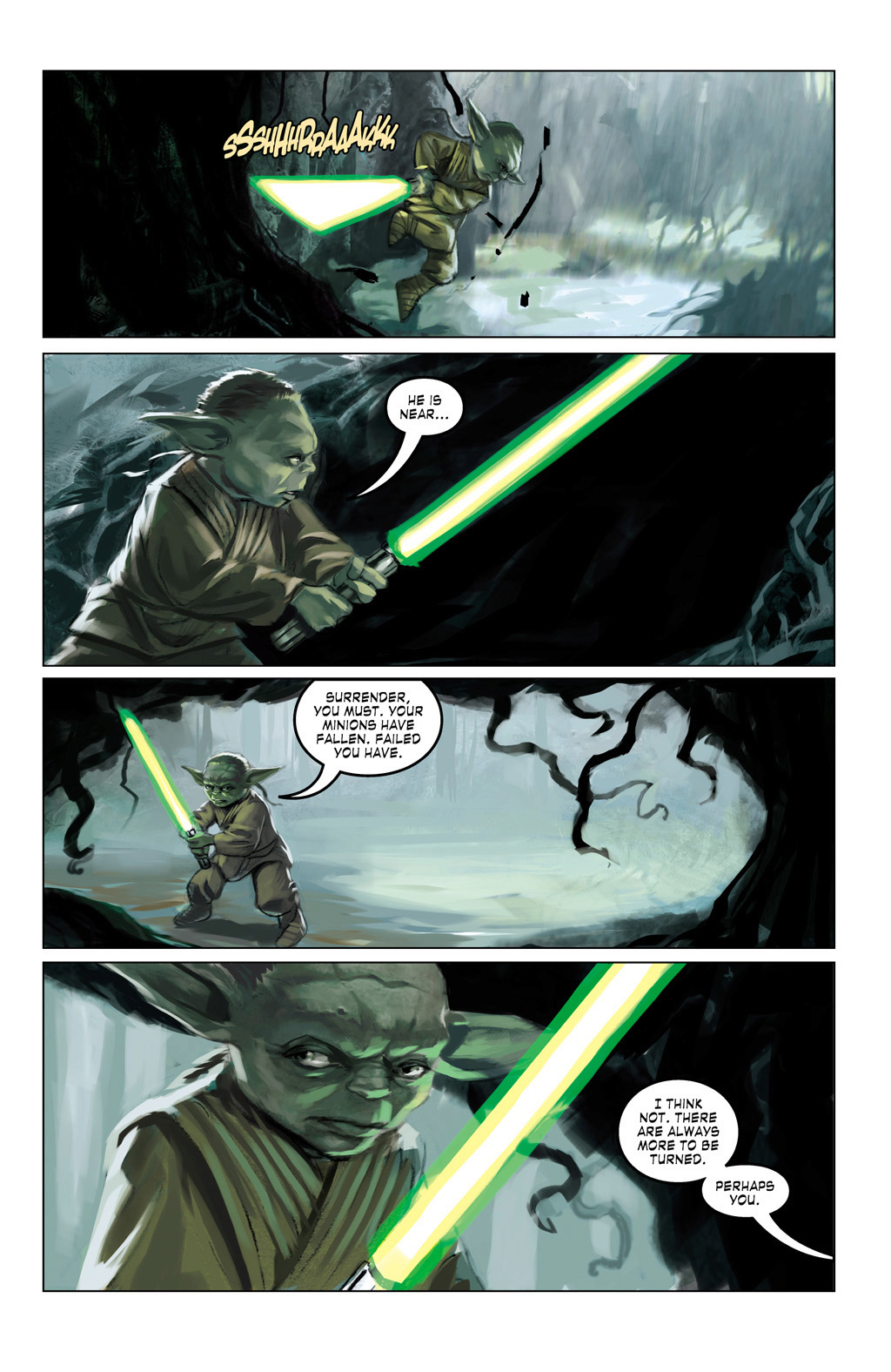 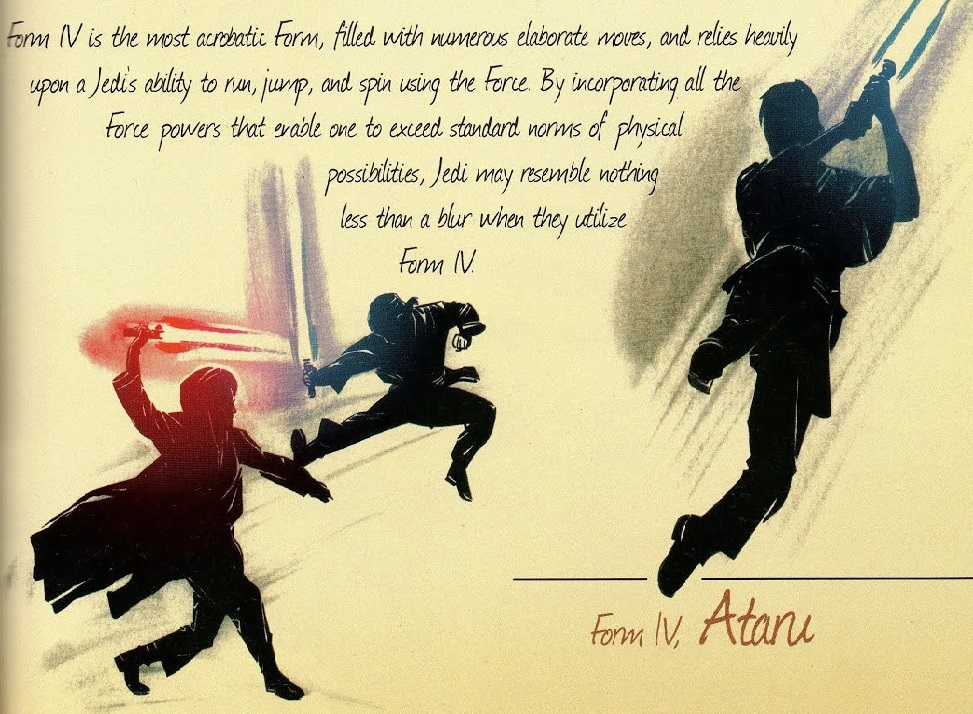 Minch corners one of the Dark Jedi and engages him in a duel in which they fight evenly.
From what we know this is Minch's very first serious duel with an actual Dark Side adapt that is not just a training spar at the Temple 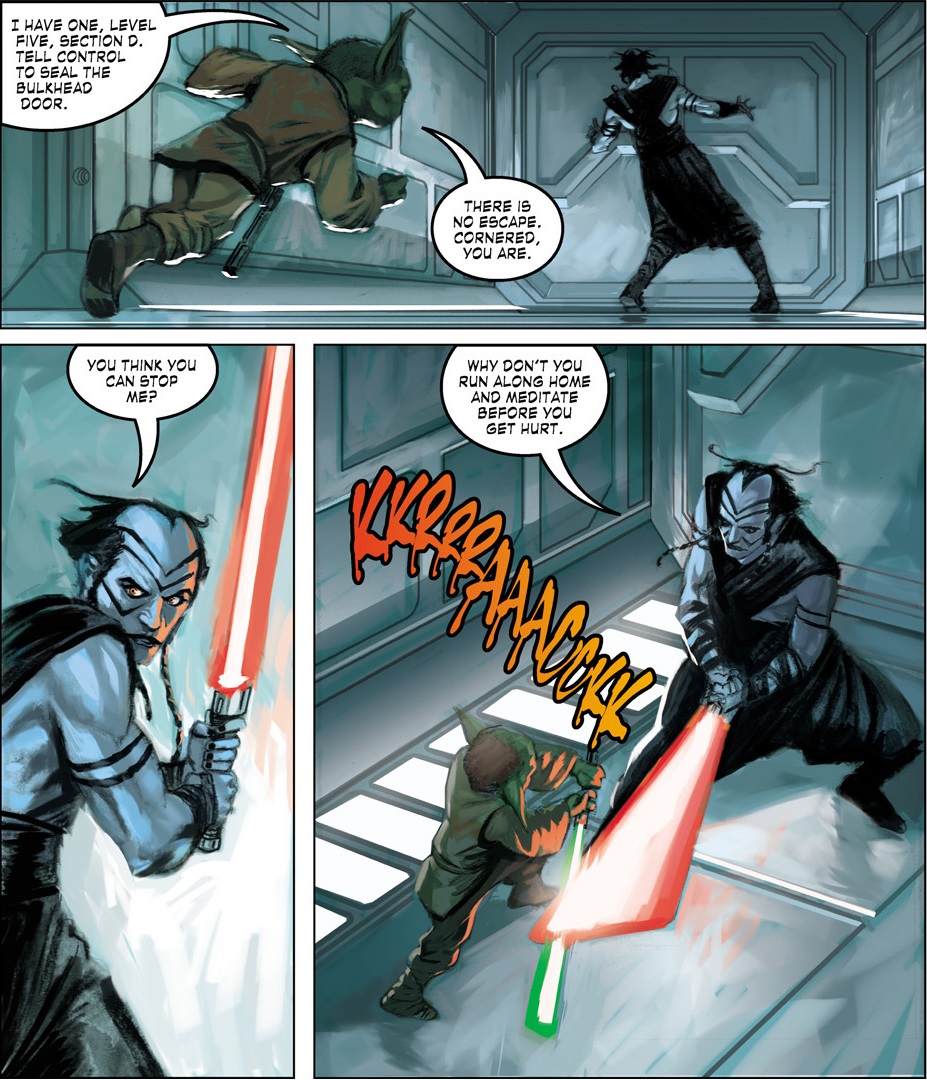 Minch holds his own and the fight goes on... 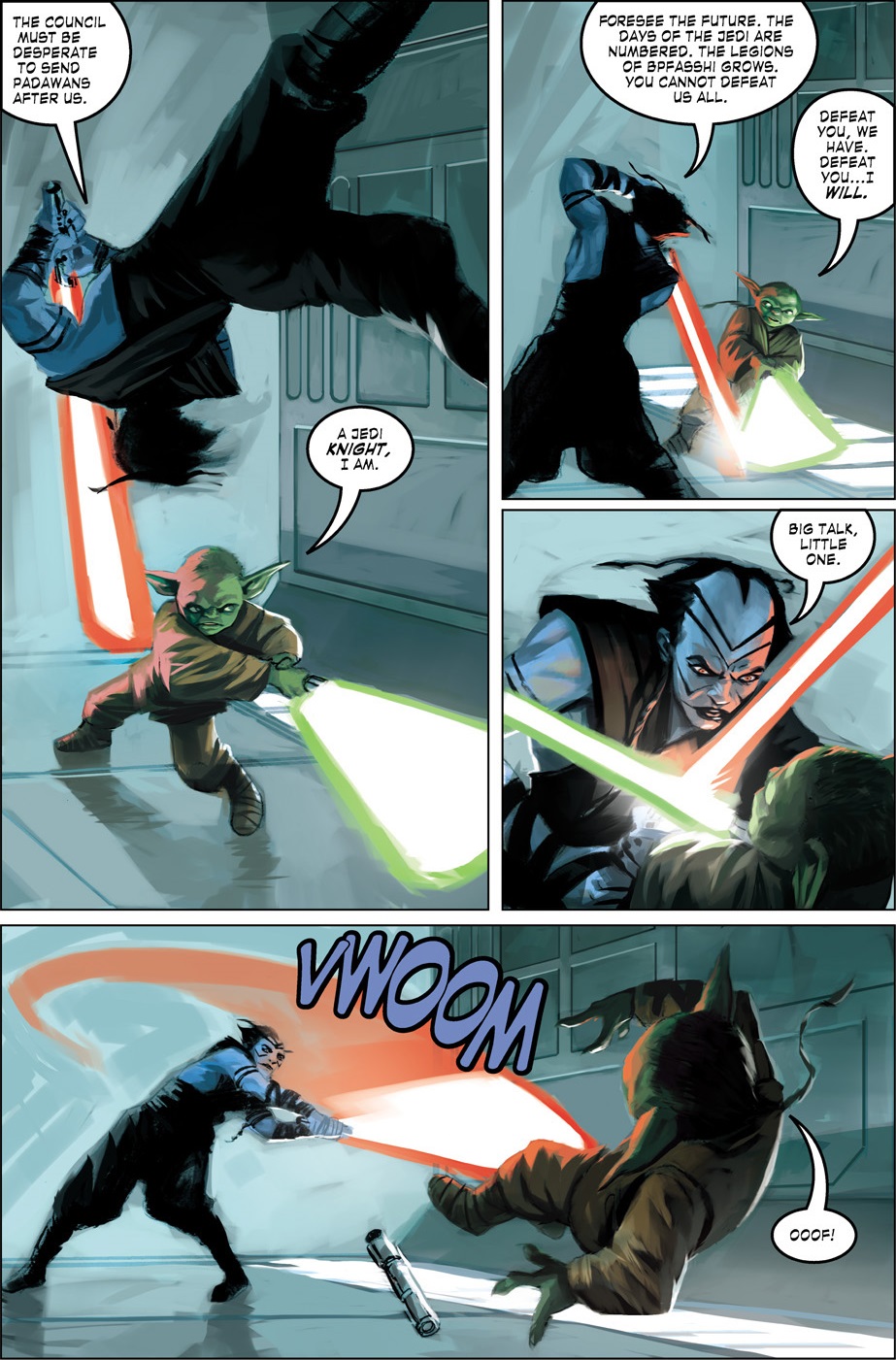 Minch seemingly underestimates the powers of these Dark Jedi and is launched back. This defeat is clearly a result of Minch underestimating his opponent as this is his first serious duel and being unfamiliar with a way to properly counter the opponents fighting style, it is also very possible Minch is holding back not knowing how to properly utilize his emotions and apply them to bolster his combative ability, he is also not utilizing his acrobatics to compensate for his short stature in this duel, this all becomes evident from his later showings on Dagobah...


After tracking down the Dark Jedi Master...

Minch is now giving more into his emotions...

Minch duels on par with The Master for a short time before being overwhelmed by fear and the power of The Master... 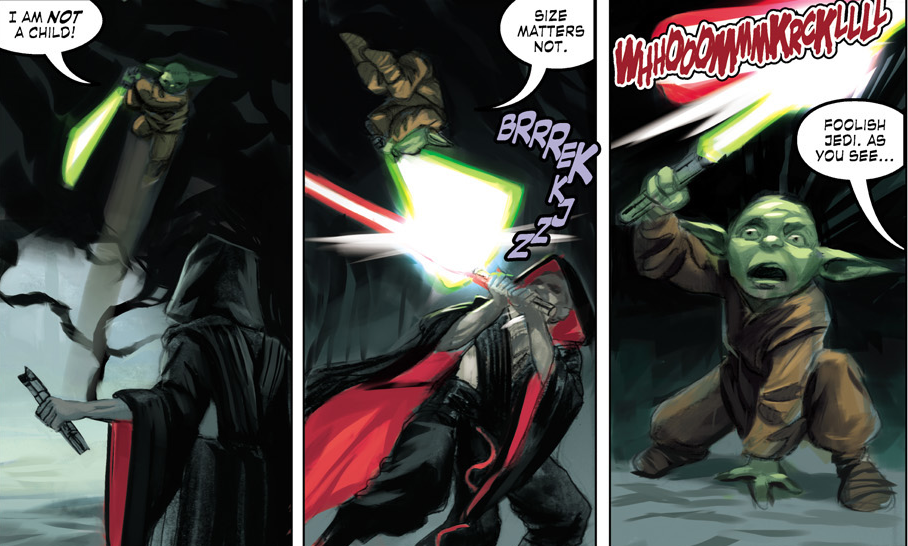 The Master clearly has the upper hand at this point, Minch is currently not using his emotions to bolster his ability being overwhelmed by fear. 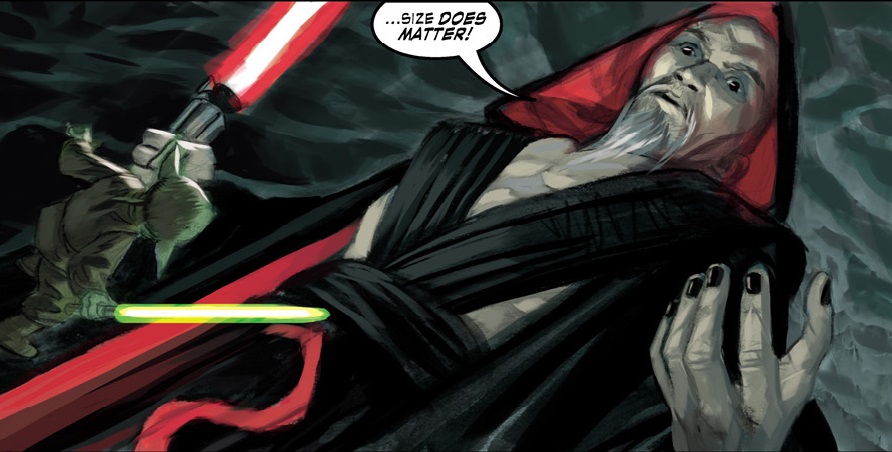 It is clear from the Imagery now that Minch has the massive upper hand in the duel with the small figures displaying the Master being insignificant to the size of Minch, the imagery makes it clear at this point Minch's power he is displaying dwarfs that of the Master's.

The imagery here largely makes it seem like these small figures no longer represent the Master so much as it does the power the Dark Side promised which is tempting for Minch and nearly consumes him. this plays out much like the Cave scene with Vader in ESB 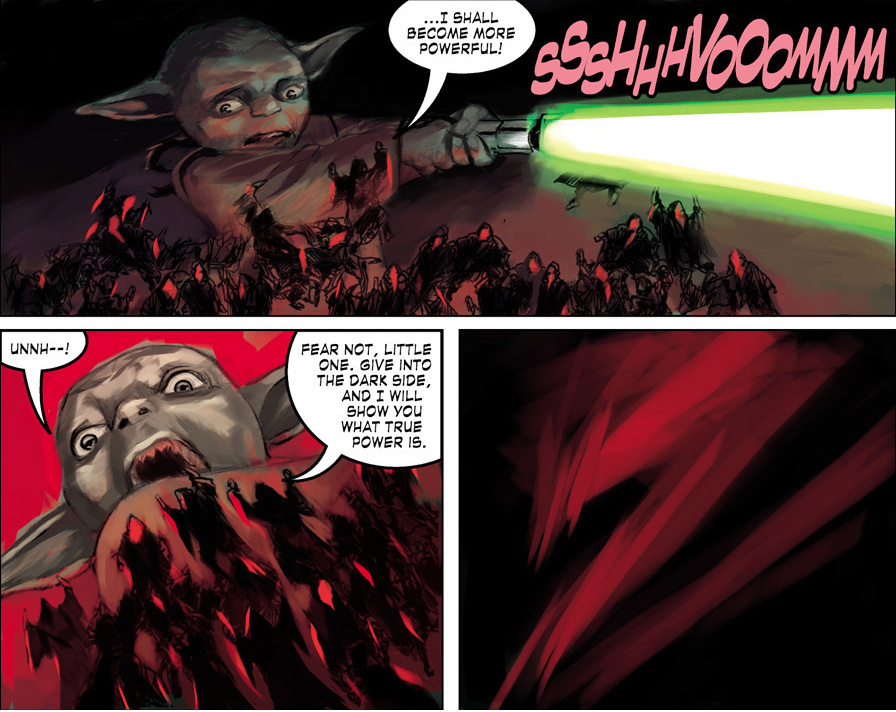 He defeats the Master in combat while almost falling to the Dark Side in the process, cutting loose too much with his emotions 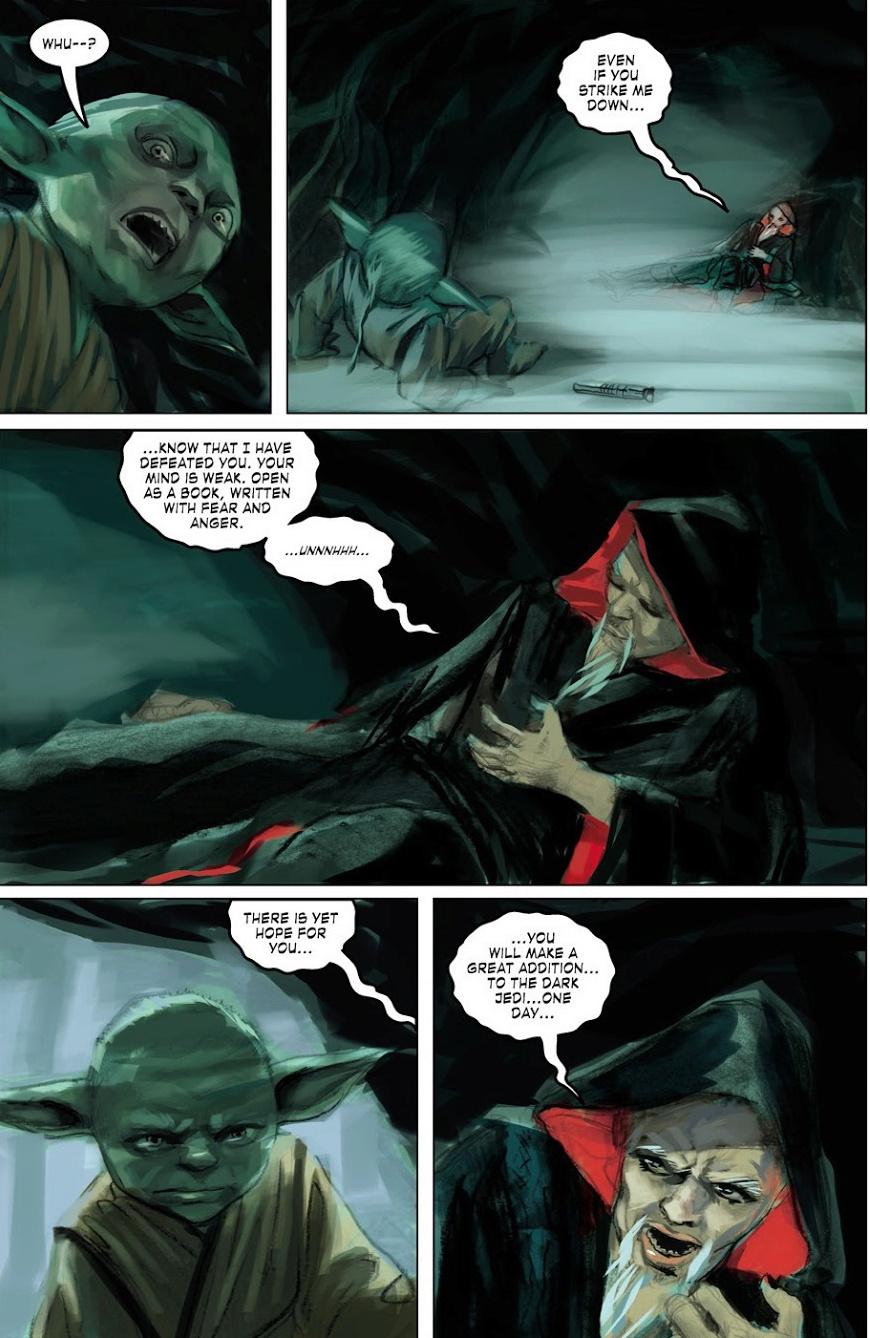 After his defeat the Master muses that Minch would "make a great addition to the Dark Jedi one day" before he dies. 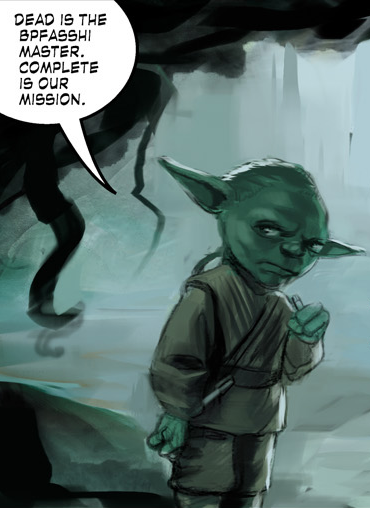 This Conflict forever Changed the Balance of the Force.

After Minch defeated the Dark Jedi, the Cave on the Planet Dagobah was permanently transformed into an incredibly strong dark side nexus

The Complete Encyclopedia wrote:Minch managed to defeat the Bpfashhi Master in a cave on the Planet, and the Dark Jedi's tainted blood seeped into the ground and imbued the planet with dark side energy.

This makes this showing MUCH more impressive, seeing as this Dark Jedi Master was powerful enough for his blood to caused the cave to become a dark side Nexus, his death leaving a permanent Nexus in that area being described as intense and very powerful clearly powerful enough to stand out amongst the general force nexus that is Dagobah, overpowering the Dagobah Nexus being a prominent focal point of power on the planet

Force and Destiny Core Rule Book: Nexus of Power wrote:The forgotten world of Dagobah hold a small but intense verge in the force, in the form of a mysterious tree cave

Force and Destiny Core Rule Book: Nexus of Power wrote:The verge is small in area, but it is very strong in the Dark Side of the force. despite this, its presence in the force seems to ebb and flow according to its own manner of being

Force and Destiny Core Rule Book: Nexus of Power wrote:Those entering the cave become subject to the dark forces of the vergence for the duration their stay...The vergence tends to confront individuals with their worst fears

Force and Destiny Core Rule Book: Nexus of Power wrote:The cave is not just dark but evil, it selects and twists the visions it presents to induce the worst possible outcome

A feat like this being accomplished only by notable figures like Emperor Palpatine (on Endor), meaning that the Master was incredibly powerful making Minch's showings against him VERY impressive.
Note that this Dark Jedi would not be locked below any Sith (like Maul and Sidious) due to him being a Dark Jedi so considering this feat it looks very likely the Dark Jedi Master is one of the most powerful force users of all time and Minch even more so having defeated him. And bare in mind Minch was only a Jedi Knight of age 200 (young for his species) at the time, so this will be massively before his prime. 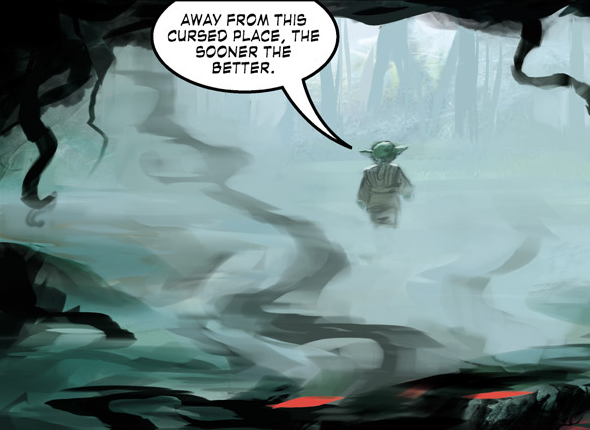 This is nice, but I'm pretty sure that "strike me down and I shall become more powerful" is the dialogue of the Dark Jedi Master, not Minch.

Zenwolf wrote:This is nice, but I'm pretty sure that "strike me down and I shall become more powerful" is the dialogue of the Dark Jedi Master, not Minch.

Now that you mention it, yeh I might agree, I’ll edit that but later, we’ll spotted