In no particular order

The main thing that always bothered me about the official standing is how easily Sidious dispatched the B-Team. I don’t really have a problem with Mace beating Sidious but Sidious dispatching the trio like fodder insinuates Mace could do the same which is just messed up.

In my perfect world the top 6 as of RotS Yoda, Sidious, Mace, Anakin, Dooku, and Kenobi would only be a little bit apart as duelists with any match up  being a good competitive fight. No ragdoll tier gaps.  Sidious wouldn’t be able to kill the B-Team
without deception; maybe catch them off guard with lightning or something.

He can’t blitz B-team without deception anyway—movie he uses a confusion haze, book he baits Tiin and Kolar into dropping their guards

CuckedCurry wrote:He can’t blitz B-team without deception anyway—movie he uses a confusion haze, book he baits Tiin and Kolar into dropping their guards

@CuckedCurry Evidence that this was in the case in the movie depiction? Or did Kolar and Tinn use the incredible power of standing still with your lightsaber ignited and do nothing?

I can’t remember if it’s in fightsaber or another source, but it clarifies the context of that battle 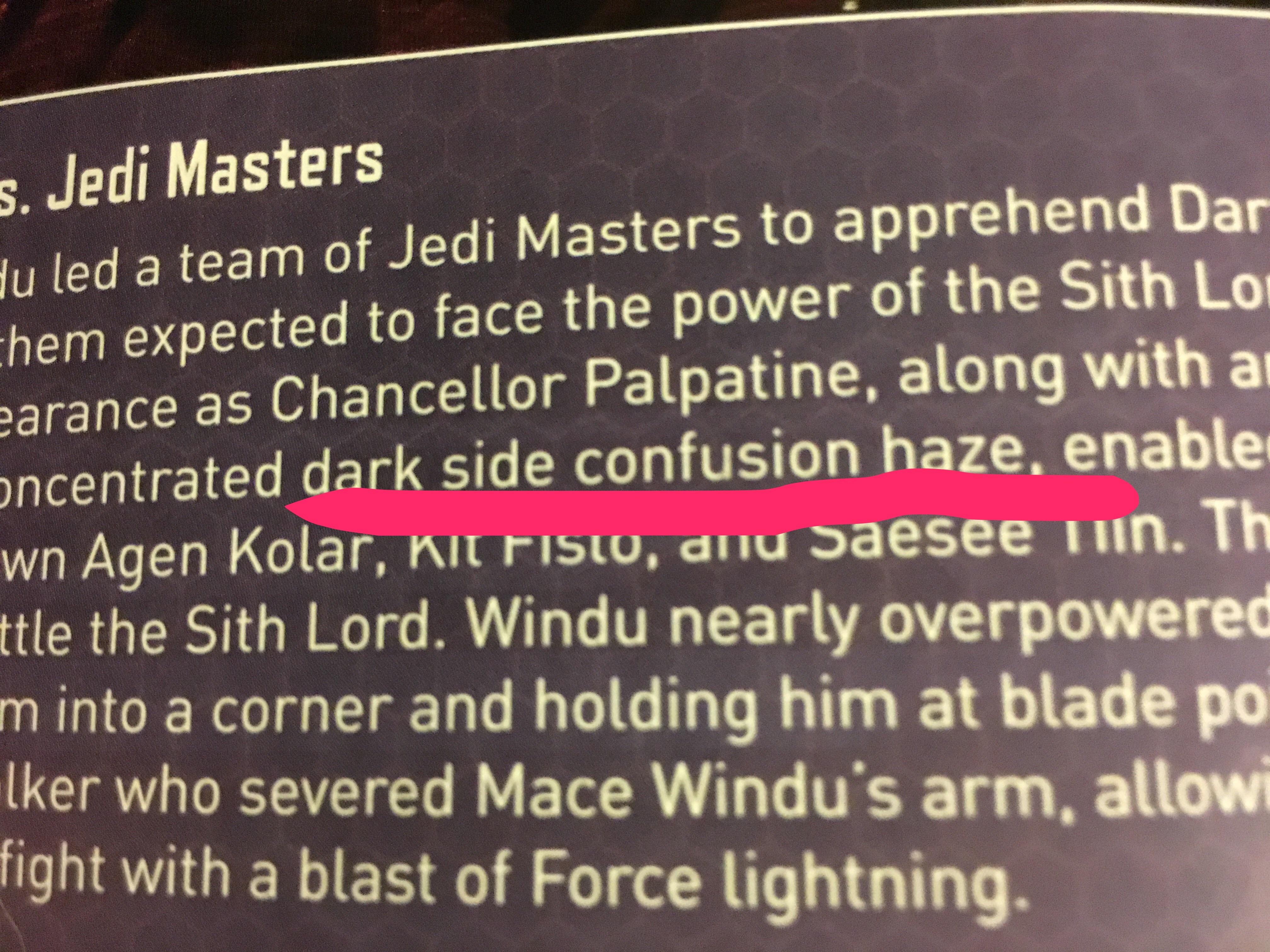 I think Sheev is massivy above the B-Team, but they definitely should have put up a better fight. Tiin especially should have performed just as well against Sheev as Fisto did.

Well, Fisto performed as well as he did because the haze seemingly wore off him somewhat by the time Sheev turned to fight him. We know through other secondary sources that Mace failed to adequately react to Sidious, which can be inferred to be as a direct result of the confusion haze. In a straight up conventional fight with no haxx, Sidious logically would have had to dig considerably more so into the dark side to kill the 3 Jedi as well as hold off Mace. With that being said, none of the B-team have enough power to properly resist Palpatine’s sheer offensive power, so if Sheev just stood at his desk and blasted them with his lightning, for example, the B-team would die regardless

In short, I don’t believe Palpatine can blitz all three of them without haxx

The confusion haze is still a part of Palpatine's own power. What he essentially accomplished is TP'ing three Jedi Masters in combat to allow him to kill them on the spot. It's a remarkable feat whichever way you spin it.
_________________

CuckedCurry wrote:Well, Fisto performed as well as he did because the haze seemingly wore off him somewhat by the time Sheev turned to fight him. We know through other secondary sources that Mace failed to adequately react to Sidious

The film, the junior novel, the script, and the senior novel all have mace "adequately reacting" to sidious. The starwars.com quote is not meant to be taken literally lmao. And if you really want to take it that way then it's rendered non canon by the source material which clearly shows Mace reacing to Sidious's first attack.

The film and script have him reacting to Palpatine not being at his desk, the novel has him reacting to Tiin and Kolar’s desk—can’t speak for the junior novel, but junior novels are pretty gay anyway, regardless of that equal canonicity to adult novel horseshite. Try again mouse

Is the confusion haze Legends though? I thought it was Disney canon.