"To be Jedi is to face the truth, and choose. Give off light, or darkness, Padawan. Be a candle, or the night, Padawan: but choose!"


"The dark is generous and it is patient and it always wins – but in the heart of its strength lies its weakness: one lone candle is enough to hold it back. Love is more than a candle. Love can ignite the stars.”


“The future is not a river to carry us. It is the ocean in which we drown, if we are not prepared.”

"It is such a quiet thing, to fall. But far more terrible is to admit it."


"Direct action is not always the best way. It is a far greater victory to make another see through your eyes than to close theirs forever."

"oh i dont think so" comes to mind lol actually, so many kenobi ones come to mind.. hmmm..

"i only killed two of them. do not make me reconsider my generosity"

The quote I posted was what the dark-sided Bounty Hunter (and probably Agent) can say to one of Fa'athra's foremen in the Industrial Raiders quest when he says if the elderly couple the BH works for keeps stealing his boss' energy, he'll have his family executed.

It's the option in response to when he says he doesn't know what he's going to do because he has no credits saved up with which to get offworld that says "Die." What's disappointing is that, despite all the people claiming to be dark-sided in their playthroughs on YouTube, in truth, they're stupid, weak, and soft-hearted, because not one of them chose that dialogue option.

Cosinga Palpatine: If the Force birthed you, then I curse it. I curse it!
Darth Sidious: As I do.
– Darth Plagueis

Darth Sidious: Yes. Kill him! He was weak, broken!
– The Force Unleashed

Dark Apprentice: I feel... nothing.
Darth Vader: Nothing?
Dark Apprentice: Hate for his weaknesses, disgust for his failings, and pride for rising above them.
– The Force Unleashed II

Jolee Bindo wrote:Love causes pain, certainly. Inevitably love is going to lead to as much sorrow and regret as it does joy.

Jolee Bindo wrote:Love doesn't lead to the dark side. Passion can lead to rage and fear, and can be controlled... but passion is not the same thing as love. Controlling your passions while being in love... that's what they should teach you to beware. But love itself will save you... not condemn you.

One long stride put Grievous next to the Neimodian security officer. “Have you located them, or are you about to die?”

Message reputation : 100% (1 vote)
"Did it provide him with powers far greater than even Exar Kun or Freedon Nadd, or was cybernetic enhancement too simple an explanation?"

The Force Unleashed wrote:Out of the cloud of metal fragments leaped a second of the Emperor's Sith assassins, saber-staff upraised. The apprentice met him with a clash of sparks and lightning.
Sith against Sith, they fought backward and forward through the broad, metal-lined space. This assassin was more proficient than the first, wiry and strong with a good reach and penchant for telekinetically throwing items from inside the apprentice's blind spot.

Message reputation : 100% (6 votes)
You grab your sabers and attack, but Vader is too powerful. He tosses you away like a rag doll.

Jake wrote:You grab your sabers and attack, but Vader is too powerful. He tosses you away like a rag doll.

thank u for that jake. very nice

The Force Unleashed wrote:He raised his left hand and with the power of the dark side unleashed a bolt of Sith lightning at the renegade Jedi.
Kota only laughed. Raising his left hand in a move that was a mirror image of the apprentice's own, he sent the lightning arcing back to its source. The energy struck both of them, hurling them apart.

The Force Unleashed wrote:This time he pushed telekinetically as he came, attempting to knock Kota's feet out from under him before bringing his blade to bear.
Again, however, Kota deflected his Force energies back at him. Again they were pushed apart.

The Force Unleashed wrote:Before anyone else could react, Kota whisked the lightsaber from Starkiller's belt and launched himself at the Dark Lord. Vader raised a hand and caught the general telekinetically about the throat. Kota dropped the lightsaber and desperately clutched at the invisible fingers choking him, but the pressure only increased. When his resistance was crushed, Vader threw him bodily toward the stormtroopers and turned his attention elsewhere.

The Force Unleashed wrote:This time he pushed telekinetically as he came, attempting to knock Kota's feet out from under him before bringing his blade to bear.

The Force Unleashed wrote:This time he pushed telekinetically as he came, attempting to knock Kota's feet out from under him before bringing his blade to bear. 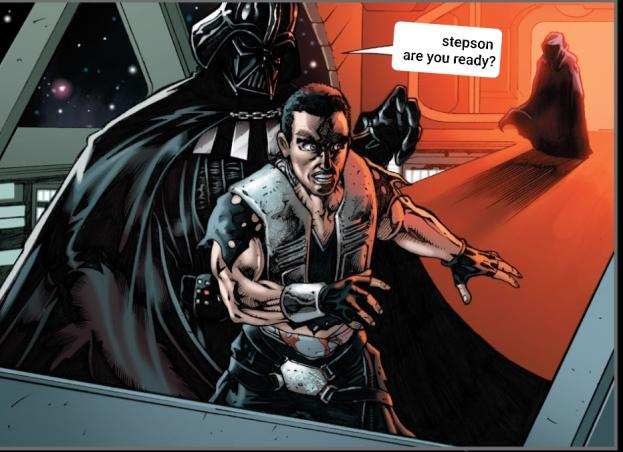 I love this thread.

"The activation light on the thermal detonator began to blink, and that was enough to shatter Jacen's concentration."

Yoda: Dark Randevous wrote:A player of dejarik could memorize all the classic openings and countermoves, and still not be a master of the game. Defeat often came at the hands of less experienced players who knew nothing about the traditional strategies. A professional fighter, a combat artist, could be defeated by a cantina brawler who knew nothing about form but everything about ending a conflict quickly, without a thought to winning gracefully or elegantly.

New Jedi Order: Destiny's Way wrote:"Am I the only one who simply wants to punch Master Skywalker in the nose?"