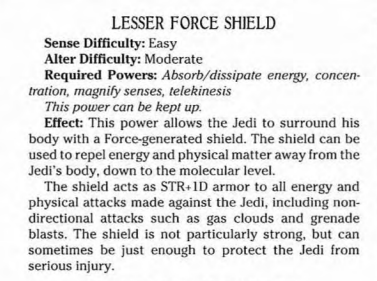 Greater Force shields are what Force users throw up to defend against Force attacks. Obviously, if the defensive energy is greater than the attacking energy, than the attack will be resisted. That's both self-evident and reflected in sourcebook stats. Likewise, if the defensive energy is inferior to the attacking energy, then the greater Force shield will negate as much as it yields, and the rest will be what actually influences the individual. Everything else equal, I don't see why shattering a greater Force shield wouldn't be evidence or proof superiority, given it's a direct pitting of one's active energy against the other's.

Darth Bane - Rule of Two wrote:
Bane hit her with a powerful Force throw, sending her hurtling backward. Only the barrier she had instinctively thrown up at the last second to shield herself saved her bones from being shattered by the concussive force of the impact.

Instinctual Force shields are only ever mentioned by Drew Karpyshyn. I figure that they should be perceived as stronger than lesser Force shields but weaker than greater Force shields, given the fact it was instinctively put up suggests that it wouldn't reflect the power of something manually put up.

Darth Bane - Rule of Two wrote:
Farfalla released the power he'd been gathering in a single concentrated burst. Bane was suddenly encased in a shimmering stasis field of light-side energy, freezing him where he stood. But his command of the dark side was too powerful for it to hold him for more than a split second. The shimmering field exploded into fragments as the Dark Lord broke free, though the momentary delay had allowed the Echani to place herself between the Ithorian and the Sith.

Once an individual is sundered in the Force energy of another, it doesn't seem possible to throw up a greater Force shield. Instead, based on Darth Bane breaking free from Valenthyne Farfalla's Force stasis, the coalition strike team breaking free from Revan's Force destruction with spirit Revan's additional power (click), and Darth Caedus' inability to break free from Luke Skywalker's telekinetic pinning, the primary way to escape would be to unleash the energy contained within one's body outward to shatter the energy incapacitating oneself. Consequently, the longer a Force user dominates another, the more indicative of superiority it is, assuming that the captured Force user is spending that duration attempting to summon the necessary energy to break free. Likewise, it's noteworthy that telekinetically dominating a Force user for a short period does not necessarily mean superiority, given the dominant Force user may have just shattered the opponent's lesser Force barrier and quickly throttled them around before the opponent had the chance to rebuke. A good example of this may be Kyp Durron against Kenth Hammer.

Find myself agreeing with this.

Again Ant takes sides against his people. No I am not trolling. My Brigade that Dooku did not legitimately ragdoll Kenobi is more ratified by the day and now with the co leader of the dooku brigade admitting it, I say only one thing to the Dooku wankers...

"my powers have doubled since last we met Count."

Find myself agreeing with this.

In-sidiousvader wrote:Again Ant takes sides against his people. No I am not trolling. My Brigade that Dooku did not legitimately ragdoll Kenobi is more ratified by the day and now with the co leader of the dooku brigade admitting it, I say only one thing to the Dooku wankers...

"my powers have doubled since last we met Count."

I agree, it is stated multiple times that Kenobi was taken off guard. Furthermore, it would make no sense, given that Kenobi at the end of ROTS can deflect telekinetic blasts from Anakin.
OT- great blog

I still say the issue of Force barriers is dependent on the author. It's a very messy subject. In the Bane Trilogy it's clear Force users can activate their Force shields at a moments notice even if they were taken completely off guard such as with Bane and Qordis(which would mean Sidious has no excuse when Yoda Force blasted him across the room of we apply these mechanics).

However I think it's clear that going by movie mechanics the only way to stop a Force attack is to physically set up an active guard stance. Which is why Dooku can floor Kenobi in RotS but can't in TCW. Meaning Force pushing someone is no different than landing martial strike on your foe.

Would be a good idea to post the sources relating to this too, like how it is very difficult to dominate the greater shield of another combatant etc.

@LOTL: I've developed ten metric tons of more theory to this. It's one of the things I'm most passionate about. I want to expand on it sometime soon.

Try relating something like this to physical damage, i.e. when a force user is tk'ed without barrier and has broken bones, or physical damage etc. then it may be an indication of superiority.

Wanna see an updated version of this.