Message reputation : 100% (4 votes)
Respect Darth Andeddu
This is the largest collection of Andeddu’s feats and accolades. Be sure to read through it thoroughly and keep in mind that this is a tool because:

“Knowledge is power and true Sith do not share power.”
-Darth Andeddu 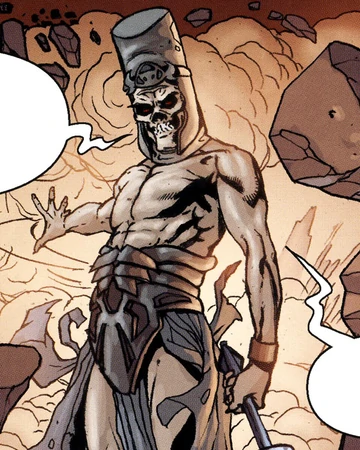 Respect the Immortal King of Prakith.

Andeddu’s essence put up a fight to Darth Bane, but was ultimately defeated:

However, it was possible to circumvent the gatekeeper: but only by one strong enough to survive the attempt. If Bane's will faltered, or if the power of Andeddu's Holocron was more than he could handle, then his mind would be destroyed. His identity would be devoured by the talisman, leaving his body a mindless husk. It was a desperate gamble, but there was no other way to get what he needed. Not in time to help him against Zannah. "If you will not give me what I want," he shouted at the gatekeeper, "then I will take it!" Reaching out with the Force, he plunged his awareness into the depths of the pyramid's inner workings as the gatekeeper let loose a howl of impotent rage. Thrusting his consciousness directly into the capstone, Bane let his will invade the small four-sided talisman just as he himself had invaded the stronghold of Andeddu's cult back on Prakith. For a brief instant he could feel the burning inferno of power trapped within threatening to consume his identity. Bane welcomed the pain, feeding on it and transforming it along with all the frustration and anger he had built up over the past four days into a raging, swirling storm of dark side energy. Then, bit by bit, he began to impose order on the chaos, bending it to his will. Using the Force, Bane began to make subtle adjustments to the Holocron's crystal matrix. He began to manipulate the arrangement of the filaments, twisting, turning, and shifting them with subtle, immeasurable adjustments as he worked his way deeper and deeper into the data in pursuit of what he sought. In many ways it was like slicing a secure computer network, only a million times more complex. With each adjustment, the gatekeeper's image flickered and cried out, but Bane was oblivious to the simulation's artificial suffering. For several hours he continued his work, his body perspiring heavily, until he finally found what he sought: the ritual of essence transference; Andeddu's secret of eternal life. With one final push of the Force, he reached out with his mind and seized what he had been searching for. With the aid of the gatekeeper the information would have taken weeks to absorb and learn. Bane, however, had gone right to the source. The knowledge streamed directly from the Holocron into his mind, raw and unfiltered. Thousands of images flooded his consciousness, an explosion of sights, sounds, and thoughts that caused him to drop the Holocron to the floor, breaking the connection. The gatekeeper's image vanished, leaving Bane alone in the ship, still sitting cross-legged on the floor. He was slumped forward, his breath coming in heavy gasps. His clothes were soaked in sweat; his body shivered with exhaustion.
-Darth Bane (III): Dynasty of Evil

Darth Andeddu fought well against (but was ultimately killed by) Darth Wyyrlok III: 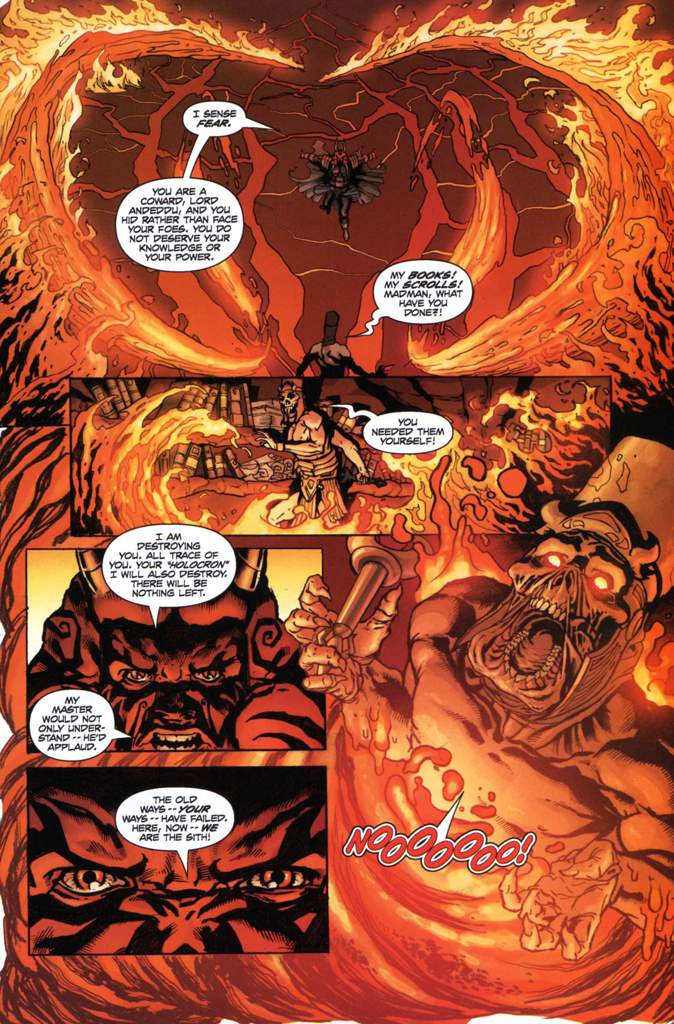 Murals suggest that Andeddu went head-to-head with armies, but this could have been overexaggerated:

The walls were covered with murals depicting images of the God-King unleashing his power against the armies of those who opposed him, and a great stone sarcophagus lay in the center, its lid carved with a relief of the long-dead Sith Lord.
Darth bane (III): Dynasty of Evil

Darth Andeddu was betrayed and brutally murdered by his own followers:

In the typical fashion of the Sith before Bane's reformations, Andeddu's reign came to a violent end when he was betrayed and overthrown by his own followers.
Darth Bane (III): Dynasty of Evil

Many of Darth Andeddu's achievements and works were built upon the powerful Sith Lord Karness Muur's experiments: 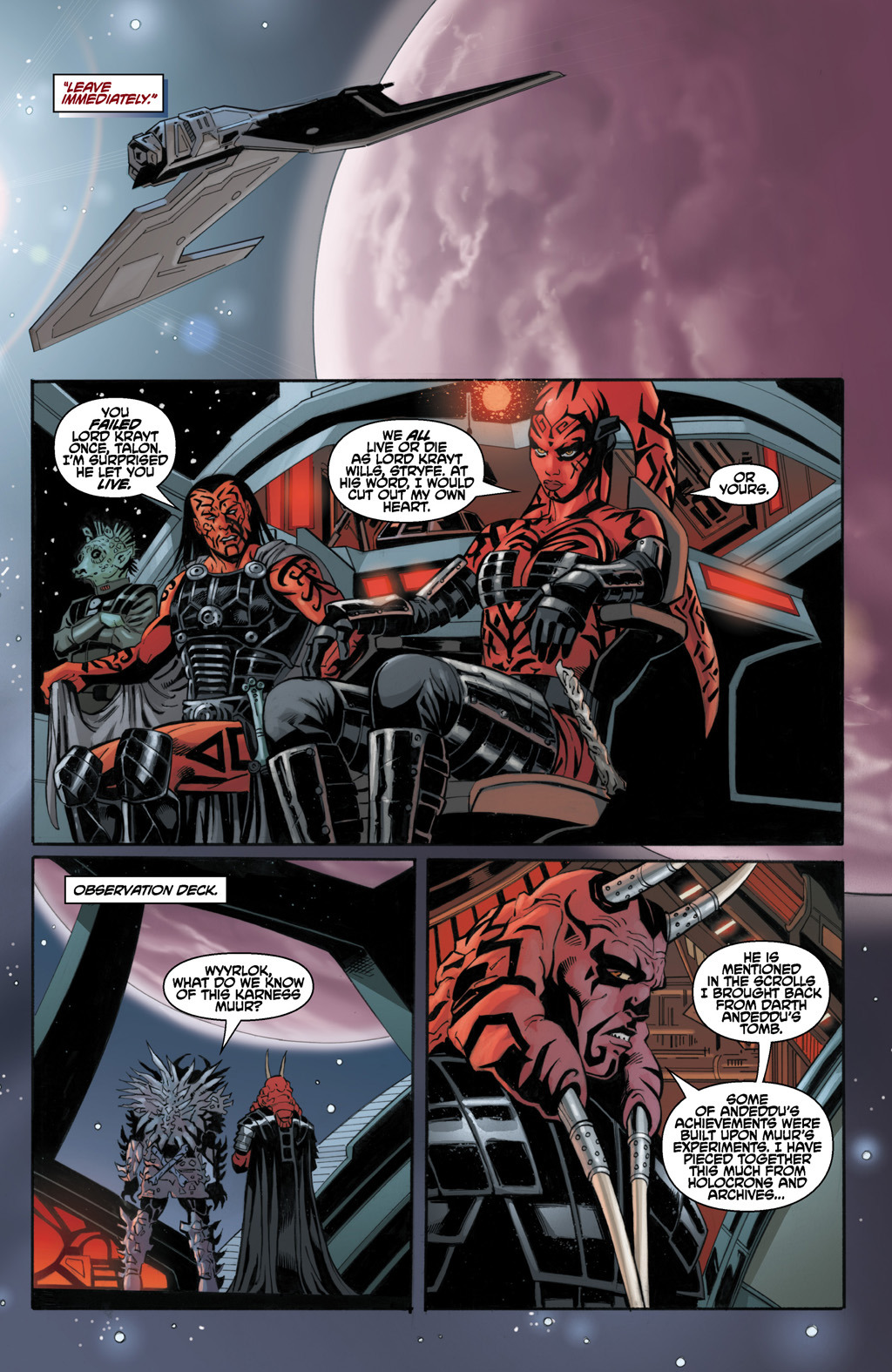 Darth Bane considered it a possibility that Andeddu's disciples were capable of overwhelming him if they were united:

The remaining enemies were potentially more dangerous: the priests of Andeddu had no doubt ascended to their positions because of their affinity for the Force. Their training was probably limited, and Bane knew no single one among them was powerful enough to stop him. Together, though, they might have the potential to overwhelm him. However, he didn't intend to give them time to organize so they could attempt to unite their strength.
-Darth Bane (III): Dynasty of Evil

Darth Andeddu had many devoted followers before and after his death. This group survived for thousands of years: 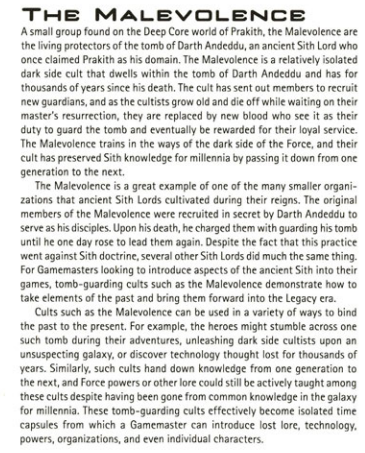 Darth Bane considered Andeddu to be worthy of the "Darth" title. This is directly after he described its powerful meaning:

-The Book of the Sith

Though, ultimately, Bane considered himself to be superior to Darth Bane:

He had learned nothing new about the Force, though the gatekeeper's words had revealed much about Darth Andeddu's personality and beliefs.

Like many of the ancient Sith, he was cruel, arrogant, self-centered, and shortsighted. His lessons mirrored those of Bane's instructors at the Sith Academy on Korriban; lessons Bane had rejected decades ago as flawed. He had moved beyond their teachings. His understanding of the dark side had evolved. In creating the Rule of Two, he had ushered in a new era for the Sith. He had transcended the limited understanding of men like Andeddu, and he was done listening to the gatekeeper's ignorant litany.
-Darth Bane (III): Dynasty of Evil

A grand temple was constructed to glorify Andeddu:

To commemorate the momentous event, the proclamation continued, a great temple would be built in his honor.
-Darth Bane (III): Dynasty of Evil

Darth Andeddu was worshipped as a god and was deemed as the king of Prakith:

The scroll was a religious proclamation declaring Darth Andeddu the Immortal and Eternal King over the entire world of Prakith.
-Darth Bane (III): Dynasty of Evil

Quinlan Vos felt nauseous when he was near Darth Andeddu's holocron.

Darth Tyranus held the knowledge of Andeddu in high regards: 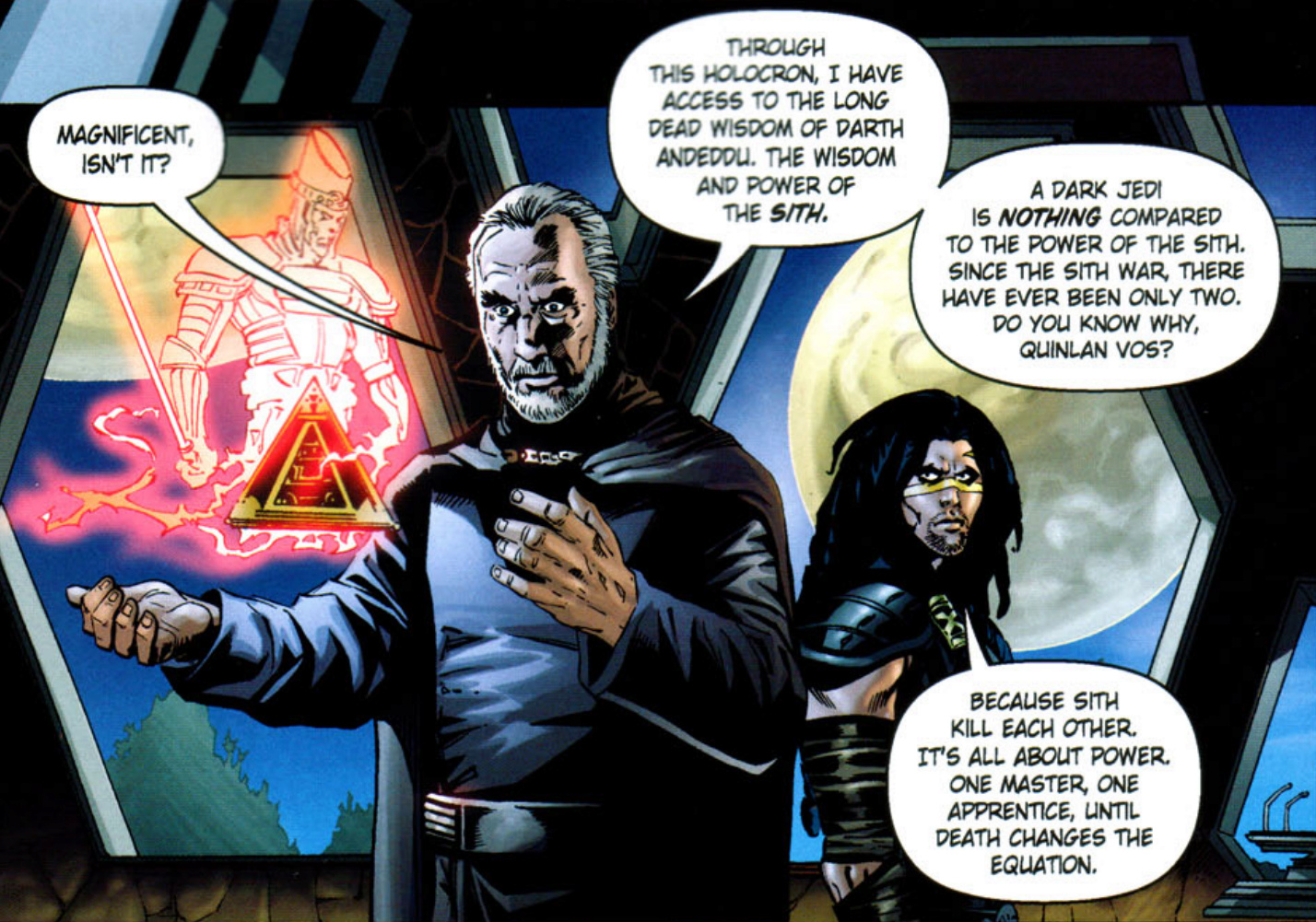 -Republic 63: Striking from the Shadows

The tomb of Darth Andeddu gave Prakith’s surface a dreadful and gloomy feeling:

Only recently surveyed by the Empire, Prakith has a much longer
history than its Imperial residents are aware of. Prakith was touched by the dark side centuries ago, when it became home to the tomb of Darth Andeddu. That fact is unknown in Imperial times, and the tomb is not discovered until the Legacy era, but its foul presence is enough to give this world of cracked and ruined surfaces a feeling of genuine dread and gloom.
-Sword of the Empire

Andeddu's Holocron was a talisman of undeniable power; Bane could feel the waves of dark side energy radiating from it.
-Darth Bane (III): Dynasty of Evil

Darth Wyyrlok states that certain achievements of Andeddu were built off of Murr’s previous experiments: 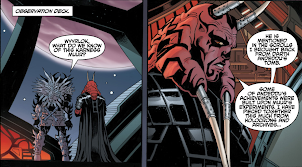 Andeddu was said to be a powerful Sith Lord consumed with the hunt for immortality.
-Force and Destiny - Core Rulebook

Darth Andeddu gained knowledge of the force over a span of hundreds of years:

However, there was a small section that made a brief reference to a man named Darth Andeddu. Andeddu, the account claimed, had lived for centuries, using the dark side of the Force to extend his life and maintain his body well beyond its natural span.
-Dynasty of Evil

Andeddu's Holocron offered the promise of immortality; with it he could live long enough to find and train a new successor.
-Darth Bane (III): Dynasty of Evil

Darth Bane had referred to sorcery as one of the purest
expressions of the dark side of the Force, and yet he hadn’t
been able to harness those energies with near the skill as
had his onetime apprentice Zannah. Bane’s disciples,
however, believed that he had experimented with a
technique of even greater significance: that of essence
transfer, which he had learned after acquiring and
plundering the holocron of Darth Andeddu, and which
involved the relocation of an individual’s consciousness into
another body or, in some cases, a talisman, temple, or
sarcophagus.
-Darth Plagueis

Andeddu transferred his essence into what was previously thought of to be a simple holocron and then back into his dead body: 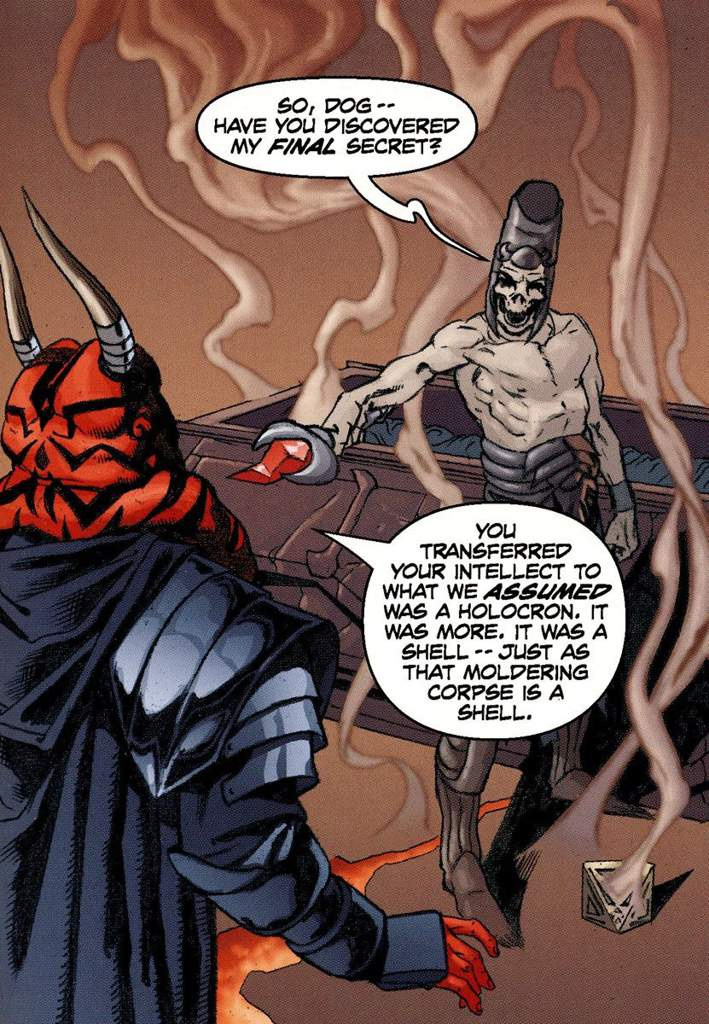 Andeddu's knowledge was his now; over the past few days his brain had processed the raw information he had stolen to the point of full comprehension.
-Darth Bane (III): Dynasty of Evil

Andeddu stated that it takes years to master the technique of Essence Transfer:

"It will take years for you to learn the lessons I must teach you," the gatekeeper warned him, its skeletal features serious and grim.
-Darth Bane (III): Dynasty of Evil 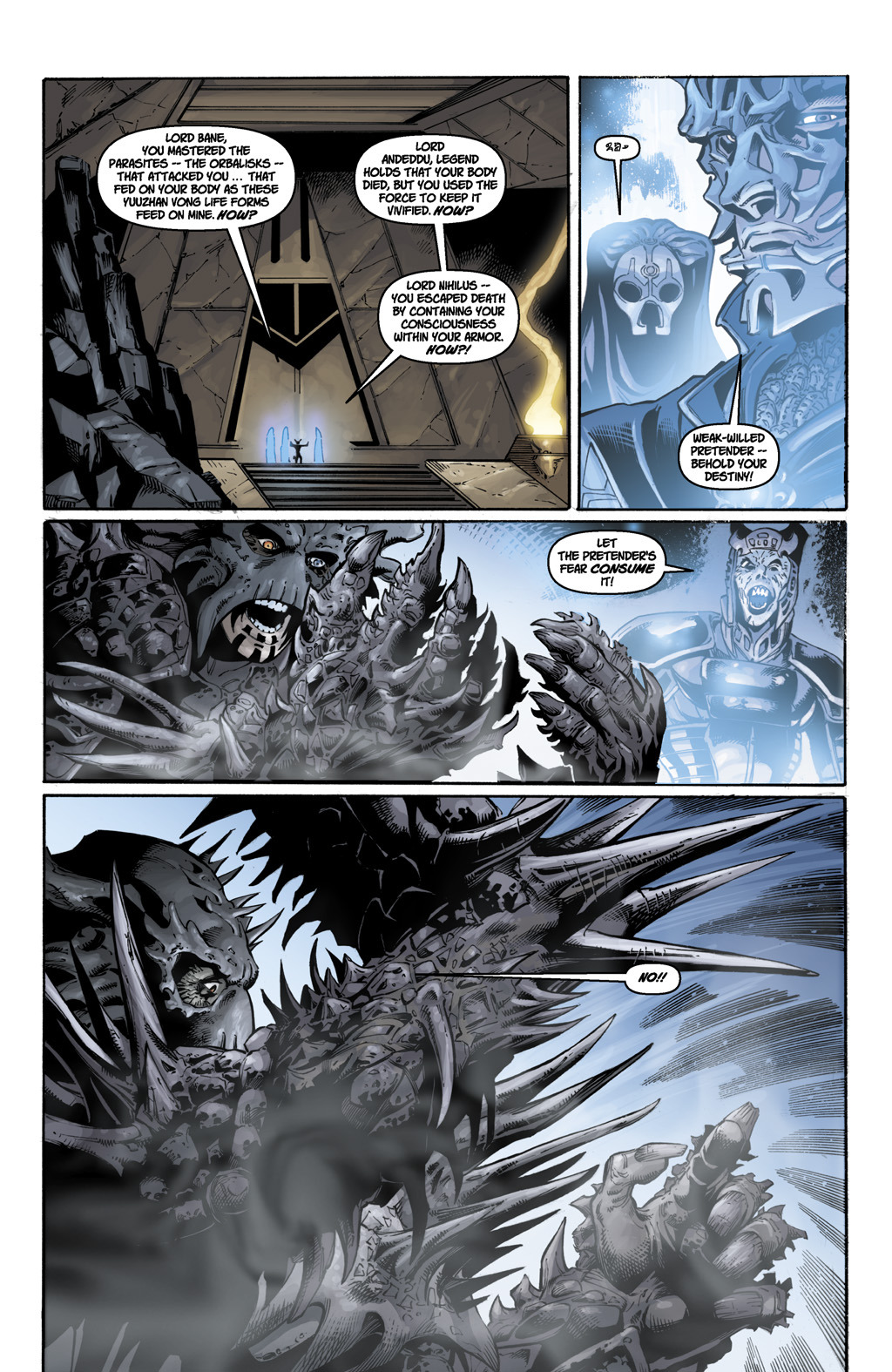 Darth Andeddu might have been somewhat responsible for the illusion that was cast upon Darth Krayt: 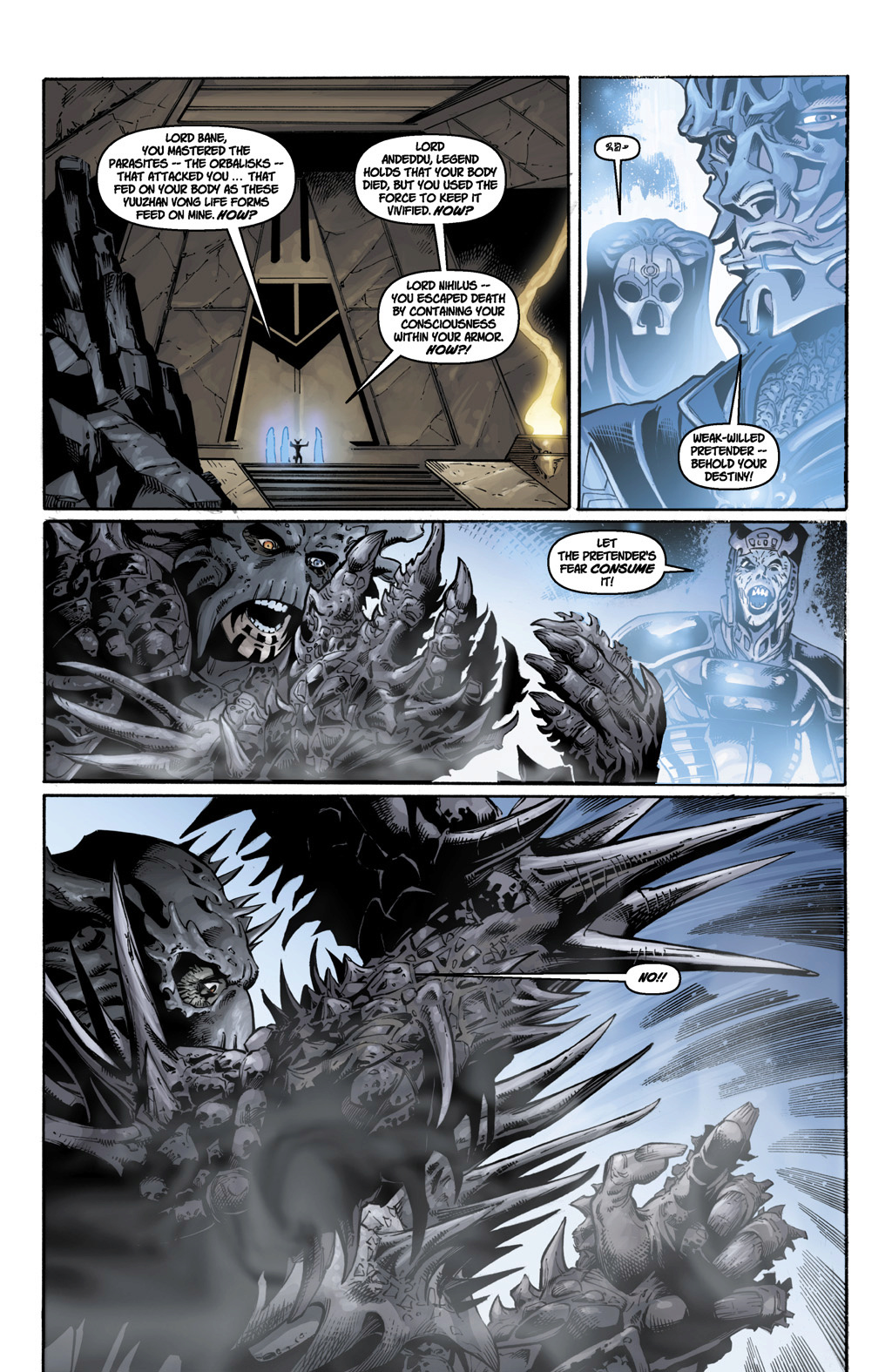 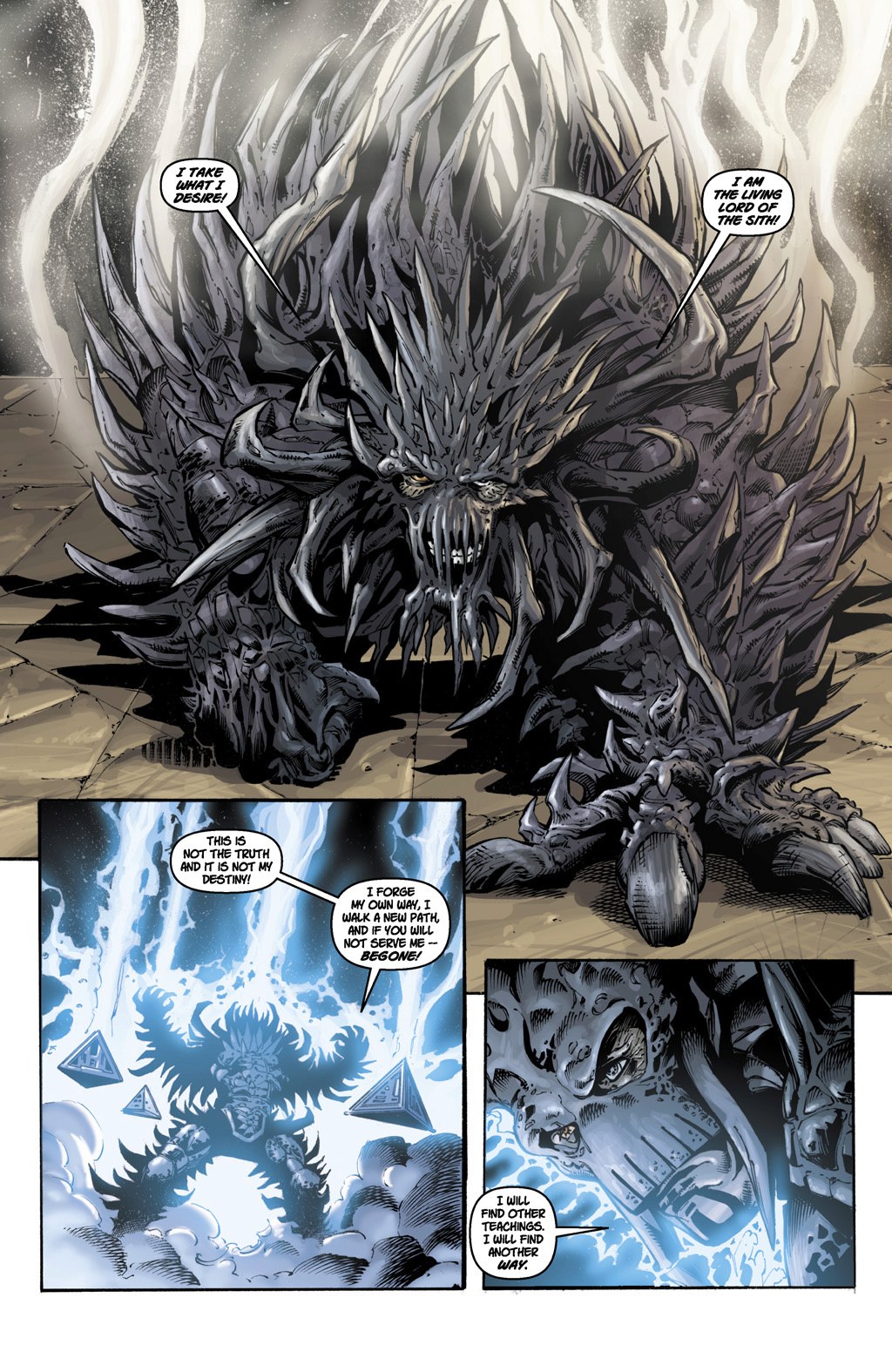 Andeddu blows up the back wall of the room and uses the shattered rock as projectiles: 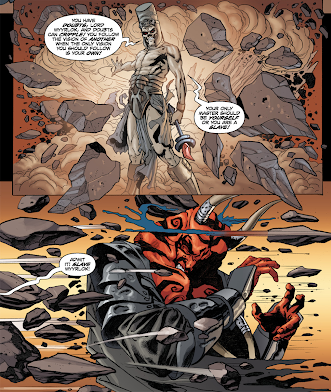 These attacks do injure Wyyrlok as he is seen bleeding in the scan after:

Andeddu might be somewhat responsible for the setting’s volcanic-like appearance: 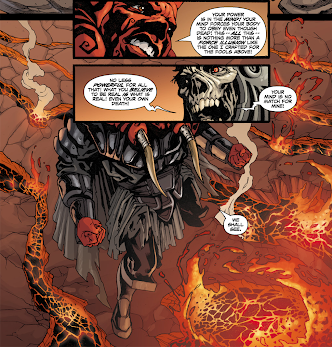 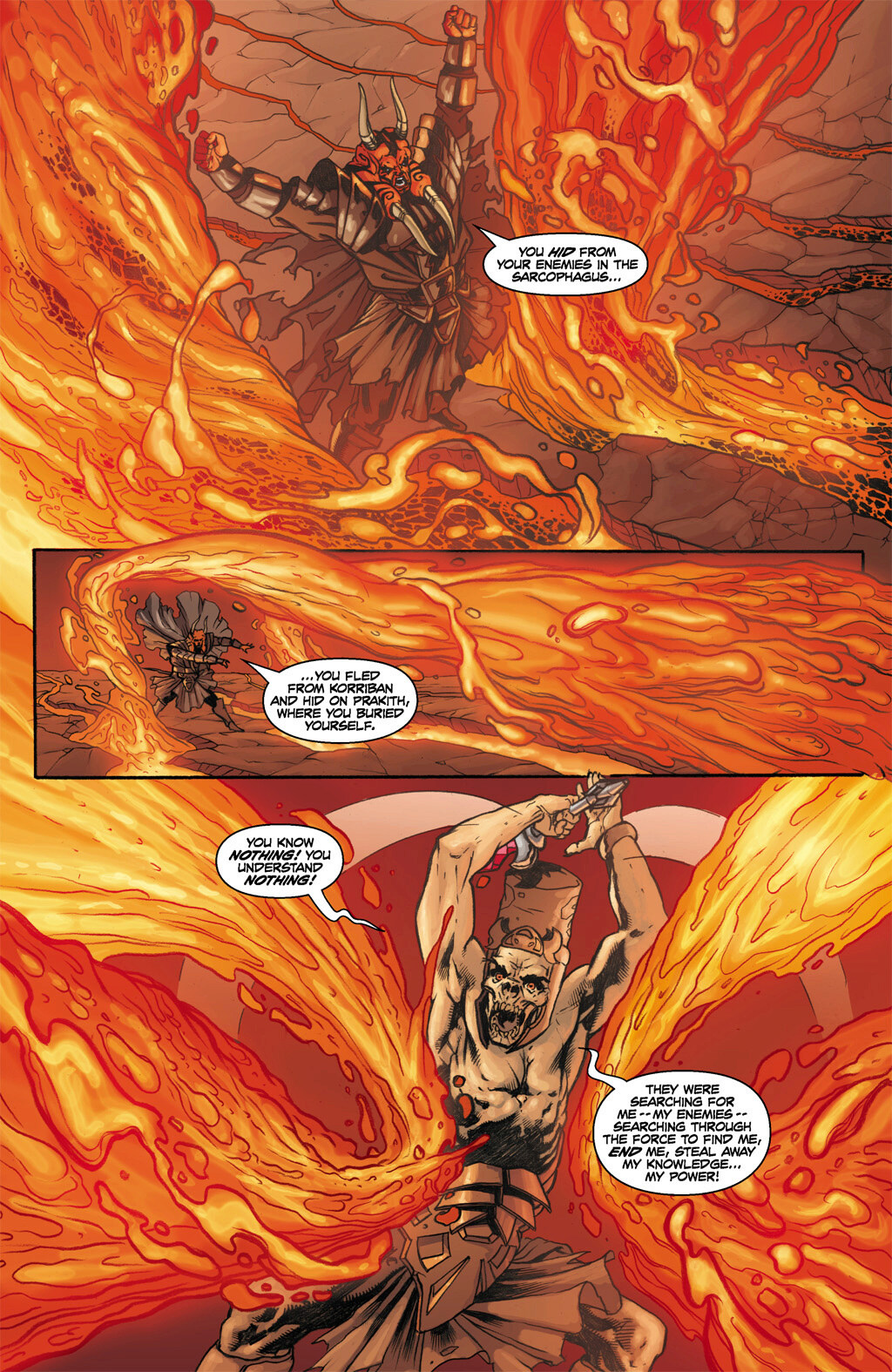 Andeddu's Holocron offered the promise of immortality; with it he could live long enough to find and train a new successor.
-Darth Bane (III): Dynasty of Evil

Andeddu was able to make his already dead body fully functional after inserting his essence into it. This knowledge is only held by Andeddu himself (at the time of Legacy at least). 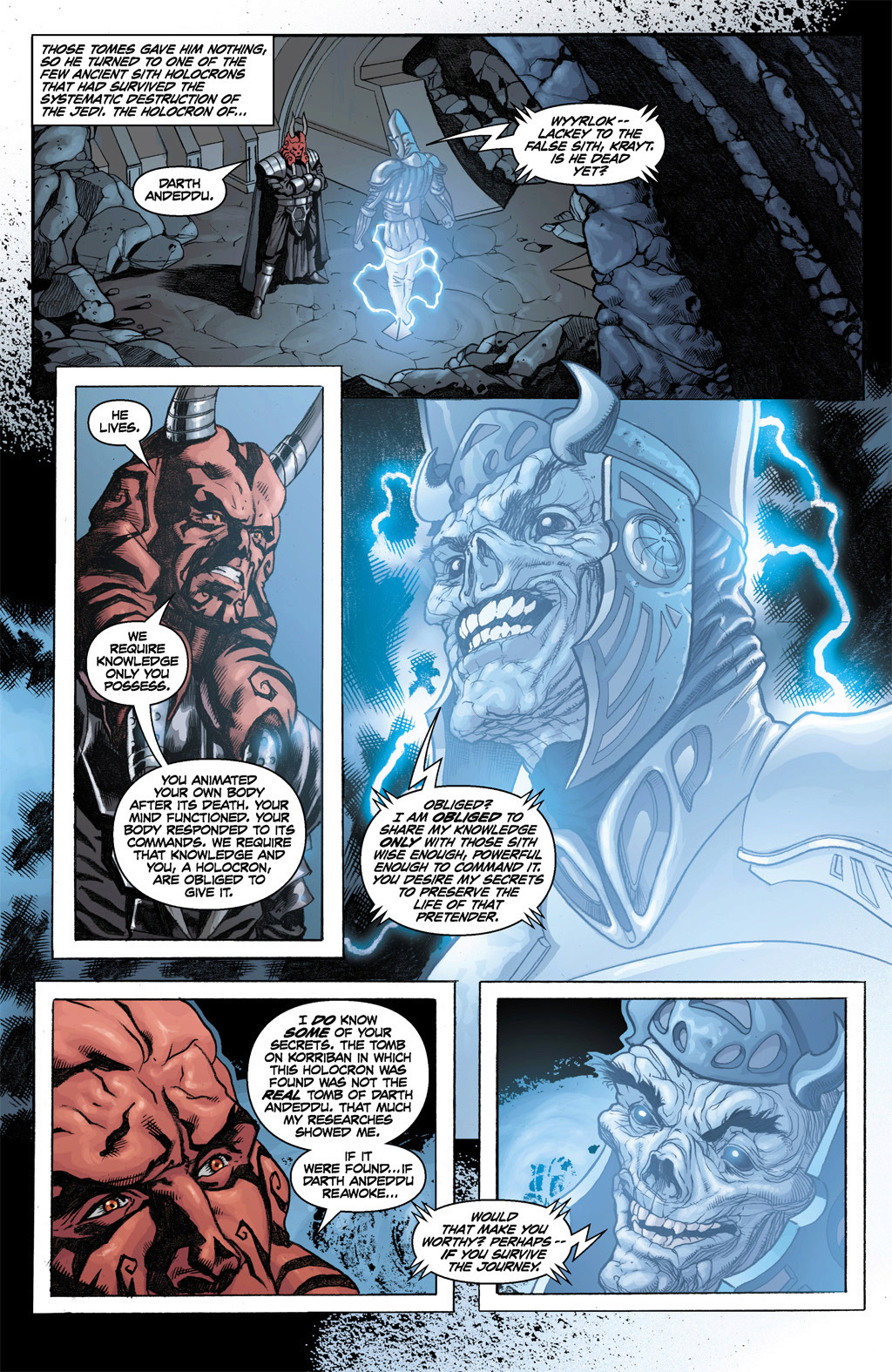 Andeddu utilized his healing abilities to live beyond the lifespan of an average human:

However, there was a small section that made a brief reference to a man named Darth Andeddu. Andeddu, the account claimed, had lived for centuries, using the dark side of the Force to extend his life and maintain his body well beyond its natural span.
-Dynasty of Evil 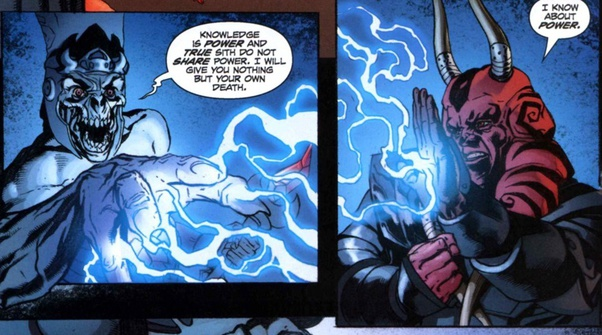 Andeddu drains the life of one of his disciples: 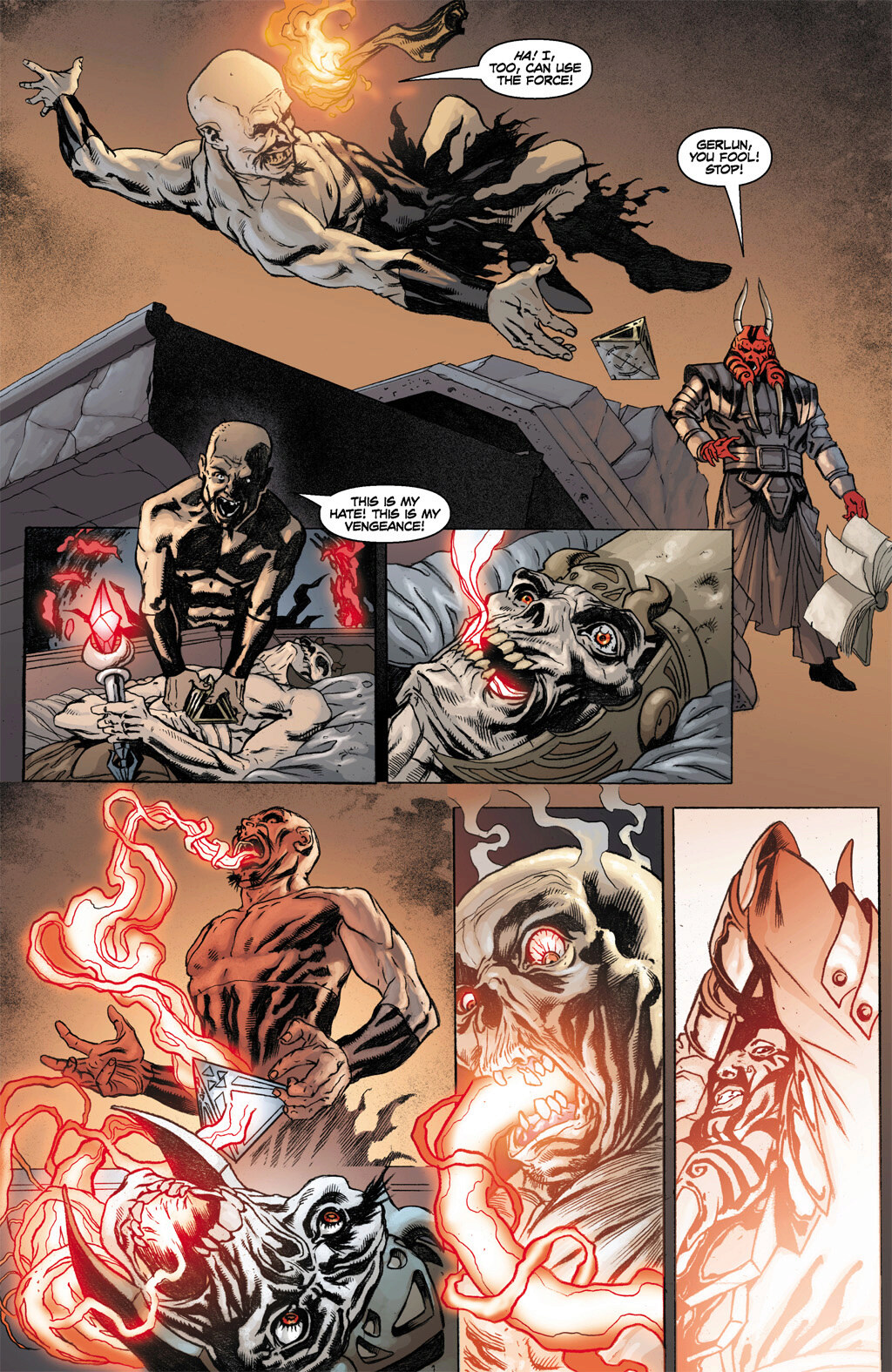 Prakith Nexus
Andeddu's stronghold was a focus of negative energy: 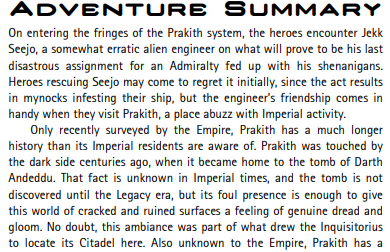 This is my first respect thread, so assume that mistakes are littered over this RT.

I would really appreciate any tips regarding format, quality, and any other sources you guys might have that I should add (credit will be given) would be super appreciated.

This RT will likely change due to reasons for correction and Supernatural Encounters' release.

I saw that the SW Community lacked one of these, so I was quick to correct this issue.

Thank you, and I hope that you all enjoy the first official Darth Andeddu Respect Thread.