Im looking for some help with feats/ accolades for Rey, as my access to any and all of them is relatively NIL. What feats does Rey possess as of the end of TROS that help scale her in the mythos?

Rey is unfortunately sorely lacking in feats at the moment, and I also don't have access to many of her accolades at the moment. She held her own well enough against Kylo Ren twice in TRoS, and Kylo Ren himself has a few respectable feats. And she didn't do too poorly against the Praetorian Guards in TLJ. She also made very short work of Palpatine's six Sovereign Protectors in TRoS by redirecting their blaster shots back at them with her lightsaber and TK. This is somewhat impressive, given what we know about how Palpatine selects his personal guards.

All that said, she doesn't really have many feats between TLJ and TRoS that I'm aware of, and nothing that really helps us scale her to other eras. All we can really do is try to scale her off of Kylo Ren.

As for Kylo Ren's feats, most of them come from the Rise of Kylo Ren miniseries. He holds his own against two Jedi at once in a duel, while a third tries to use TP to calm him. However, Ben doesn't win unscathed during that encounter. By the end of the battle against Voe and Hennix, his garb is pretty tattered, and he's got a few bruises and scrapes that are visible, so his victory wasn't a stomp. Ben later goes on to pretty decisively defeat Tai in the final issue of The Rise of Kylo Ren, immediately followed by an intense duel between Ben and Ren (not Kylo Ren, but the original leader of the Knights of Ren). Ren is the most powerful of the Knights of Ren, each of whom is supposedly perfect stock to be an Inquisitor. It probably wouldn't be unreasonable to say Ren is around the same level as the Grand Inquisitor, and Ben pretty solidly defeated him. Kylo Ren has also surpassed one of Vader's battlefield feats by killing a Zillo Beast, in the Age of Resistance: Kylo Ren issue. So Rey's parity with Kylo Ren gives her a pretty good standing in the Disney Canon.

Right now, I have TRoS Rey in roughly the same regard as RotJ Luke. On paper, we know they're supposed to be among the best of the best in the mythos. But they just don't have all that many feats backing them up, and the best way to place them is to instead compare them with someone they hold rough parity with who actually does have a lot of good feats.

The TLJ novelization notes that when Rey and Kylo connected in TFA, she inextricably gained much of the knowledge and experience he had at the time(#DyadPower):

Even as Kylo Ren callously rifled through her mind, he had somehow revealed his own. Rey found herself in his mind even as he invaded hers. She felt his rage, like a ruinous storm that filled his head, and his hatred, and his lust to dominate and humiliate those who had wronged him. But she also felt his hurt, and his loneliness. And his fear--that he would never prove as strong as Darth Vader, the ghost who haunted his dreams.

Kylo had retreated at finding Rey in his head--had practically fled from her. But that had not been the end of that strange, sudden connection. She had seen more--far more. Somehow, almost instinctually, she knew how he accessed some of the powers at his command--even though she didn't understand them. It was as if his training had become hers, unlocking and flinging open door after door in her mind.

She then continued building on that know-how via the ancient texts and Luke/Leia's training in the ~1 year between TLJ and RoS.

Azronger wrote:@Underachiever599 Are they really called Sovereign Protectors in Canon too?

Yep. I actually had to look it up just to be sure.

Rey was originally conceptualised as being Starkiller's daughter. 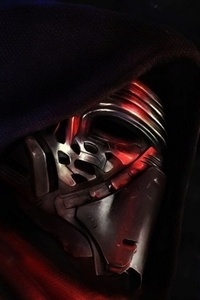 She was holding back and pulling back down that troop transport in TROS so that's actually a very impressive feat, puts her far ahead of Ahsoka by the time of season 7 (although not so unsuprising). On the other hand seems her raw power to be comparable to Kylo although I think that escpecially in TROS he was getting the upperhand.