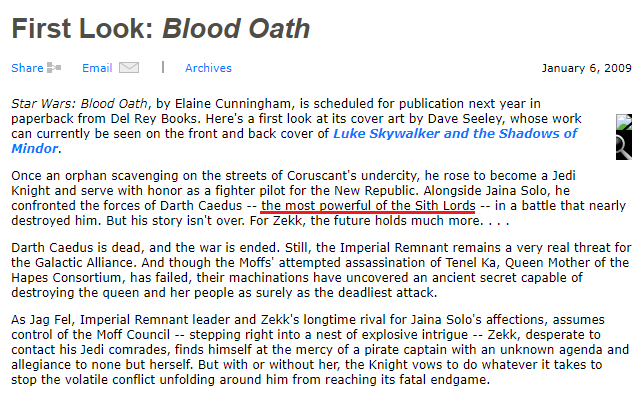 Caedus is "the most powerful of the Sith Lords." Considering SW.com's quote labeling Palpatine as "the most powerful Sith in modern times," which has been extensively analyzed by Azronger and ILS to show it applies to all later Sith, this quote must be specific to the time-frame. This should put Caedus above Darish Vol and Darth Krayt as of 41 ABY--three years before FOTJ. Does this put Caedus' performances against Luke in a new light, or offer much needed clarification to the events of FOTJ?

And Krayt is the best duelist with force abilities outstripping any sith of his era.

By the same logic that is.

News section is not cleared and is non-canon. Just like blurbs, which it appears this is. And the novel this was for.

I mean if we want to change our tune about blurbs now I'm fine with Bane > Valk being a thing.

@HeartoftheForce: That's interesting. I'll retract the claim if you find a quote saying those articles are non-canon? That's the first I've ever heard of that. Otherwise, while this may have been designed for the novel's N-Canon blurb, the quote being posted on the SW.com website automatically makes it C-Canon regardless.

if we take blurbs and supremacy quotes as solid facts then qui gon>plagueis or bane>revan if we followed the logic of that quote.

Oh no dear Grey. You see Ant accepts all blurbs as C-canon and with the same veracity as any other quote, but the ones saying Bane is the most powerful darksider of all time are simply ignored as by Antian logic (the only real logic) only what he deems fit to be verified is truly verified.

While the book was later cancelled, this article should actually canonize the events of the book described. And even if the events described there were retconned to be non-canon elsewhere, refer to Chee’s statement that some wrong material in a source doesn’t make the whole source invalid.

Databank is official. Blog are editorial.

That’s referring to the new SW.com website under Disney. This is the books section of the pre-TCW SW.com website retrieved via Wayback Archive. Completely different websites, sections, and continuities.

From the way it’s written it looks to me like a publisher’s summary, and wookipedia presents it as such. Regardless, the most powerful of the Sith Lords is vague to say the least.

Sale sites have it as a blurb as well

Like I said, it’s designed for a blurb, but it would still then be made C-Canon by being posted onto the site as a description.

Same for how an Infinities event becomes C-Canon if mentioned in an actual source.

Yea, I agree with Ant here. The article being used as a blurb or publisher's summary on other websites doesn't preclude it from being mentioned on SW.com, therefore making the article C-Canon Also, Darth Caedus is the "most powerful of the Sith Lords", I'm not really sure how the wording can be described as "vague" when the wording makes it very clear that he is more powerful than any of the Sith Lords in that time frame. What else would it be referring to that makes the article unclear?

On second thoughts, while I’m not yet sure of the absolute validity of the quote, while Krayt as of 41 ABY would be capped, Vol still has a way out given that the character hadn’t been conceived yet, if one is to buy the argument that OOU quotes are bound by OOU chronology.

The quote is referencing him confronting Caedus's forces, not the man himself. Given this the "power" being referenced likely isn't personal, but militaristic in nature, as Caedus's own personal power has nothing to do with the forces being faced. It's utterly irrelevant information that there's no reason to mention and doesn't fit the context.

Seriously, learn how to read people.

UnquantifiableCharacter77 wrote:The quote is referencing him confronting Caedus's forces, not the man himself. Given this the "power" being referenced likely isn't personal, but militaristic in nature, as Caedus's own personal power has nothing to do with the forces being faced. It's utterly irrelevant information that there's no reason to mention and doesn't fit the context.

Seriously, learn how to read people.

No it isn't, lol. You don't have to contrive explanations to make quotes show sense within the continuity

@LOTL Good to see you're back.

Message reputation : 100% (2 votes)
I'm not aware of why sw.com publishing a blurb in anticipation of a book's release makes the contents of said blurb as authoritative as the databank? Blurbs have a license to be subjective whereas the databank is intended to be a factual source of information... the clue is in the name "databank." 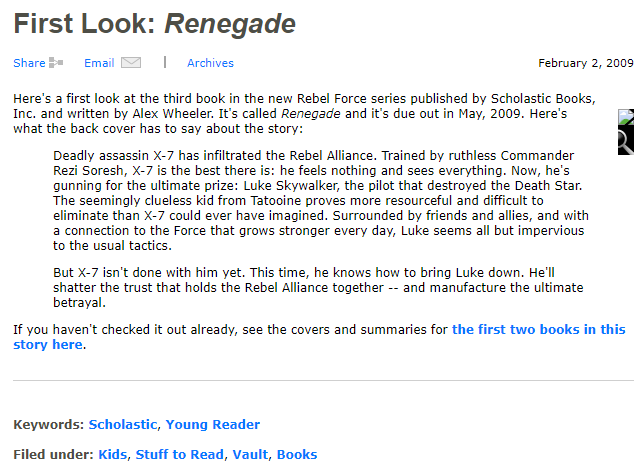 This is a similar "First Look" article. It's filed under several sections of the old site including "Kids," "Stuff To Read," "Vault," and "Books." It even says "Here is what the back cover has to say about the story:"

Essentially any article can be tagged into any section of the old website depending on the relevance of it. The article itself is a press release nonetheless. It is not canonizing specifically the contents of the blurb of a book that has since become n-canon, it was sharing the synopsis of the book anticipating its release.

Anyway, I'm curious: does this mean the TOR brigade have well and truly cucked not only to supremacy quotes, but to dubiously canon publisher summary/blurb supremacy quotes as well? Or will we see yet another 180?

As I initially suspected, the quote is hardly C-Canon, given that Sue Rostoni has confirmed about 8 months after the article came out that the Novel is in no way canon:


`*So is Blood Oath still considered to be canon then? We just won't know the details of it, naturally. *

No, Blood Oath is not canon.

Since Blood Oath has been cancelled, can you tell us what was going to happen in it? *

There's really no point to because what was going to happen in it didn't really happen. Not like any of this really happens... but you know what I mean. You'll still be getting Zekk's story -- it'll just come out in different ways.

To the first reader, she confirms the book non-Canon, she then reiterates it to the second by noting that none of what happens in the book is canon. Also, to avoid any confusion, what she means by “you’ll still be getting Zekk’s story” is that Zekk was going to reappear in later FOTJ novels, but it has nothing to do with what happens in the book itself. So yeah, unless I’m missing something, the publisher’s summary/blurb is just as non-canonical as the novel itself. Obviously, that also puts into question the validity of that accolade of Caedus’.

Anyway, I'm curious: does this mean the TOR brigade have well and truly cucked not only to supremacy quotes, but to dubiously canon publisher summary/blurb supremacy quotes as well? Or will we see yet another 180?

Well, this is going to be an amusing exchange.

@LOTL: Try actually making an argument other than "You're wrong" and "What a contrived explanation" or I won't bother.

> Korriban wrote:And Krayt is the best duelist with force abilities outstripping any sith of his era.

By the same logic that is.

Lol. The quote is unequivocally C-Canon.

Though the contents of the book are N-Canon, LFL policy holds a source having retconned or erroneous material would not delegitimize the source as a whole. Only the contents that are N-Canon would be removed. Unless you want to toss almost half of all quotes, because I assure you I can find at least one N-Canon error or retconned statement in most sources? Not to mention while Rostoni initially said the events of the book are N-Canon--which is irrelevant anyway for reasons described--the basic gist of the plot highlighted in the article is later canonized in FOTJ, which mentions Zekk's disappearance for months and basic political intrigue developments.

While blurbs or publisher summaries are N-Canon, LFL policy holds N-Canon sources become C-Canon if covered under a C-Canon source. This rule has canonized many stories in Star Wars Tales. Likewise here, the N-Canon blurb is written as a description on the C-Canon official Star Wars website. That renders the statement no longer an N-Canon blurb, but rather a statement included apart of a C-Canon source. The same applies to blurb phrasing repeated in other sources as descriptions.

Put simply, while a blurb or publisher summary is N-Canon, being posted as a general description on a C-Canon website would canonize it under LFL policy. To address ILS' question, the SWTOR Brigade are adherents to the rule of LFL. Accordingly, we do not recognize blurbs nor ever plan to do so, but we do recognize C-Canon statements. Most blurbs or publisher summaries are not posted on starwars.com (e.g. the Darth Plagueis blurb), so they would not materialize into C-Canon too.

Feel free to pull me wrong by rolling up with your own LFL policy arguments or statements, and I'll retract the thread.

@DarthAnt66 My points on the quote itself remain unaddressed, canon policy shenanigans aside.