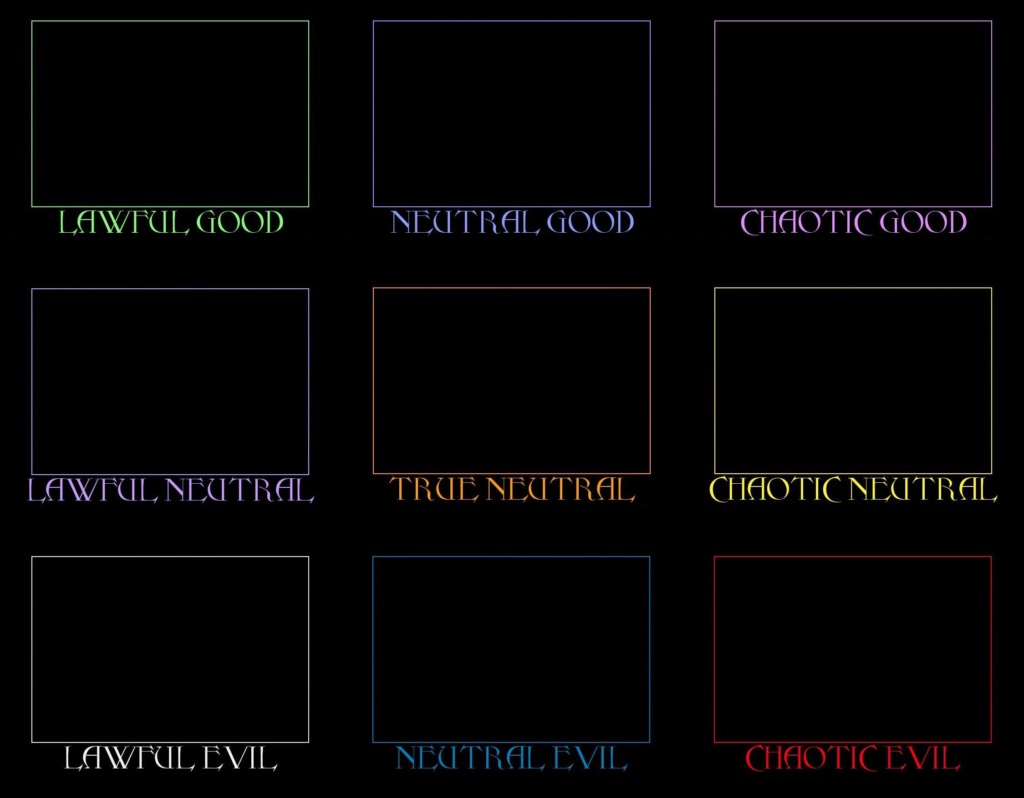 Select the appropriate alignment for the character Anakin Skywalker. If you believe an iteration of Anakin is different from another, (i.e: AOTC Anakin has a different alignment than TCW Anakin) then you can select multiple alignments for multiple iterations. The Knightfall and suited iterations of Darth Vader are not to be used here, since they are very much different characters, and will be used in their own thread in the future.

A character's general moral and personal attitudes are represented by its alignment: lawful good, neutral good, chaotic good, lawful neutral, neutral, chaotic neutral, lawful evil, neutral evil, or chaotic evil. A character's alignment is not a straitjacket. Each alignment represents a broad range of personality types or personal philosophies, so two characters of the same alignment can still be quite different from each other.

A lawful good character acts as a good person is expected or required to act. He combines a commitment to oppose evil with the discipline to fight relentlessly. He tells the truth, keeps his word, helps those in need, and speaks out against injustice. A lawful good character hates to see the guilty go unpunished.

A neutral good character does the best that a good person can do. He is devoted to helping others. He works with others but does not feel beholden to them.

A chaotic good character acts as his conscience directs him with little regard for what others expect of him. He makes his own way, but he's kind and benevolent. He believes in goodness and right but has little use for laws and regulations. He hates it when people try to intimidate others and tell them what to do. He follows his own moral compass, which, although good, may not agree with that of society.

A lawful neutral character acts as law, tradition, or a personal code directs her. Order and organization are paramount to her. She may believe in personal order and live by a code or standard, or she may believe in order for all and favor a strong, organized government.

A neutral character does what seems to be a good idea. She doesn't feel strongly one way or the other when it comes to good vs. evil or law vs. chaos. Most neutral characters exhibit a lack of conviction or bias rather than a commitment to neutrality. Such a character thinks of good as better than evil-after all, she would rather have good neighbors and rulers than evil ones. Still, she's not personally committed to upholding good in any abstract or universal way.

A lawful evil villain methodically takes what he wants within the limits of his code of conduct without regard for whom it hurts. He cares about tradition, loyalty, and order but not about freedom, dignity, or life. He plays by the rules but without mercy or compassion. He is comfortable in a hierarchy and would like to rule, but is willing to serve. This reluctance comes partly from his nature and partly because he depends on order to protect himself from those who oppose him on moral grounds. Some lawful evil characters have particular taboos, such as not killing in cold blood (but having underlings do it) or not letting children come to harm (if it can be helped). They imagine that these compunctions put them above unprincipled villains.

A neutral evil villain does whatever she can get away with. She is out for herself, pure and simple. She sheds no tears for those she kills, whether for profit, sport, or convenience. She has no love of order and holds no illusion that following laws, traditions, or codes would make her any better or more noble. On the other hand, she doesn't have the restless nature or love of conflict that a chaotic evil villain has.

A chaotic evil character does whatever his greed, hatred, and lust for destruction drive him to do. He is hot-tempered, vicious, arbitrarily violent, and unpredictable. If he is simply out for whatever he can get, he is ruthless and brutal. If he is committed to the spread of evil and chaos, he is even worse. 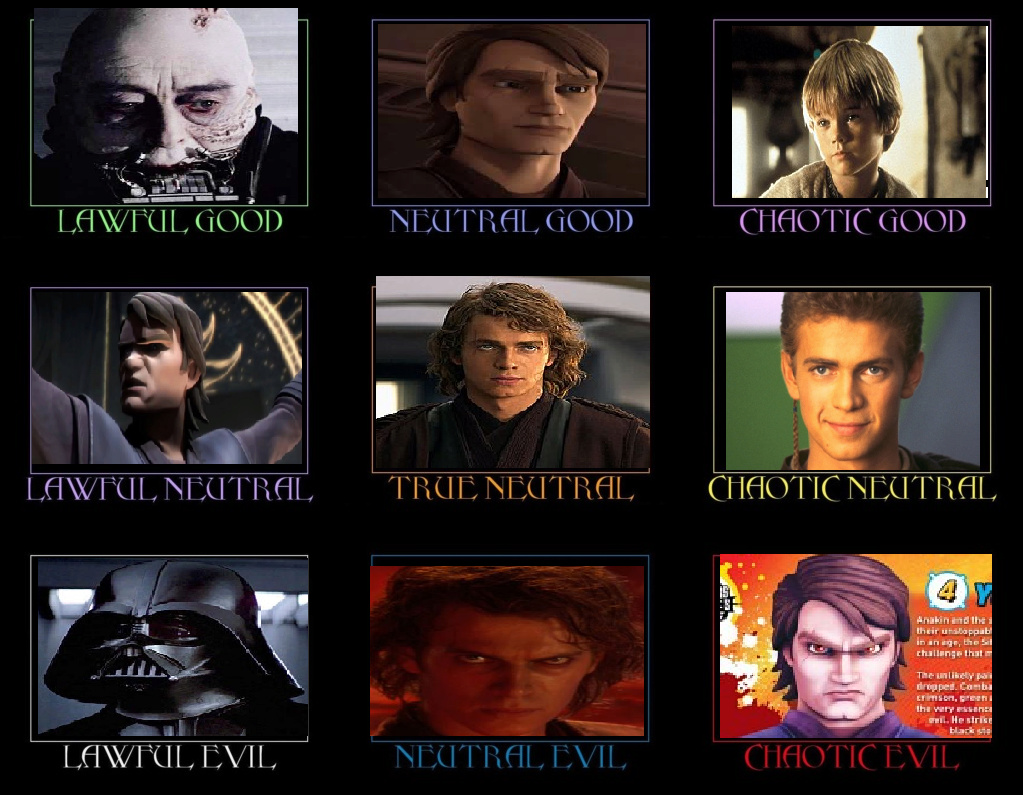 can you provide a source for the chaotic evil scan?

Can't remember but I found this: 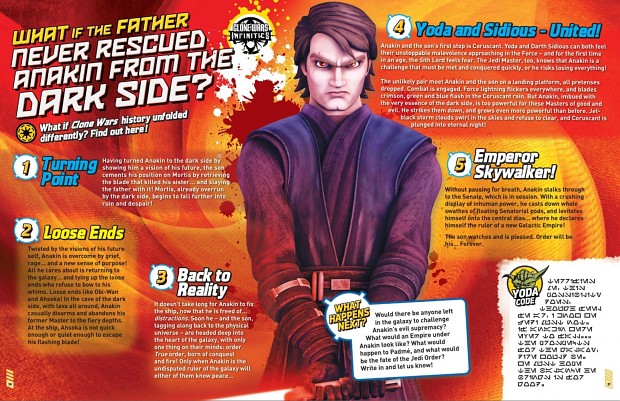 ILS wrote:Can't remember but I found this:

is this a scan for a what whould happen if anakin joined the son,if so then damn the guy is overpowered

Message reputation : 100% (2 votes)
No its actually about what would happen if Anakin joined the Daughter and became the embodiment of the light side

ILS wrote:No its actually about what would happen if Anakin joined the Daughter and became the embodiment of the light side

Nice job. Can you explain why you made some of those choices? Particularly Lawful good and neutral, and true neutral and neutral evil (or just explain all of them while your at it, lol).

Chaotic Good- Anakin has that kid sense of justice which is basically whatever he thinks is right.

Lawful Neutral- This is essentially the role Anakin would take as the keeper of the Balance, he maintains neutrality and balance between the Light (good) and Dark (evil) duality

True Neutral- I don't think Anakin is particularly good or evil, particular chaotic or lawful at this point in time. He wants to have a normal relationship with his wife and child, cares about the Republic and is skeptical of the Jedi. At the same time he still turns in Sidious as soon as he is revealed, even though he's been making some bad decisions overall.

Neutral Evil- Anakin isn't quite the machine Vader is here, but he's definitely completely evil, and not just because he's crazy/chaotic. He has ambitions for starting his own empire, killing Sidious, destroying the Jedi, is willing to commit infanticide to do it. He basically doesn't give a shit about anyone apart from himself and by extension his pregnant wife.

Lawful Evil- I feel this should be fairly self-explanatory, it's actually the first one I thought of. Vader embraces the strict Sith and Imperial hierarchy and his place in it, and is willing to work within the system to achieve his ambitions, even if for now he has to settle for being a subordinate, even to Tarkin to an extent. He's just as evil but much colder and more calculating here.

Lawful Good- Anakin is reborn and finally has a solidified sense of morality: doing the right thing, saving his loved ones, even if it means his own death. He dies as a true Jedi. Very simple, very eloquent.

Is there a moronic sad pile of crap category? 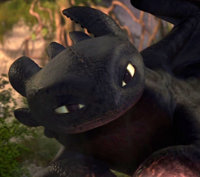 ILS wrote:Neutral Evil- Anakin isn't quite the machine Vader is here, but he's definitely completely evil, and not just because he's crazy/chaotic.

I don't think "chaotic" and "crazy" should be used interchangeably.  A chaotic character is just impulsive, ruled predominantly by their immediate emotions rather than by rationality or by a personal code of conduct.

ILS wrote:Lawful Evil- I feel this should be fairly self-explanatory, it's actually the first one I thought of. Vader embraces the strict Sith and Imperial hierarchy and his place in it, and is willing to work within the system to achieve his ambitions, even if for now he has to settle for being a subordinate, even to Tarkin to an extent. He's just as evil but much colder and more calculating here.

Working within the law doesn't necessarily make a character "lawful."  For example, if Vader abides by the laws of the empire because it is currently in his best interest to do so, but is willing to break the empire's laws when it suits him, that's not indicative of lawful character.  If you see Vader as someone who is "calculating" and weighs the pros and cons of taking action, rather than someone who makes decisions by referring to a set of rules, then that's more in line with neutral evil.

Note that being capable to plan ahead doesn't really exclude someone from being chaotic. Drow are a prime example in D&D, they can make webs of intrigues that might need decades to blossom and they are all chaotic evil mostly.

Cyborg Vader is a Neutral Evil with limited capacity to act, imo, though I can understand those that put in together with Lawful Evil. I just think that Vader's adherence to a certain kind of tradition or morality is driven by necessity and lack of options and it isn't true commitment, hence my NE for him.

I agree that normal Anakin is TN.

Kid Anakin is probably chaotic neutral, much like AotC Anakin.