@HellfireUnit
Let’s keep a cooler tone, please. What’s the point in pointing out one another’s faults in the past? If KoB asked you to provide an argument, please do so.

Exar Kun in his spirit form was much weaker than in his prime incarnation as his power was decimated by the Wall of Light attack: 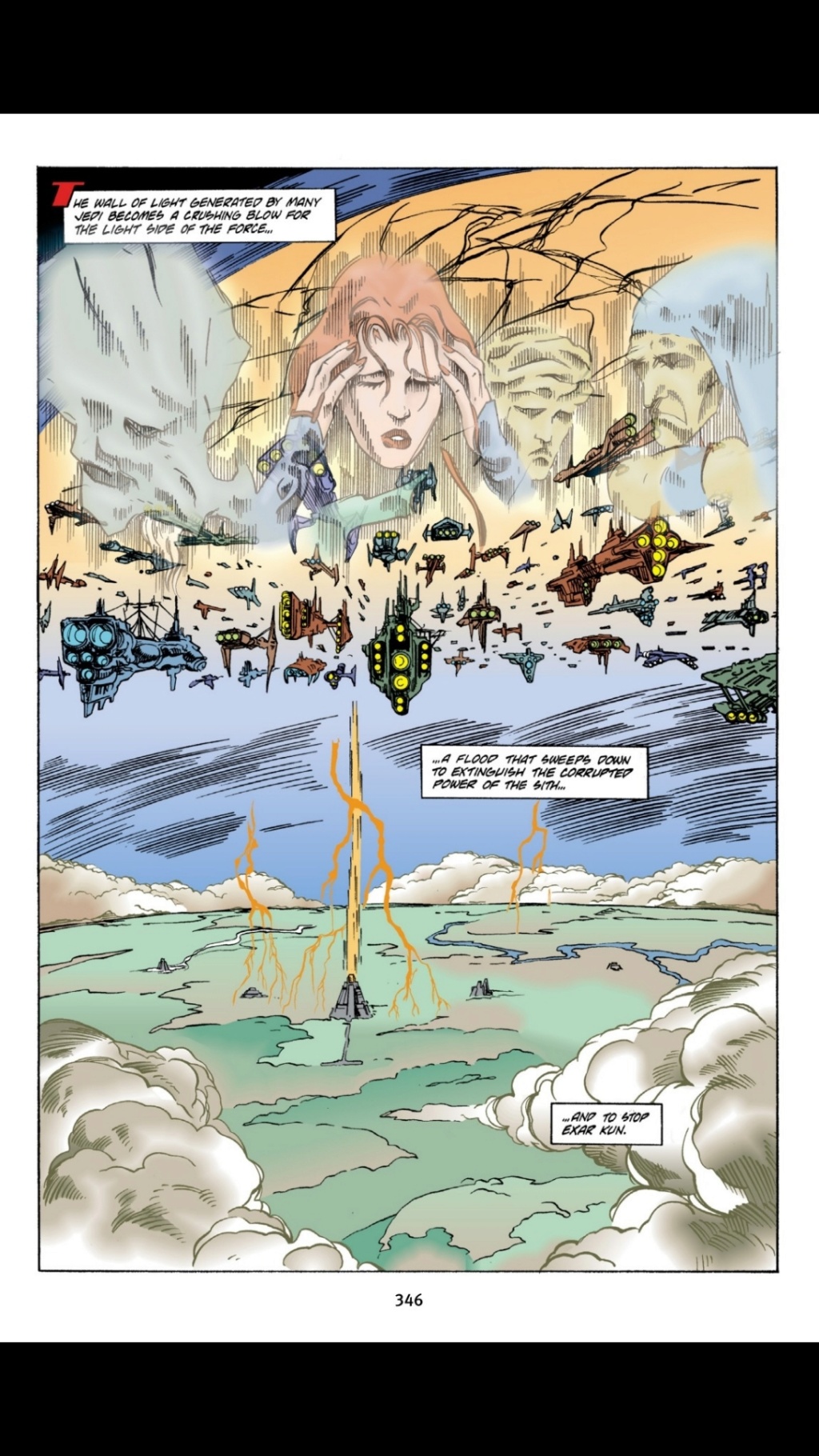 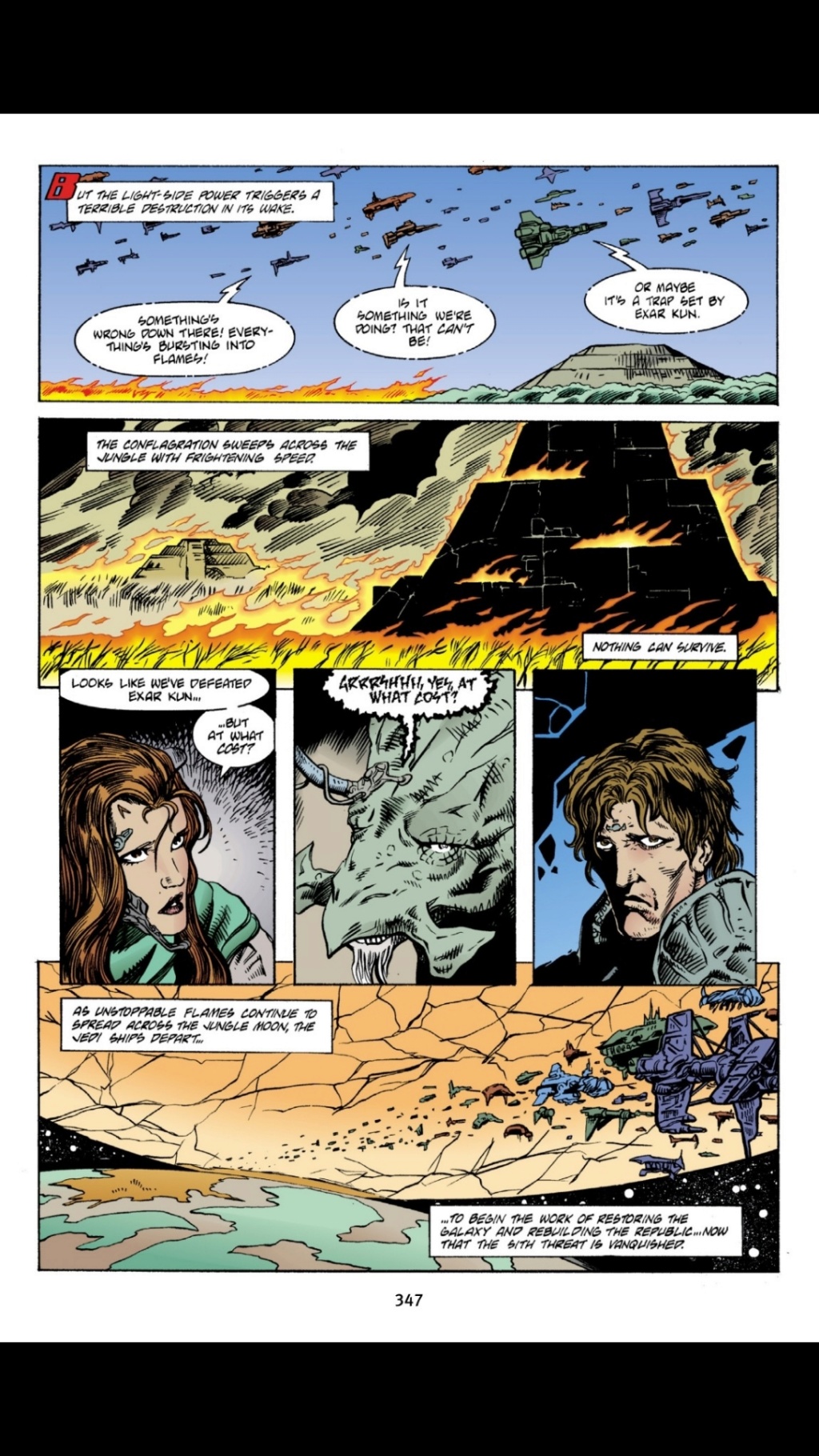 It's a fact that in spiritual form Exar Kun was capable in his own right of defeating Master Luke:

Champions of the Force wrote:Afraid to challenge the dark power that had been sufficient to warp other students and defeat Master Skywalker.

Master Luke was in his prime of power at that point:

Champions of the Force wrote:Luke clapped him on the back and smiled with dark-ringed eyes that shone with an inner brightness stronger than ever before. As he conquered each seemingly insurmountable obstacle, Luke's Jedi powers grew greater and greater- but, like Obi-Wan Kenobi and Yoda, a Jedi Master learned to use his powers even less, relying on wits instead of showmanship.

Redeemed Luke was definitely stronger than he was against Vader:

The Emperor, Dark Empire #2 wrote:“You’ve grown very strong in the Force since last we met...“

Against Vader, pretty much every source states Luke either surpassed or equated him:

Beware the Sith wrote:Although Darth Vader and Luke Skywalker are equally strong in the Force, their duels are more than just about physical strength.

Jedi Battles wrote:Father and son were now equally strong with the Force and equally skilled with their lightsabers.

Return of the Jedi Comic wrote:On the Death Star, father and son grimly clash! Brutally, aggressively, Darth Vader brings his full strength and power against the younger man. But unlike the first time they dueled in the carbon-freezing chamber of Bespin's Cloud City, this is a battle of equals. The young Jedi has grown in the interim, and if there is any true advantage, it seems to have shifted to him.

Shadows of the Empire wrote:Obi-Wan was gone, and the other Jedi were all extinct, save one, who was the strongest of them all. His own son. He had told the Emperor that Luke Skywalker would join them or die. The real truth was only slightly different: Luke would join Darth Vader or die. It would be something to look forward to. That would be the duel of a lifetime. This wasn’t even exercise.

Vader cannot win here, I'm doing you a favor by not using a feats comparison.

Bumping to next page.

What feats put Kun near Vader? Vader has the favor of Banite scaling and performed superior dueling, strength, speed, durability feats. First of all what makes people think that Kun is even above Bane? Kun has not displayed anything that can overwhelm Vader's defenses. Even with Kyp's might, they are unable to harm an extremely hindered, holding back Luke. A Kun with lethal intent only could KO Aleema Keto. Drain isn't even a factor when it comes to combat since Anakin already possessed the knowledge to resist it. When it comes to dueling feats, even a massively pre-prime Vader does better than Kun. Stalemating Ulic and beating Vodo are supposed be impressive? The weakest version of Vader melts durasteel with his Force Scream whereas Kun's barely did anything. And I am not going to even mention Kun relying on external amps to perform his best feats which Vader can counter anyways.

All of these aside, why the hell you are jumping all out of sudden? You know I don't like to argue with AP.

If you don't like to argue with him, then you should just refrain from interacting entirely with him. Shit talking adds nothing of substance to this thread

Are you an admin or something like that I have failed to realize? What's it to you KoB, don't put your nose over something that doesn't involve you in the slightest.

I don't have to be a mod to not want toxic shit talking and trolling pervading threads. And this is a public thread, so I have every right to voice my disapproval of what's going on here. FYI: You're arguably breaking rules 1,2, and 4 that can be found on the global guidelines thread. I don't want to alert the mods, which is why I'm asking you to stop this, so this doesn't become a larger issue.

Veritable mountains of them.

Just one of Exar Kun's techniques was superior to all of the other lightsaber techniques Ventress ever learnt. Ventress is a better duelist than basically everybody Vader faced after Mustafar.

Kun breaking through a wall of beskar, surviving hundreds of breaks in his bones and being far beyond being faster than the vision of a powerhouse such as Nomi Sunrider who was amped on the energy of saving her own daughter Vima is probably up with Vader's augmentative capabilities.

@HellfireUnit wrote:First of all what makes people think that Kun is even above Bane?

By being better than him in absolutely everything.

@HellfireUnit wrote:Kun has not displayed anything that can overwhelm Vader's defenses.

There's a plethora, but I'm going to save us both the time. Call it mercy.

@HellfireUnit wrote:Even with Kyp's might, they are unable to harm an extremely hindered, holding back Luke.

Dark Apprentice wrote:Kyp made a dismissive gesture with one hand, and a sudden wave of dark ripples splashed across the air like the shock front of a concussion grenade. Luke stumbled backward. The lightsaber turned cold in his hand. Frost crystals grew in feathery patterns around the handle. At the core of the brilliant green blade a shadow appeared, a black disease rotting away the purity of the beam. The humming blade sputtered, sounding like a sickly cough. The black taint rapidly grew stronger, swallowing up the green beam. With a frizzle of sparks Luke’s lightsaber died.
Trying to control his growing fear, Luke felt a sudden brush of cold behind him. He turned to see a black, hooded silhouette—the image that had impersonated Anakin Skywalker in Luke’s nightmare…the dark man who had lured Gantoris into a devastating loss of control.
Kyp’s voice came as if from a great distance. “At last, Master Skywalker, you can meet my mentor—Exar Kun.”
Luke dropped his useless lightsaber and crouched. His every muscle suddenly coiled and tensed. He rallied all the powers of the Force around him, seeking any defensive tactic. With the Sun Crusher looming behind him, Kyp stretched out both hands and blasted Luke with lightning bolts like black cracks in the Force. Dark tendrils rose up from the gaps in the temple flagstones, fanged, illusionary vipers that struck at him from all sides. Luke cried out and tried to strike back, but the shadows of Exar Kun joined the attack, adding more deadly force. The ancient Dark Lord of the Sith lashed out with waves of blackness, driving long icicles of frozen poison into Luke’s body.
He thrashed, but felt helpless. To lose control to anger and desperation would be as great a failure as if he did nothing at all. Luke called upon the powers that Yoda and Obi-Wan had taught him—but everything he did, every skillful technique, failed utterly.

Nor did Kun need Kyp's power, just energy in place of his total lack of any. As Kun's spirit is confirmed to be > Luke:

Champions of the Force wrote:Afraid to challenge the dark power that had been sufficient to warp other students and defeat Master Skywalker.

Ulic himself was far greater than Aleema Keto:

Dark Empire Endnotes wrote:During the years he [Ulic] had transformed completely, into a warrior magus with dark powers far beyond those demonstrated by any other member of the Krath!

Until he was stripped of his weapon and power by Vodo:

NOTE: All of Vodo's aid got stomped by Ulic prior to the aforementioned years of tremendous power growth.

And Kun's power was so much greater than Vodo's that Vodo was 'no match' for him despite Kun maintaining control on tens of thousands of senators and having just ragdolled Sylvar*:

Power of the Jedi Sourcebook wrote:Ulic’s trial was interrupted by Exar Kun, who met his former Master face to face for the first time since his long descent into darkness. The two fought, and Vodo-Siosk Baas was no match for Exar Kun’s double-bladed lightsaber and deep reserve of dark side power. Vodo-Siosk perished, slain by his former apprentice.

Sylvar being the same woman who moved faster than Nomi could see:

Nomi having literally stomped Aleema twice before Sylvar moved faster than she could see:

But no, Kun couldn't kill Keto.

@HellfireUnit wrote:Drain isn't even a factor when it comes to combat since Anakin already possessed the knowledge to resist it.

As if Exar Kun is going to bother with fucking Force Drain.

@HellfireUnit wrote:When it comes to dueling feats, even a massively pre-prime Vader does better than Kun. Stalemating Ulic and beating Vodo are supposed be impressive?

Considering the Jedi iteration of Ulic stomped a warrior with the collective lightsaber knowledge and experience of King Adas, Freedon Nadd and Naga Sadow. I really don't see where you're getting the idea that the vastly superior prime Kun doesn't hold up.

@HellfireUnit wrote:The weakest version of Vader melts durasteel with his Force Scream whereas Kun's barely did anything.

The New Essential Chronology wrote:Exar Kun let out a tremendous shriek that echoed across the galaxy, calling in despair upon Master Vodo, whom he had abandoned.

The Essential Guide to Characters wrote:Nadd offered Kun a way to live, and to repair his broken body: if he embraced the dark side, he would be healed. The betrayal of light was not an easy one for Kun, but the desire to live was stronger. He accepted the dark side, his screams reaching out across the galaxy and creating ripples in the Force.

Vader's Screams melt durasteel, Kun's are on a galactic scale and create ripples in the Force felt by all Jedi. That was Jedi Kun. Lmfao.

@HellfireUnit wrote:And I am not going to even mention Kun relying on external amps to perform his best feats which Vader can counter anyways.

Almost all of Exar Kun's best feats are on a light side nexus such as Ossus or a non-nexus planet such as Coruscant. His only major feat on a nexus was capital ship telekinesis before he even went to Cinnagar. Roflmao.

@HellfireUnit wrote:You know I don't like to argue with AP.

We all know why that actually is.