What is the relationship between Form VII (Juyo/Vaapad) and Form II (Makashi)?

What is the relationship between Form VII (Juyo/Vaapad) and Form II (Makashi)?

Pretty sure this was asked on another board.

There isn't any real "relationship" between the two. Makashi emphasises a systematic technique, employing swift, precise strikes to exploit an opponent's weaknesses and openings to devastate them. It's easily the most elegant of the forms, and also focuses on conserving energy.

Juyo/Vaapad's strength is its unpredictability, even (at times) to its user. It's less kinetic and strength oriented than Djem So (albeit not by much) and focuses on speed, ferocity and power to overwhelm its opponents. It's heavily reliant on emotional chaos within the user, where rampant emotions are held in a tight grip to the point that they can be overwhelming. It's why its use is limited among both Jedi and Sith as it can either lead them to the dark side - in the case of the Jedi - or make them slip up and be easy targets - in the case of both.

Both have their weaknesses. As a duelling form, Makashi is naturally less suited to blaster deflection. It also lacks kinetic energy and so it's ill suited against physically overpowering opponents who focus on overwhelming their opponents through sheer strength. As Dark Disciple for example has also shown us, its rigidness can also make its practitioner weak to unpredictable fighting styles. One of Makashi's strengths is its practitioner's ability to analyse an opponent's fighting style and exploit it, but an unpredictable style has no obvious pattern or rhythm for a Form II user to track and exploit.

It might sound like Form VII is more effective against II than vice versa, but form VII also has its own fair share of weaknesses. Aside from the emotional aspect of VII which can make its user either fall to the dark side or make stupid mistakes and decisions due to their bloodlust blinding them, it is also notably quite vulnerable if they're put on the defensive. Due to the unpredictability of the form, it rarely - if ever - involves its users planning to use it as a defensive form. Because of this, practitioners have to limit themselves to predictable defensive manoeuvres (unless they've mastered another form like I, III or VI, that is), which can make them an easy target for a more orthodox swordsman.

This unpredictability can also make them vulnerable to Force attacks, as the nature of form VII means that their fighting style focuses on attacking until their opponent is overwhelmed. Unfortunately, if the opponent manages to tag them with a Force attack or disrupts that assault, then form VII is automatically at a disadvantage, regardless of how skilled they are. A Makashi swordsman like Dooku for example can and has done this to form VII practitioners before, like Sora Bulq: 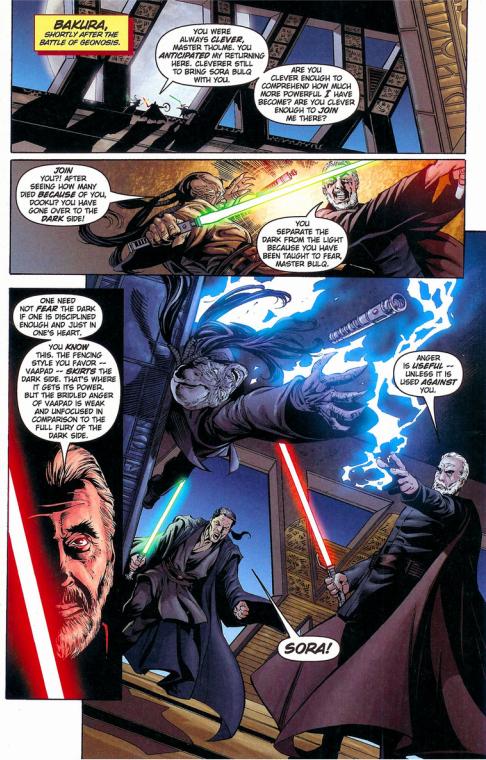 Note that while he lacks many feats, Sora is easily in the top 10 duelists within the Jedi Order by the start of TCW, being only behind the likes of Mace (who he performed very well against, albeit Mace was probably emotionally hindered) and Yoda. However, Dooku was able to exploit a moment where Sora overreached and left himself vulnerable, and instantly nailed him with a Force attack (lightning).

This is more relevant to Vaapad, but the form's emphasis on intense emotions and use of the Force in combat - when used to its max, that is - can make it incredibly tiring, arguably even more than Ataru. Because the user is channeling such intense emotions, it's possible for them to burn out and tire before their opponent is defeated. While a master like Maul, Sidious or Mace are far less likely to suffer this due to them knowing how to maximise their abilities with the form, with the latter two we've seen cases of their lightsaber technique leaving them both tired or even exhausted.

TLDR: Makashi and Juyo/Vaapad both have their own strengths (conserves energy, great for exploiting openings, very technical vs overwhelming, incredibly powerful and unpredictable) and their own weaknesses (rigidness, poor choice for blaster deflection, and no real way to employ kinetic force vs can be hindered by their emotions, vulnerable to Force attacks and surprise manoeuvres (AKA poor defensive choice), and incredibly tiring).