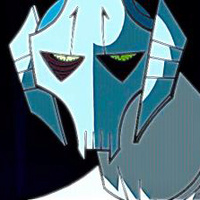 Message reputation : 100% (8 votes)
COMPENDIUM OF POWER
A collection and look at the various sources of power for the ancient sith

As we know the exiles first arrived on the planet of Korriban, where they went on to rule the sith species there, worshipped as gods. while conflicting sources on that, the book of sith being the most recent depiction of the events (2012)  state that upon arrival these exiles while superior were not worshiped as gods, at least not at first. We also know from many other sources such as the Darth Bane series and BoS state the nexus of Korriban lost potency over time, implying that if we wind the clock back the potency will be higher, so upon arrival the exiles would no doubt benefit from a prime Korriban nexus which would amplify their powers to higher levels. levels said for those who wield the darkside to "be amazed at the strength they gain" 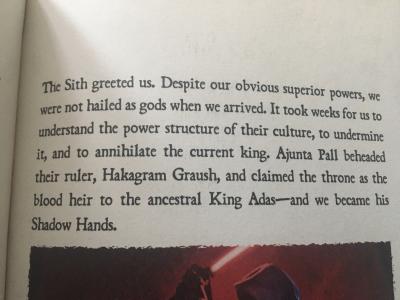 So the already superior exiles would then bathe in this powerful nexus of darkside energy to bring their already superior powers to "amazing" new levels of power. as they carved their claim into the ranks of their new home. They then went on to Ziost, another notable darkside nexus even to the age of SWTOR, and was said to be the throneworld of the sith purebloods since prehistory. 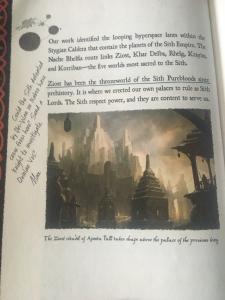 and then of course dromund kaas but I believe you get the point. This section is rather small but mostly used to highlight that the exiles would spend majority of their time on a DS site in its prime, amplifying their powers far beyond what would be normal off nexus. A nexus that would certainly help in the creation of the following section.

The bling of the forefathers, the bejewled necklaces and gauntlets of strange mystic powers, the sith of old were noted for such amulets, some notable people being Exar kun, Marka Ragnos, Murr. who wore weapons fashioned to amplify and focus there power and will be featured below, such objects noted to temporarily increase ones abilities to manipulate the force, amplify it and even protect oneself against the force among other noted affects. 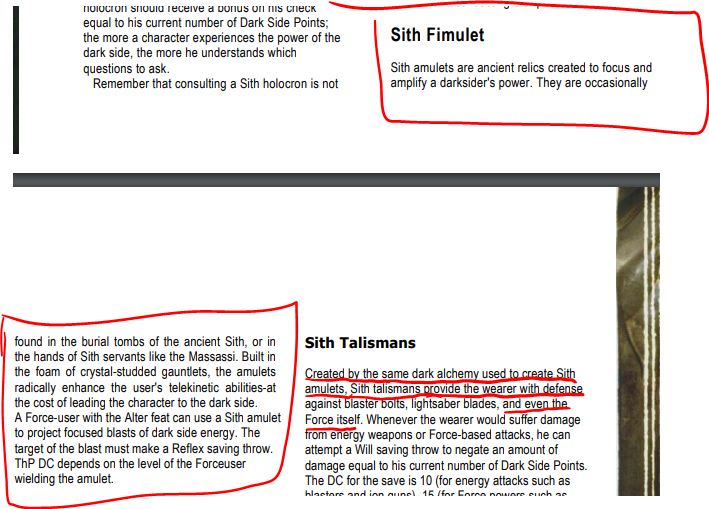 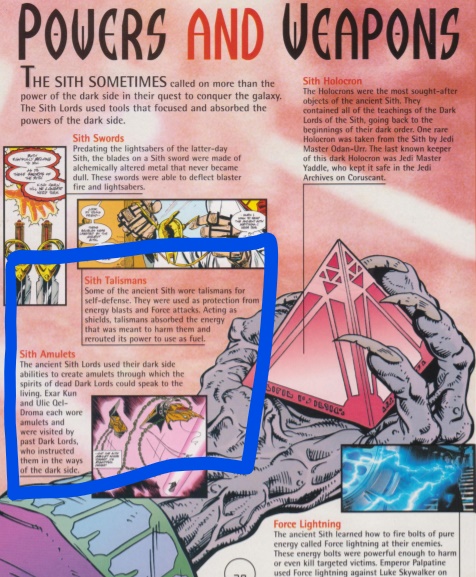 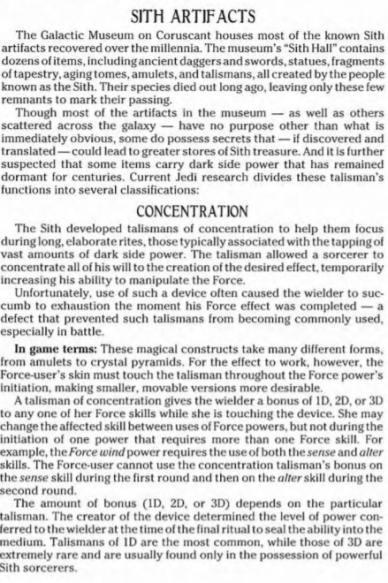 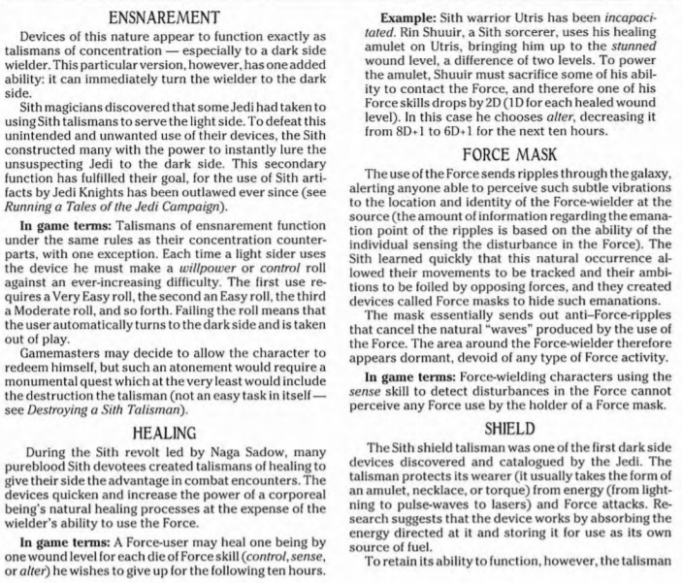 they wore objects to bolster their power. rather impressive abilities, advanced healing, protection from the force, amplifying of powers and even a sort of "training wheels" to assist them with spells and rituals. but not all amulet or fimulets did the same thing. such as our next topic the infamous muur talisman, built to house the spirit of the exile karness muur. keep its host alive, unaged but most importantly to create and control the deadly rakghouls. 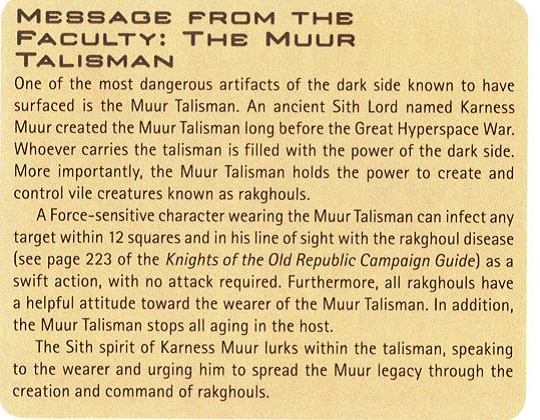 Then there's Marka Ragnos' gear, his gauntlets that "pulsed with dark power" likely granting him the abilities listed above, protection, healing, augmenting force power, and his famous scepter, said to be able to drain and give people the power of the force. Rather powerful ability for a reigning dark lord. Most impressive.

while not much info is known on the next few objects but its clear that much like Marka's gauntlets they had a tainted effect and likely had some sort of amping powers and maybe defensive boosts.

however, the exiles and ancients were not the only ones to use bling to make themselves stronger, their successors in the era of KOTOR also fashioned gear to improve ones abilities, be it tech to allow greater levels of willpower (and in turn greater dark side feats) masks to protect from distractions for greater, deeper concentration on powers, or even gear that outright was specific to force alignment 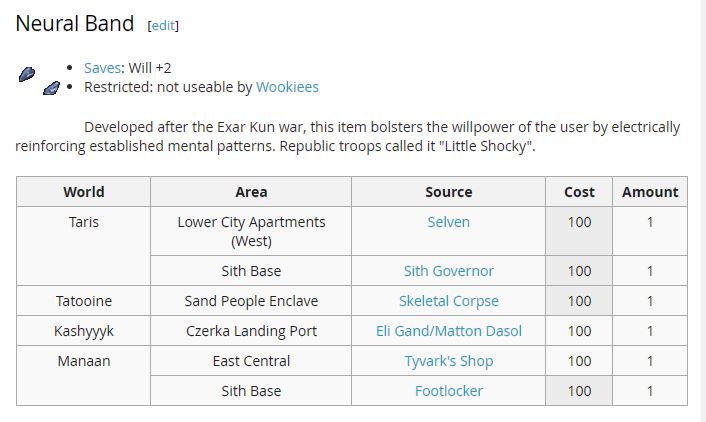 But there is more, the star forge itself also provided clothing to bolster ones power, revan wore robes made from the star forge said to focus and fuel his power, and later had armor made that would enhance anyone's force powers, not specifically darkside in nature. the star forge, while a monstrous amp in its own right, isn't super relevant to this, when its mostly on the ancients and thus wont be noted. the ancients also created special armor to protect themselves from even lightsabers and force attacks. Tulak Hords mask noted to have an eerie glow, likely having these effects 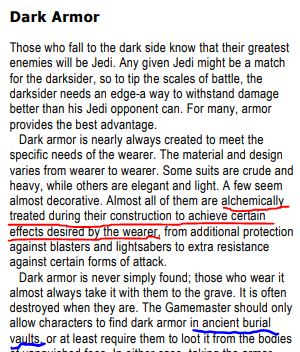 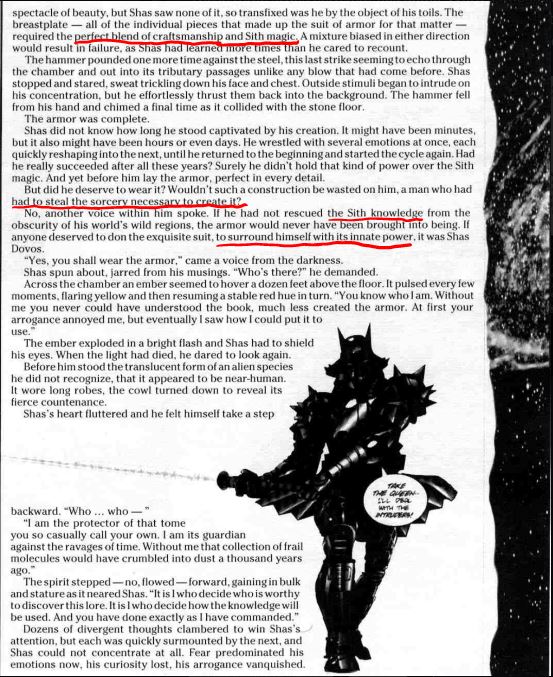 Then lastly to wrap this up we have Exar Kuns famed gauntlets which he got from Naga Sadow. who's appearance and displays of power match that of a sith filumet above, needless to say I wouldnt think its too much of a leap to assume Naga Sadow wasnt the only one walking around with such bling when he, or even Marka Ragnos was ruling the empire, it was in fact a common thing that has been perfected since the age of the exiles who experimented and learned from the sith primitives they conquered

The two big ships I wish to note are both from Naga Sadow, that being his personal battleship, later unearthed by Exar. and his meditation sphere, starting with the sphere it was able to make Naga Sadow preform feats on an unprecedented scale from conjuring up armies to making suns go nova. which was achieved with a feat of legendary sith engineering. key word being engineering, the sith of old had tech that somehow worked and bolstered ones force powers to ridiculous levels and vice versa (such levels that Aleema was able to replicate Naga's feats when under such amplifications) 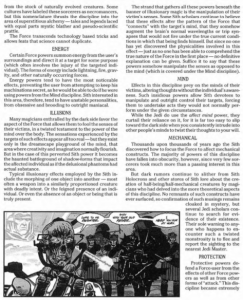 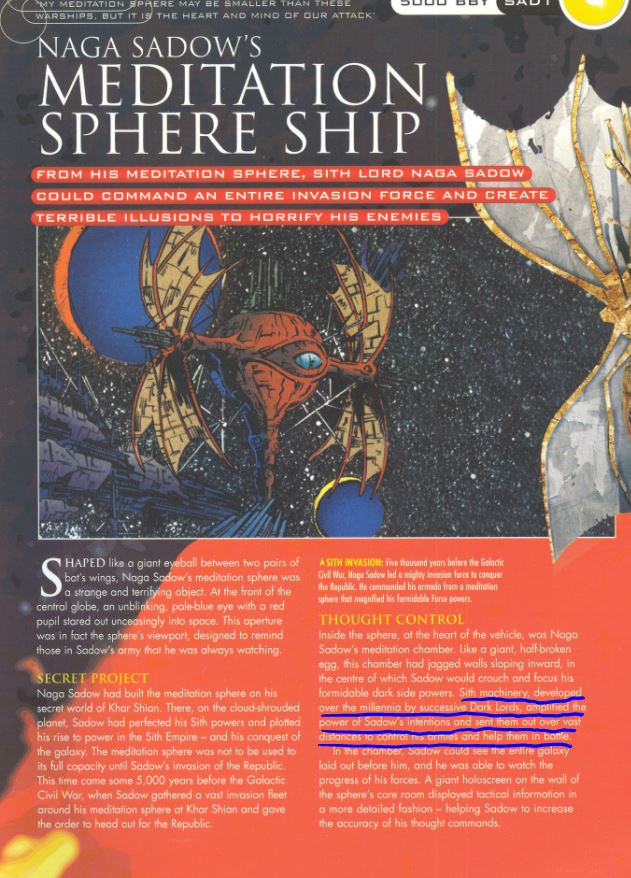 This type of meditation sphere was also noted by Syn in the book of sith, which should be 1000 years before Naga's time

it is quite possible that such spheres were used during the exiles reign, and maybe used during many different rituals or alchemy
moving on to Naga's Battlship, the same one unearthed and helmed by Exar Kun, the battle ship was equipped with strange tech/crystals that allowed one to achieve a similar effect as his meditation sphere, noted by Exar to Aleema 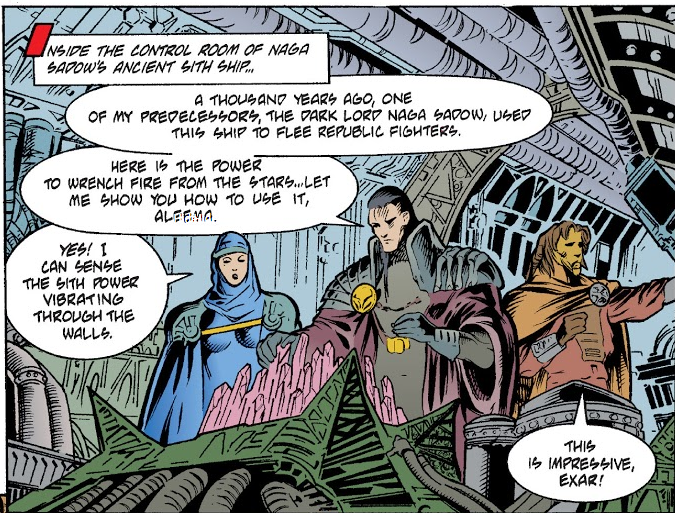 What is the interesting thing to note is that Naga's empire produced at least 100 sith battleships and all were said to be destroyed save for the flagship, this ship. which makes me believe that ALL the sith battleships were built to be able to unleash the same devastating power, or at the very least it can be argued. 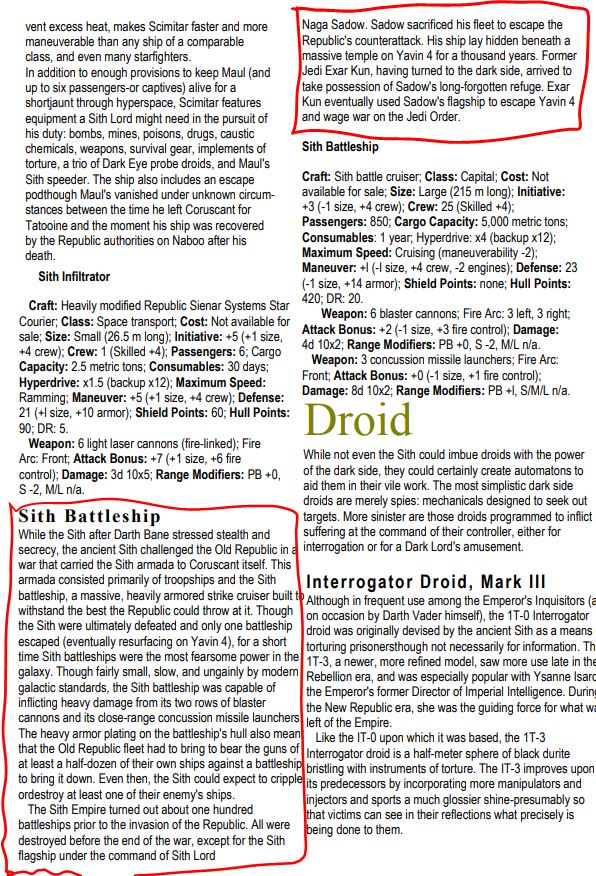 as noted above it was the flagship, here is the definition of flagship 1: the ship that carries the commander of a fleet or subdivision of a fleet and flies the commander's flag
2: the finest, largest, or most important one of a group of things (such as products, stores, etc.) —often used before another noun while the flagship could house this special sun destroying power, it makes no mention that the flagship itself is exclusive in this power, again arguable, leaving it for others to discuss.

Proceeding on to tech. They make little mention of tech however, that isn't to say their is no mention. they make note of sith alchemy apparatus' used and made specifically to power the process used in alchemy to change and create beasts 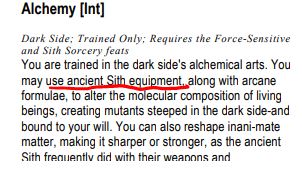 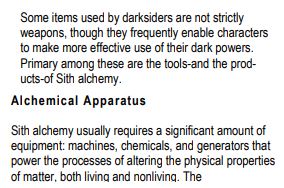 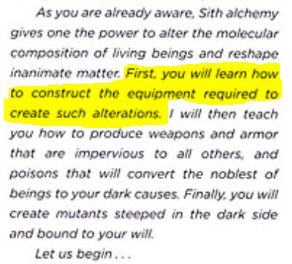 To summarize, the sith exiles/ancients had a sort of grasp on tech that allowed them to channel, amplify and focus their power to greater magnitudes or to preform feats that they may otherwise be incapable of doing without said tech, and lets not forget the greatest piece of tech amping the exiles, the star map itself, which needs no introduction and is stated to be the main source of their power.

This part is actually something i'm greatly looking forward to as I think its a point that is often overlooked, ignored or just not known, but ancient sith species developed architecture to focus and amplify the force, such architecture was noted by Sidious long past the time of the exiles as he sought refuge there to use its effects to halt his decaying body. noting it was the necropolis itself that would do so 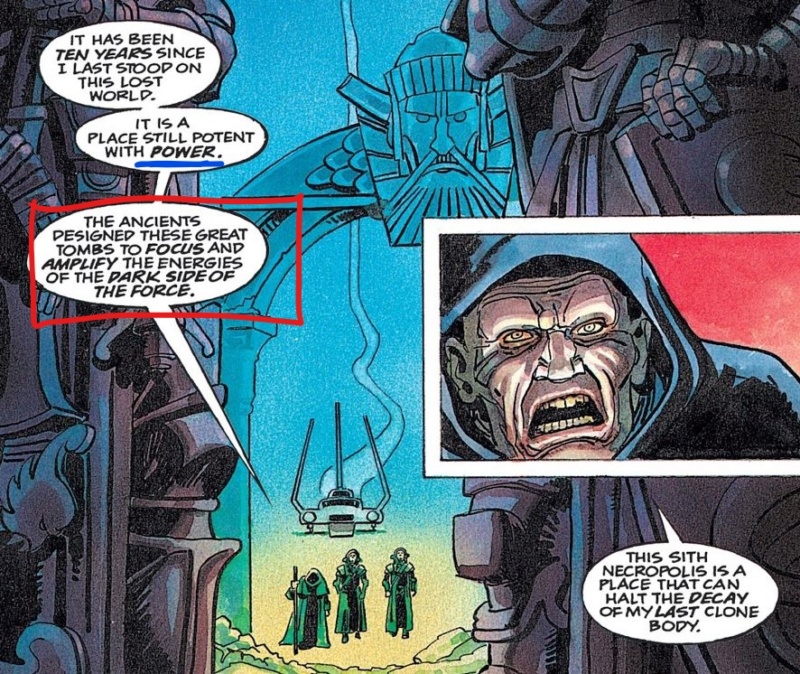 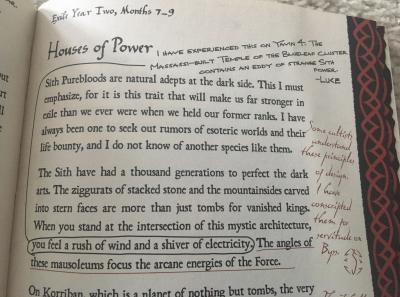 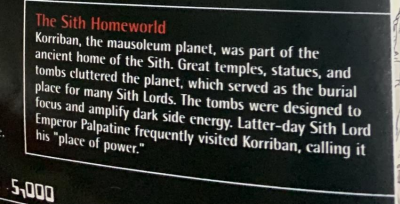 This was also later mentioned again in SWTOR codex. about Kun and sadow's temple construction. Even mentioning technology to manipulate the force as mentioned and talked above in section 3

the tombs and buildings were noted to be built before their rulers death, i feel it is easy to assume that this style of construction was thought of before the exiles arrival and continued well past their deaths, the architecture was also noted within syns journal

In conclusion, the exiles and ancients were the host to multiple amps often more then one at a time. Sitting on a powerful DS nexus to amp them to amazing levels, drawing on the star map (the main source amping them) have developed armor and weapons to further amp them and protect them, and lived and died in buildings that further amped them as they worked with tech to amp and assist their spells or alchemy process. The exiles and ancients had several layers of different sources of power and almost were never without some form of amp on them. I hope that this Compendium helps for further discussion and may inspire future blogs or even VS debates. thank you for reading

the ancients had a whole lot of amps, home planet being a DS nexus in its prime, wearing clothes to focus and amplify power, with talismans and other bling to power them up, sitting in buildings specifically made to focus and amplify their power and even travel around in ships capable of achieving and focusing their power, even amping it. while using tech to bolster willpower and help with their spells. amps amps amps amps

Last edited by Ghost of Grievous on October 15th 2021, 9:36 am; edited 6 times in total (Reason for editing : additional evidence)

Message reputation : 100% (2 votes)
See this is why I find the greater whole of the SW galaxy FAR more interesting than just looking at the characters themselves. There is just so much there to look and read and sometimes, reading through all this it can actually make characters even greater than just their feats or accolades alone.

Message reputation : 100% (2 votes)
this is pretty amazing. good job. time to kill ancients wank, since they need steroids just to be part of the conversation smh.

lorenzo.r.2nd wrote:this is pretty amazing. good job. time to kill ancients wank, since they need steroids just to be part of the conversation smh.

Funny how you think this does anything but aid in the wanking of later ancients.

lorenzo.r.2nd wrote:this is pretty amazing. good job. time to kill ancients wank, since they need steroids just to be part of the conversation smh.

Funny how you think this does anything but aid in the wanking of later ancients.