Forget 2x1, Vitiate is now forced to fight Darth Tyranus, Darth Maul, Savage Oppress, Asaj Ventress, General Grevious, Joruus C'baoth (Created as a clone before Jorus'es death, so he could replace him) and Anakin Skywalker (Darth Vader, pre-Suit). For some reason, he busts in attempting murder "Supreme Chancellor Palpatine" but discovers more than a half dozen Dark Siders .

Wow. Is he really so powerful that not only can he blast through all of these characters by himself, but that he doesn't even need explanation why?

Only one of these characters is equal to or stronger than the Revan or Vaylin, let alone the Outlander. The rest all fall somewhere around the range between Revan to Meetra or Senya.

Joruus C'baoth is quite impressive. As is Anakin Skywalker and Darth Tyranus. That counts as three imho.

Lord Vader is significantly beyond any of the strike team members. He might be stronger than Valkorion.

Okay I haven't actually read the material with Lord C'baoth, but according to Luke, in that novelization, Joruus C'baoth may even be more powerful than Lord Vader.

@Darth Chocolateis: Here's a cool video that Suspect Insight threw together earlier this year. Sort of relevant to this thread. Might be informative.

Thanks. I see Joruus seems to be nowhere near the guy at the bottom? I thought he was kind of impressive.

Darth Chocolateis wrote:Okay I haven't actually read the material with Lord C'baoth, but according to Luke, in that novelization, Joruus C'baoth may even be more powerful than Lord Vader.

"According to Luke Skywalker, the duplicate C'baoth was easily as formidable a foe as Darth Vader and completely twisted to the dark side of the Force." Source: The Thrawn Trilogy Sourcebook


Though even then, "formidable" means to inspire dread or fear according to the internet definition. So its only saying C'boath is a foe that can inspire as much fear as Vader could, not only anything to do with power.

Though do tell me if you mean something else.

BreakofDawn wrote:Only one of these characters is equal to or stronger than the Revan or Vaylin, let alone the Outlander. The rest all fall somewhere around the range between Revan to Meetra or Senya.

Citation needed for Revan being above TPM Maul

The Merchant wrote:Everyone Vitiate ever wronged + Satele stating he is the most destructive force the Galaxy has ever known probably makes him one of the strongest entities to ever exist in Wars tbh

Might be until 3600 BBY. Tenebrae's feat could also matter if it didn't take place in Satele's head.

eChOeS oF oBlIvIoN dOeSn'T cOuNt BeCaUsE iT wAs InSiDe SaTeLe's MiNd

Tenebrae was ENTITY in SWTOR times - he (or it) could manifest his powers with a body, outside a body, and also in mindscapes. Those who were touched by him could engage him in mindscapes by extension. He devoured a massive world including hundreds of Force-users outside a body anyways.

While discussing entities, WE need to suspend belief and assume the obvious (these beings do not conform to the laws of physics and such). They are beyond the understanding of mortals on average.

LadyKulvax wrote:Lord Vader is significantly beyond any of the strike team members. He might be stronger than Valkorion.

1. Jedi Master Lucien Draay represent a good fight to Darth Vader as per one source, and he is below both Revan and Malak as of the Mandalorian Wars endgame; Revan had become the most powerful Jedi in the galaxy as of this point in time.
2. Exar Kun, Darth Malak, and Darth Revan are counted among the most powerful Sith Lords in history as per multiple sources including a new codex entry.
3. Darth Malak surpassed Exar Kun while tapping into the powers of Star Forge by a significant margin as per one source, and Revan (KoTOR endgame) defeated him in single combat as per multiple sources.
4. Revan became more powerful than ever before as Revan (Reborn) which is independently stated and also apparent from his quick dismissal of Darth Nyriss who in turn defeated both Lord Scourge and Meetra Surik in single combat (confirming that members of the Dark Council can be among the most powerful Sith in the galaxy at any point in time). Irrespective of how many excuses you come up for Meetra Surik, she had help from Lord Scourge in this fight and still lost.
5. Revan (Reborn), Meetra and Lord Scourge - combined would have been taken out by Tenebrae [Corporeal Immortality Emperor Form] let alone his vastly superior ENTITY form.

There. The dots connect very well.

Please don't spread misinformation. Lucien Draay is a good fight for 'Darth Vader, Jedi Hunter'. Which is this: 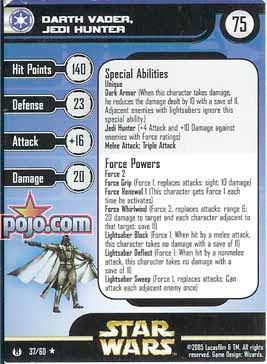 Exar Kun being beneath Malak was contradicted in 2011, Malak's currently sub-Valley of the Dark Lords Sith.

No. Just no. Count Dooku is a great duelist and very powerful Sith. Joruus C'baoth is as threatening as Vader, and Anakin Skywalker, pre suit is also a very real threat to a lot of powerful Sith. I highly doubt that Darth Nox could solo them all, including these three Sith.

Most of the team individually defeat Nox.

To be honest I thought Nox was pretty hot stuff too.

LadyKulvax wrote:Please don't spread misinformation. Lucien Draay is a good fight for 'Darth Vader, Jedi Hunter'. Which is this:

Exar Kun being beneath Malak was contradicted in 2011, Malak's currently sub-Valley of the Dark Lords Sith.

I have provided that information in one of my blogs that I wrote for this forum. Your reactions are uncalled for.

You continue to overlook the Star Forge factor in Darth Malak's case which made him 'nearly unstoppable' - this was no ordinary amplification and Bastila Shan cautioned that he would become too powerful for any Jedi to handle if not stopped in time - this is a revelation that you continue to struggle with to this day. Another factor is that Revan no longer restricted himself to the Light - he could draw from both the Light and the Dark sides of the Force to his benefit as he saw fit in his battles by the end of KoTOR - this form of enlightenment shaped him into a warrior having a unique skillset and packing considerable punch by extension. Darth Gravid attempted to follow suit only to turn insane and Darth Plagueis mentioned that this was impractical course for any Sith. Revan [The Prodigal Knight] made an offer to the Jedi High Council to shape a new generation of the Jedi with his teachings but they refused his offer and barred him from taking any Padawan. This was the golden opportunity for the Jedi Order to evolve as a whole but ancient traditions were deemed too important to ignore by the others. There are numerous ways to hype both Revan and Tenebrae by extension - do not forget this. Exar Kun is great but other giants should be respected as well.

Darth Chocolateis wrote:To be honest I thought Nox was pretty hot stuff too.

Compared to the other FU protags, no. Even after getting all 5/6 ghosts, she's still sub-EW.