Probably should have made it clearer that was what your confusion was about, then. Also, I don’t subscribe to it. I’m saying it’s an acceptable scaling chain that puts Revan > Kun, not necessarily that I follow it. I have different reasons for putting Revan above Kun but not Arcann above Kun.

Not sure how this adds up to the 'Malak is canonically superior to Kun' debate but consider the following:

“Freedon Nadd was a dark Jedi, he conquered Onderon long ago and became their king. The royal line is directly descended from him. The stories say that he was far worse than Revan and Malak ever were. This place is tainted and the Sith presence here makes the danger great."

"The soldier is correct. The dark side is strong here... and it will grant its strength to the Sith."


This seems to state that Freedon Nadd was superior to both Darth Revan and Darth Malak. Since Kun is superior to Nadd, then Malak could not be superior to Kun.

Looks like a SUBJECTIVE take on things. Being far worse may imply being more evil - nothing more.

Freedon Nadd corrupted and converted Exar Kun which is a significant display of influence on his part. Credit where due.

Darth Revan and Darth Malak - each had a significant impact on the galaxy as well.

The Sith Triumvirate was a byproduct of the legacy of Darth Revan and Darth Malak in Malachor V.

Darth Revan even had a secret group of followers in the reconstituted ancient Sith Empire who rose to prominence in 3638 BBY and created much trouble for both the Republic and the Empire respectively.

Bannite Sith were a byproduct of the legacy of Darth Revan in Lehon - a development which had significant consequences for so many in the years to come.

The entire scene is a description of the power of Freedon Nadd's tomb, so the context directly concerns the Force.

@LadyKulvax wrote:The entire scene is a description of the power of Freedon Nadd's tomb, so the context directly concerns the Force.

What kind of power? Its corrupting influence?

"The stories say he was far worse than Revan and Malak ever were. This place is tainted, and a Sith presence here make the danger great." - Mandalorian

"The soldier is correct. The dark side is strong here, and it will grant its strength to the Sith." - Darth Traya

A tomb is not representative of one's powers in life. It is rather a monument dedicated to one's popularity (legacy) and corrupting influence.

No they aren't, they are generally reflective of one's power but Nadd takes it to an entirely new level:

Chronicles of the Old Republic wrote:After his death, Nadd's sarcophagus became the focus of dark-side energy, and enabled Nadd's descendants continue to battle their own people in a civil war.

Knights of the Old Republic II: The Sith Lords: Prima Official Game Guide wrote:Whether because you want to deny them Freedon Nadd's power or because you refuse to share it with anyone else, you have no choice but to fight.

Visas Marr, Knights of the Old Republic II: The Sith Lords wrote:I can taste the power of the dark side here. Freedon Nadd must have been truly great to leave such an impact. The echoes of his life are still here."

Brianna, Knights of the Old Republic II: The Sith Lords wrote:"I can sense the power from this place. It's like the light abandoned it long ago. I fear the Sith shall be very strong here."

Kreia, Knights of the Old Republic II: The Sith Lords wrote:"Freedon Nadd's power seems to have been underestimated, his legacy lives in the very stones of his resting place. Anyone attuned to the dark side would have a tremendous advantage here." 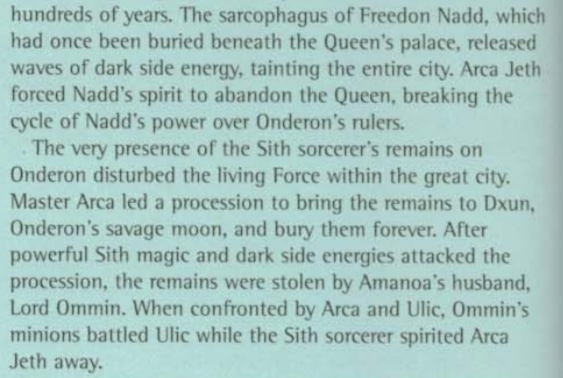 That is very nice connection of dots from you (credit where due). Yes, he was very powerful in life, and his corrupting influence after his death is testament to this fact.

But Darth Malak and Darth Revan do not have tombs of their own; each did not receive a burial. WE do not know what kind of mark these two would leave even in death.

Therefore, that Mandalorian and Darth Traya are offering a subjective assessment based on their exposure to corrupting influence of Freedon Nadd's tomb. These two never worked with Darth Malak and Darth Revan respectively, they have little idea.

Tomb of Naga Sadow was arguably the most impactful on Korriban. Yet, Revan would kick his @** in a fight. Probably Malak too.

1.This is irrelevant, the basis of comparison is between Freedon Nadd in life (and I imagine as a spirit before that died too) and Darths Revan and Malak in the context of explaining the power of Nadd's tomb. Something she reaffirms to be an understatement the further into the tomb she gets

2.Kreia is aware of Freedon Nadd's power and the powers of his predecessors, due to the holocrons gathered on Telos, and information confirmed to be accurate by Chris Avellone, the story's writer.

3.Kreia is fully aware of the potential of her star pupil and was quite aware of Darth Revan's power due to seeing his future 'even then you could see the Jedi he would slay etched on his soul.', having felt Revan's presence marked in the crystal caves of Dantooine, having subsumed herself in Malachor V for years, having seen Revan himself towards the end of the Mandalorian Wars and a plethora of other examples.

The comparison is solid and is fully in line with the rest of the story. Such as Ludo Kressh's tomb completely overwhelming a near prime KotOR 2 Exile, leaving the live Ludo Kressh to be far, far more powerful than her. Yet Ludo is at best close to Naga Sadow who is utterly dwarfed in power by Freedon Nadd prior to a century of power-growth and even maintains a massive demonstratable gap in spiritual form over a Naga Sadow massively empowered by a ship.

You can also factor in that the base Force power of Darth Nihilus is a magnitude above the rest of the KotOR era; an underestimation of the gap per the script, yet is also per the script only a 'rival' to 'some' of the ancient Sith. Freedon Nadd is canonically far, far above the ancient Sith besides Marka Ragnos and possibly Tulak Hord.

The entire game is full of one narrative, the ancient Sith are supreme and Nadd is no exception.

Requoting from our last discussion:

1.That's really beyond the point here, Kreia is saying the soldier is correct outright. The entirety of the Freedon Nadd's tomb mission is literally about the resurrection of the 'legendary tyrant' himself. You're acting as if Kreia has to be agreeing with only one portion instead of the whole. Yet further into the tomb she quite literally reaffirms her previous agreement by saying 'Freedon Nadd's power seems to have been underestimated, his legacy lives on in the very stones of his resting place.' She's not just saying that the soldier is right, but that what is believed about him was an underestimation specifically regarding his power and further repeats that this power is reflected in the tomb's very stones.

This could not possibly be a clearer context.

2.Playing the cut-content card with KOTOR 2 is itself a pretty under-handed counter and you know it. The scene was fully created. The ability to bring her with you was cut-out like many other pieces of content. This doesn't change what it means and you know that full well.

3.The Malak quote as we both know is hardly the ace in the hole that it's been portrayed as and the author of the article himself has stated which of our two interpretations is the 'definite' one.