This thread will be dedicated to the canon(ie. post-2014) version of Darth Vader! 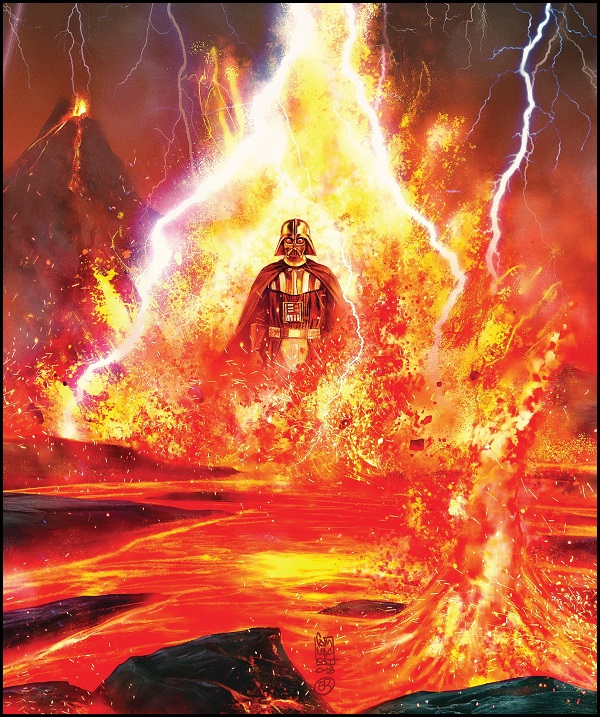 I will include feats primarily from the comics, and because all published material after 2014 is considered canon in the new system, I will also include some of his more noteworthy feats/accolades from the films, TV shows, guidebooks, and novels.


This thread will be divided into a few main categories:

Here are most of Vader's canon bios...


And in terms of Vader's placement in the Imperial hierarchy, he became second only to the Emperor himself in the chain of command:
https://i.ibb.co/fGQ5R0H/bio10.jpg
Palpatine: "This is Lord Vader. He speaks with my voice. A command from him is as a command from me."

A common misconception is that Vader's power/potential was nerfed after he sustained his injuries on Mustafar. However, in current canon Vader's power only increased after the events of RotS...

When man and machine were one, he no longer felt the absence of his legs or arms, the pain of his flesh, but the hate remained, and the rage still burned. Those, he never relinquished, and he never felt more connected to the Force than when his fury burned. With an effort of will, he commanded the onboard computer to link the primary respirator to the secondary, and to seal the helmet at the neck, encasing him fully. He was home.

-Lords of the Sith

Vader's increased connection to the Force is why he was also stated to be Palpatine's most powerful Sith apprentice by "light-years":
https://i.ibb.co/3zw30gW/power2.jpg
...Which puts him solidly above the likes of Dooku and Maul.


Moreover, Vader was stated to be the "most powerful Sith in the galaxy" in the Fallen Order tactical guide:
https://i.ibb.co/6HsKG1X/power.jpg


And Palpatine himself stated that Vader's power was "unparalleled":

Sidious softened his tone. "You are a true Sith, Lord Vader. Your dedication is unerring and your powers unparalleled."

As for Vader's potential...

Leland Chee(a member of the official Lucasfilm storygroup) has stated that grievous injuries, like those sustained by Maul and Vader, do not reduce a character's potential in canon:
https://i.ibb.co/5j5rz9Z/potential1.jpg

Aside from that, Vader's midi-chlorian count was still stated to be 20,000+, and the highest among Jedi/Sith:
https://i.ibb.co/TrdKBrS/potential2.jpg

And Paul Kemp(writer of Lords of the Sith) spoke a bit on Vader's potential as well:
https://i.ibb.co/nbrPj43/potential3.jpg


So by all accounts, his potential was not diminished after RotS -- even Palpatine was still "wary" of it.

With that established, lets move onward...

One of Vader's most commonly known powers is Force-choke. He has used this ability against an array of different opponents...


A member of the Rebellion:
https://i.ibb.co/SPjwtM5/choke9.jpg

However, Vader is obviously not limited to chokes. He also has some other impressive displays of general TK as well...


Uses TK to lift two AT-STs after they had fallen onto him:
https://i.ibb.co/r5T2kVS/force.gif


Uses a TK gesture to fling several Stormtroopers away:
https://i.ibb.co/sWZ6BZ7/fight16.jpg

And here are a few instances of Vader overtaking the minds of a few opponents...

Vader is canonically listed as the #1 red lightsaber wielder(above even Sidious himself):
https://i.ibb.co/CbqQwVG/skill.jpg


As such, Vader is easily one of the most skilled swordsmen(and overall most powerful beings) in the entire mythos. Here are some of his more noteworthy showings...

Even Maul as of Rebels states that he cannot defeat Vader alone:
https://i.ibb.co/bWXM6TB/1.jpg

*And keep in mind that as of TCW S07, at only 17 years old, Ahsoka was already in Maul's tier... And 15 years later(during Rebels), Ahsoka was stated to be "vastly more skilled" than she was during TCW:
https://i.ibb.co/m89L3V3/2.jpg
...Yet Vader still beat her decisively.

That being said, Vader does not require a lightsaber to block blaster fire -- he can do so with the Force alone. Examples...

Vader can also throw his lightsaber(Mjolnir-style) to take out ranged opponents...

*And for a point of reference, an X-Wing's in-atmosphere flight speed is 652mph:
https://i.ibb.co/7tr3GqY/throw9.jpg
...So that's one helluva throw.

Additionally, Vader can use Force-shielding to block certain attacks...


Shields himself from a flamethrower:
https://i.ibb.co/1b0PKSs/fight2.jpg


Shields himself from an explosion:
https://i.ibb.co/gPLh11f/shield5.jpg


In Jedi: Fallen Order, Vader is portrayed with a sense of absolute power. He shows up at the end and slaughters the Second Sister(who is absolutely terrified of him), gestures Cere Junda away with a casual wave of his hand, effortlessly 'catches' a turbine Cal was trying to throw on him, starts bringing down the entire room he and Cal are in, utterly demolishes Cal with the Force, walks through all of Cere's Force attacks, and then holds back the ocean water as it begins flooding the base:
https://www.youtube.com/watch?v=PGDJVqrT-mA&t=2m10s

It should go without saying, but Vader is an extremely gifted pilot as well...


In fact, Vader's pre-cog(which he calls "double vision") enabled him to successfully pilot a Star Destroyer through the Unknown Regions, while moving through hyperspace at FTL speeds:

Stretching out to the Force, Vader keyed the hyperdrive.
Double vision: a cometary object approaching the starboard bow--
Not seriously dangerous, but a tweak of the course heading avoided any potential trouble. Ahead, he sensed the boundary of the Mokivj system as the Chimaera once more entered interstellar space.
Double vision: a large, star-sized object above the ship--
Again, a small touch on the drive avoided the risk of collision. Two more stars flashed past, without triggering any warning.
Double vision: the ship angling to portside--
Vader let his mind sink deeper into the Force.
Double vision: the ship angling to portside--
He touched the controls again, realigning the Chimaera onto the vector in his vision. He'd never done this before, but it seemed he could indeed do it.
Double vision: a white dwarf star directly ahead--
Once again, he adjusted course, and settled in for the long journey ahead.

"I understood travel into the Unknown Regions was difficult."

"Indeed," Thrawn said. "The hyperlanes are few and not easy to traverse. But system jumps are possible if a traveler has sufficient time and is content with traversing limited distances."

"And if one was not content with limited distances?"

"One would need a careful study of the border," Thrawn said. "Millennia ago a set of chained supernova explosions throughout this particular region threw planet- and moonsized masses at high speeds across the stars. The movements of those masses continually alter the hyperlanes, changing the paths in ways that are difficult to calculate. Other phenomena in other parts of the border created similar barriers. The hyperlanes that remain largely intact are beset with other dangers."

Vader's armor is equipped with magnetic clamps that make it possible for him to stay attached to a ship's hull. His armor is also completely sealed, allowing him to survive in space otherwise unaided:
https://i.ibb.co/TvWcz95/misc1.jpg
https://i.ibb.co/w67TKqN/misc2.jpg

When it comes down to it, Vader's armor is immensely durable, and has considerable physical strength as well...


Just because it's a badass scene...

There are a few other tidbits I will probably add later, but that's about it for now...

Up. This was a colossal undertaking. You made an old Vader wanker proud

Interestingly enough, Vader did this without having a visual of the captain. All he had was radio communication.

Hadn't seen this before. Very nice.

Great thread my friend @Galan007 ! Love the effort and thought you put into this .

Nice respect thread if You need more info about canon vader pm me.

Vader deflects the blaster fire from a few freighters, before using TK to pull one out of the sky:

The freighters opened fire, writing thick lines of plasma onto the air. The shots churned the ground, destroyed trees, heated the air of the clearing; one slammed into the chest of a Royal Guard and vaporized all of him save for his helmet.

Lost in the Force, Vader anticipated the shots that would have hit him, saw the appropriate angles of impact and deflection, and used the rapid spinning of his lightsaber to turn first one, then a second, and then a third shot not into the tree line but back at the ships, the heat and energy of the blaster shots driving him backward, warming the hilt of his weapon, a heat he could feel even through his glove.

Vader lifted a hand and reached out with the Force toward the other ship. Vader enmeshed himself in the Force, in his seething, ever-present wrath, and used it to take hold of the freighter and drive the entire ship toward the ground. He grunted with the effort, his respirator increasing his rate of breathing to account for the exertion.

The ship, its damaged engines unable to compensate enough against the downward push of Vader's power, went nose-down and streaked into the ground. Vader imagined the screams of the pilots as they watched the forest race toward them. The ship disappeared behind the tree line and exploded into a fireball that reached above the forest's canopy and caused the ground to vibrate.


-Lords of the Sith 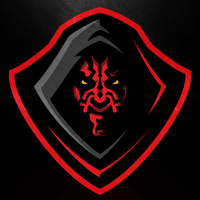 
In Vader Immortal (yes, it's canon as well), Vader uses TK to perfectly reconstruct the shattered statue of Lady Corvax, before destroying it again:
https://i.imgur.com/bYe5sTv.gif


*And prior to this, his armor was already slightly compromised:
https://i.imgur.com/XMY3AJJ.jpg


Just so everyone is aware, the Malachor superweapon was powered by a "giant kyber crystal":
https://i.imgur.com/oAyjNti.jpg

And in an earlier scene from Rebels, we also saw what the detonation of a giant kyber crystal was capable of:
https://i.imgur.com/C69RTK2.gif

Just some food for thought.

Apparently Vader is the first known being to ever solo the beast.

*Note in the fourth scan he palms close-range blaster fire, then TK chokes all of the Handmaidens simultaneously in the last scan.

Well done, I noticed Vader is often shitted on in this forum, hope people will understand how powerful he is now

Gianfi wrote:Well done, I noticed Vader is often shitted on in this forum, hope people will understand how powerful he is now

thats just legends this is canon vader which for some reason people on here dont like to debate becuase he is a top dog.

Message reputation : 100% (1 vote)
It's a shame though, such a waste of potential good debates just because they are stupidly biased against canon

You can debate using Canon Vader LOH. But then again you'd also call everyone retard or cringe for debating against Vader.

HellfireUnit wrote:You can debate using Canon Vader LOH. But then again you'd also call everyone retard or cringe for debating against Vader.