Sadly, but not unexpectedly, Curry cucked, depriving me of the opportunity to put the arguments I've found since the creation of my first post in the debate itself. But fear not! In this blog I'll reveal the blog equivalent of my highly anticipated second post. 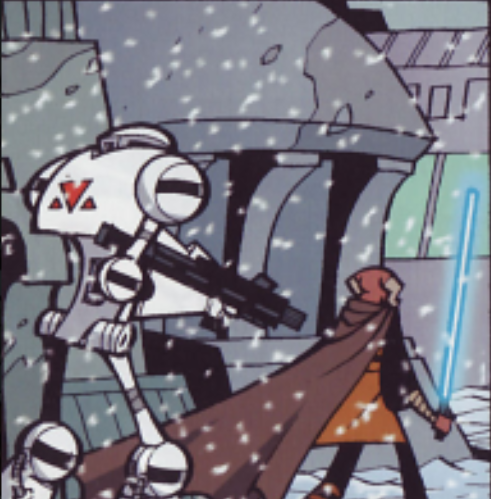 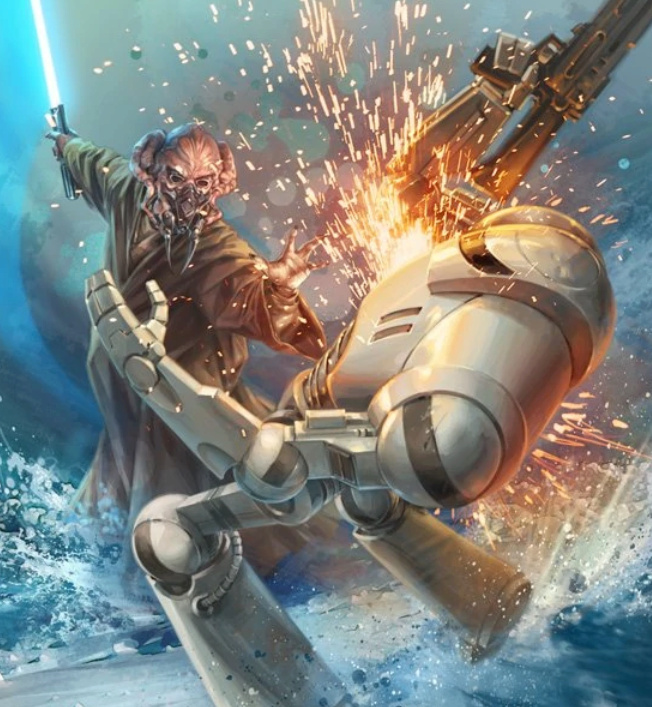 If Kit's superiority to Tiin weren't already evident from the consistency in his better performance against Palpatine in film, novel, and comic, here's a quote affirming that that was the intent while shooting the film.

Star Wars Chronicles: The Prequels wrote:Since the shooting script called for Kit Fisto to last longer than the other two Jedi who accompany Mace, a stunt performer was cast in the role of the Jedi warrior.

As though "Saesee wasn't trying his hardest" (Curry's go-to argument against this) weren't already a hilariously weak excuse, it's outright stated that he's not holding back in the game itself, in a manner that's, if anything, more explicit than Plo's equivalent quote. 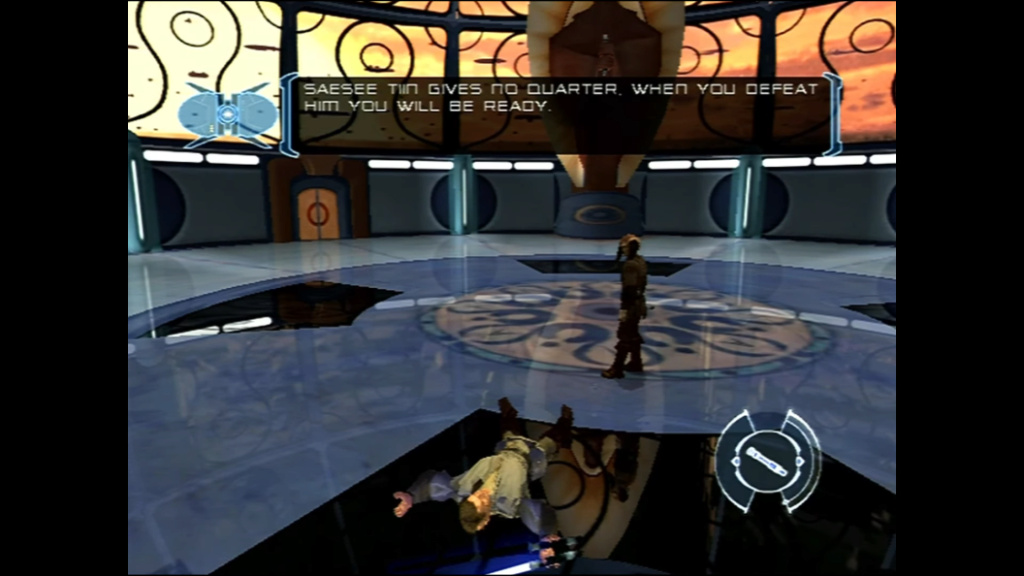 Mace selecting the B-team only because they were what was available, not because they're the best out of the entire order, is further supported by a quote from the Revenge of the Sith Visual Dictionary (written by James Luceno).

Revenge of the Sith Visual Dictionary wrote:Most of the Jedi are deployed on distant worlds, but Mace manages to assemble a trio of celebrated swordmasters to assist him in arresting Palpatine: Agen Kolar, a Zabrak known among the Jedi to strike first and ask questions later; Saesee Tiin, a solitary Iktotchi who has never chosen a Padawan learner; and Kit Fisto, Nautolan master of Form 1 lightsaber technique, who distinguished himself on Geonosis and Mon Calamari, and who partnered Mace in battling Grievous on Coruscant.

Plo Koon, as one of the Jedi "deployed on distant worlds", would be one such Jedi who Mace would have been incapable of assembling (a team organized, it should be noted, after Koon was away, not before).

Saesee's telepathy being relatively ineffective for combative purposes is supported by his species being stated to have difficulty being able to control their foresight abilities. 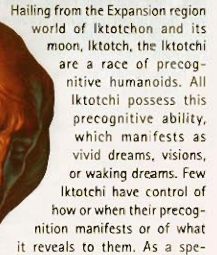 This statement is repeated in the New Essential Guide to Alien Species. Not only this, but Iktochi are said categorically to view the future as always in motion.

New Essential Guide to Alien Species wrote:Although both male and female Iktochi share the gift of clairvoyance, most have no control over when they receive these visions, and the responsibility assumed in becoming a trained Seer is great. It is only after deep consideration and consultation with elder Seers that Iktochi will elect to train as Seers themselves, and it is not uncommon for them to withdraw from the training once it has begun. Starting as young adults, Seers will spend years in meditative practice perfecting their control, to the point that they can enter a trance and summon insight into the future at will. Trained Seers do not do this lightly -- Iktochi feel, just as the Jedi do, that the future is always in motion and can be affected by current events and actions.

Which is important because the same source says that Kel Dor Jedi do not, and are superior in being able to see future events both near and far because of it.

New Essential Guide to Alien Species wrote:There have been cases recorded of Kel Dor Jedi communicating telepathically across great distances, perhaps even half the galaxy. They are rarely caught off guard, and unlike Jedi who view the future as always in motion, they can frequently pinpoint and predict immediate or even distant future events with incredible accuracy.

New Essential Guide to Alien Species also quite clearly had Plo Koon and Saesee Tiin specifically in mind. Besides Plo Koon being quite clearly the Kel Dor Jedi who telepathically communicated across "perhaps even half the galaxy" (Stark Hyperspace War), besides even the fact that both Plo and Saesee are the most well-known members of their respective species, TPM is listed as the notable appearance for both species... a film in which Plo is the only Kel Dor, and Saesee the only Iktochi.

The Empire Strikes Back wrote:[Yoda:] “Difficult to see. Always in motion is the future.”

Revenge of the Sith novelization wrote:"Yes. Always in motion, the future is." Yoda lifted his head and his eyes narrowed to thoughtful slits. "And the prophecy, misread it could have been."

Indeed, there's even a quote that assigns Yoda that philosophy while simultaneously restating its inherent hindrance.

Labyrinth of Evil wrote:Such mastery was one of the skills that distinguished Sidious from Yoda, who believed the future was so much in motion it could not be read with any clarity - - especially during times when the dark side was on the ascendant.

But how could Yoda be expected to see the whole picture with one eye closed?

In terms of authority, Plo is on even terms with Mace Windu as of Revenge of the Sith, and on a higher level than Tiin.

RotS Mace Windu is no longer the Master of the Order, as that title now belongs to Yoda.

Yoda: Dark Rendezvous wrote:The Clone Wars like a mighty hand had flung Jedi throughout the stars, leaving only a few senior Jedi Knights in the Temple at any time. Yoda, of course, as Master of the Order and military adviser to the Chancellor, was nearly always on Coruscant. 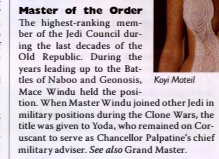 All his authority putting him higher than other members of the Jedi High Council lies in him being both a Jedi Council Member with a permanent place on the Jedi Council and being a Senior Councilor.

Plo Koon also has both of these in his favor, and they're backed up by the implications from the films.

Clone Wars Campaign Guide wrote:Following the Stark Hyperspace Wars, Plo Koon receives his promotion to Jedi Master and is offered a permanent seat on the Jedi High Council in honor of his Master’s dying wish. Although he feels that many others are more deserving, he nevertheless accepts the honor. 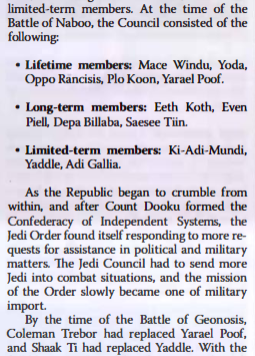 This is supported by the fact that he, Mace, Yoda, and Ki-Adi-Mundi are the only four Jedi Council members to remain in the same seats on the Council throughout all three films in the Prequel Trilogy.

Mysteries of the Jedi wrote:Plo Koon is a senior member of the Jedi Council. This stern Jedi Master is known for making fast decisions. Plo's ability to act quickly makes him both a fierce warrior and a fearsome starship pilot.

Revenge of the Sith novelization wrote:He moved slowly into the center of the circle of brown-toned carpet, and turned toward the Senior Members.

Yoda was unreadable as always, his rumpled features composed in a mask of serene contemplation.

Mace Windu could have been carved from stone.

Ghost-images of Ki-Adi-Mundi and Plo Koon hovered a centimeter above their Council seats, maintained by the seats' internal holoprojectors. Agen Kolar sat alone, between the empty chairs belonging to Shaak Ti and Stass Allie.

Obi-Wan sat in the chair that once had belonged to Oppo Rancisis, looking pensive. Even worried.

Attack of the Clones junior novelization wrote:Yoda approved of the windows, but the rest failed to impress him. Earned it, the Chancellor certainly had -- no one could say he had not worked hard for the Republic and for peace. But Jedi preferred simpler surroundings, though none of the senior members of the Jedi Council who had come to discuss the situation with Chancellor Palpatine would ever have said so. The luxury made Yoda's ears twitch.

"I don't know how much longer I can hold off the vote, my friends," the Chancellor told the four Jedi facing him. His soft voice sounded tired. "More and more star systems are joining the Separatists."

The senior members in the latest quote, at Palpatine's office, are Yoda himself, Mace Windu, Ki-Adi-Mundi, and Plo Koon. Which, funnily enough, is the film's implication of their superior status over the others, as we know that all twelve Councilors were onplanet at the time, yet only those four were selected to meet with Palpatine.

Also funnily enough, it's the basis for a supremacy quote for those four as both the highest ranking and as the greatest. 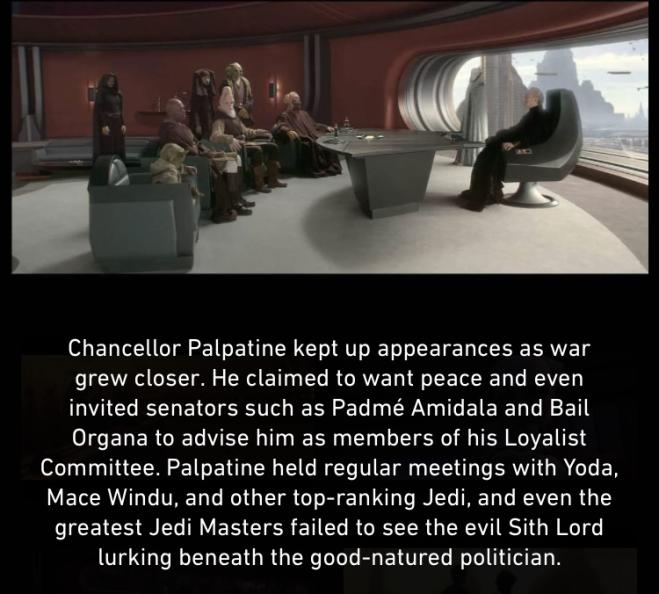 Yoda, Mace Windu, and Plo Koon are permanent-seat Council members in all the PT films.

Plo Koon is repeated several times to be a Senior Council Member, along with Yoda, Mace, and Mundi... the three Councilors besides Kenobi who get speaking roles in the films while seated on the Council.

Yoda, Mace Windu, Ki-Adi-Mundi, and Plo Koon are the four to meet with Palpatine when the entire Council is onworld.

Plo is undoubtedly of higher rank than Tiin, which, as Tiin has been around longer, implying that Koon is simply better.

Plo is also of the same rank as Mace as of RotS, which means that classifying him as one of "Mace's" Jedi would be incorrect.