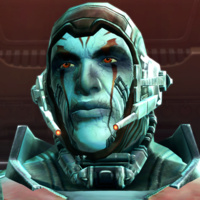 Adraas was capable of creating lightning that sent him flying leaving his armor charred after Malgus flung it back at him.

He smashes the Jedi temple floor.

Kas'im is a Jedi Master level adept who has a modicum of parity with PoD Bane who is above Kopecz whose lightning is above Plo Koon's.

He fell to the dark side though did not accept it enough to get Sith eyes and a large boost that comes with those. He'd be a tier 6.5 with Dooku.

Lord Adraas is a Lord, as a Lord you 'tower over' the rest of the Sith which includes Harkun who has >Plo Koon level lightning.