@Azronger @DarthAnt66 Just checking, but as a final decision, is the 5% rule coming into play? 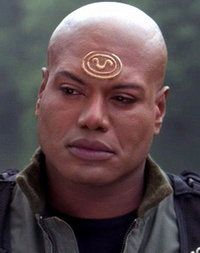 If there's going to be a thing against troll posts, there should also be a minimum for a number of thread posts. I've noticed several users who have voted so far have either only posted in a single thread or haven't posted at all before.

I vote Revan. As the tie breaker, let's put this to rest.

Not saying they're socks, lol. I'm saying it's unusual that some people who registered months ago yet never posted/posted only once have suddenly surfaced to make one post in a tiering tournament then vanished again.

i think everybody can vote. why can they NOT vote? i like to be a fair, unbiased person, so dont think im saying this just to get the revan votes, but i wouldnt complain if they were voting for plagueis either

Excellent arguments, especially by Ant, but not groundbreaking enough to change my mind. Plagueis takes it in a nice battle

Will read prior arguments and vote accordingly.

Revan's arguments had the least holes in them, so him.

Message reputation : 100% (4 votes)
Since the deadline was extended for @xolthol, I asked Ant if arguments could still be made and he said yes, so here goes the midi-chlorian manipulation argument.

DarthAnt66 wrote:Offensive midichlorian manipulation is suspect at best, not a thing at worse. Consider these three quotes from Plagueis:

(1) "Midichlorians also appear to possess a single unified consciousness linked via the pneuma and can be influenced by the host's mental state."

(2) "[One can] impose one's will on the midichlorians already present in the subject through the energy of the pneuma."

(3) "I used my will, amplified through my body's own midichlorians, to override the lesser concentrated midichlorian voices in the test subjects."

To provide everyone with some context, Darth Plagueis divided the Force into three distinct aspects in his writings: the aperion, physical reality; the pneuma, consciousness; and the anima, life: 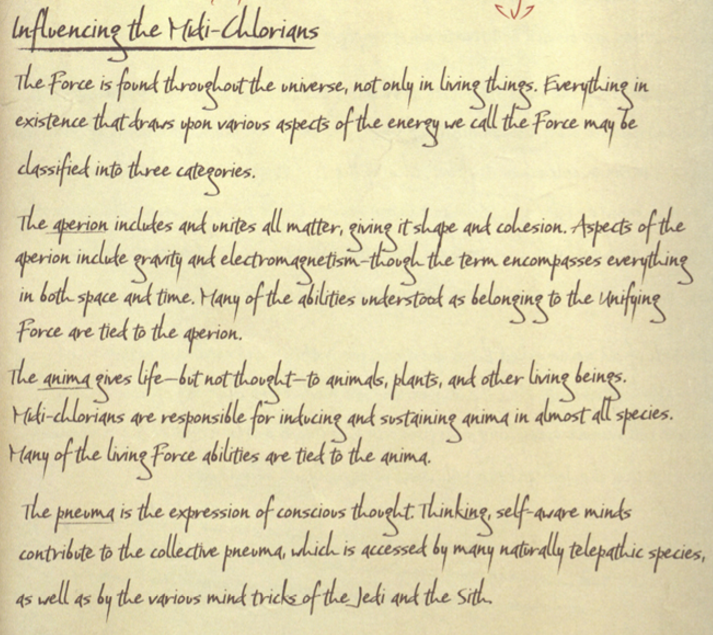 Of interest to many may be the "collective pneuma" Plagueis referenced. That is how telepathy works, essentially: one accesses the collective consciousness of the universe (the Cosmic Force), and thus they are able to affect the pneuma of other beings. This is also how midi-chlorian manipulation functions: 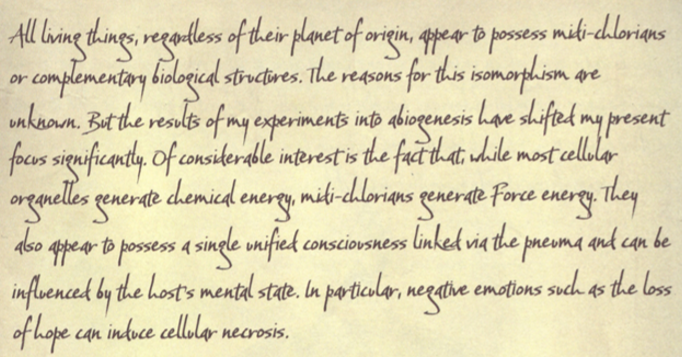 Here is where Ant erred and misinterpreted things, however. Yes, midi-chlorian's can be influenced by the host's mental state, but that is only because the host and the midi-chlorians exist in symbiosis - they have a Force bond, so to speak. Indeed, midi-chlorians are not "part" of the host in the sense that they are individual organisms with their own, separate consciousness that simply happens to be housed in a larger organism. This is obvious, really, if recalls the lore's introduction to midi-chlorians: Qui-Gon Jinn explains how ordinary beings would have no knowledge of the Force if not for the midi-chlorians speaking and informing of its will to the host.

Then, the conclusion that influencing midi-chlorians comes down to the host's willpower is simply a leap in logic that's not supported. Midi-chlorians are independent entities that share an intrinsic bond with the host, but since when has telepathically influencing a Force-bonded character required influencing everyone connected to the bond? When Kreia mentally fucked with Atton, the Exile's own will isn't part of the equation at all despite both of Kreia's victims being Force-bonded to her and her mental state influencing Atton constantly. And just like the Exile isn't aware of what Kreia is doing to Atton in the slightest, most beings cannot even perceive midi-chlorians - it took Plagueis decades to even begin sensing them in his cells, and most Jedi still require technological devices to get a read on someone's midi-chlorian count while Banite Sith evolved to do this just with their Force sense. It's honestly the perfect analogy: just think of Atton as the midi-chlorians and the Exile as the host, and you get the picture. 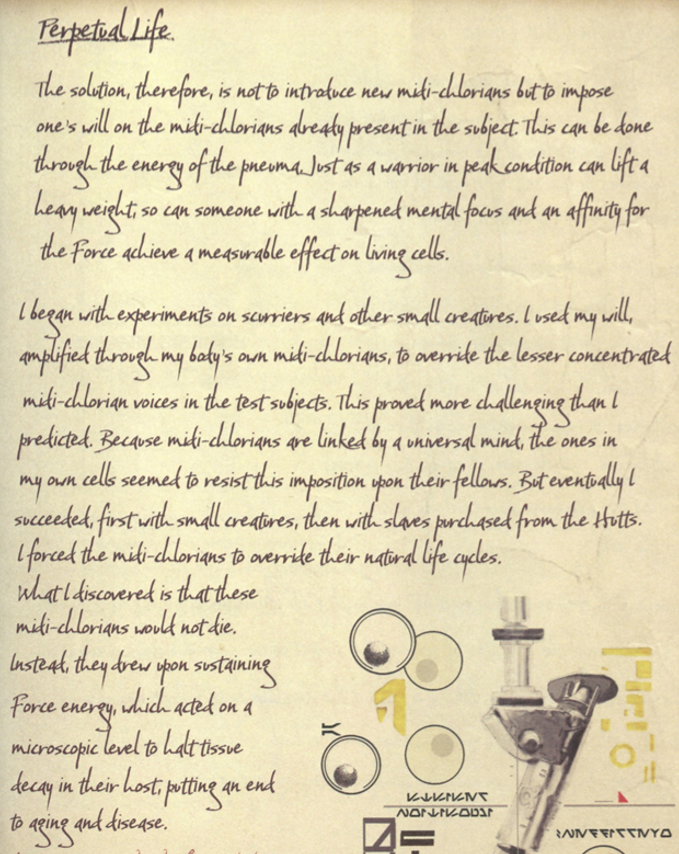 So, then, what basis is there to say that one's willpower matters? Really, what basis? All this seemed to simply be a mishap on Ant's part when reading the text.

DarthAnt66 wrote:Seperate from that, offensive midichlorian manipulation is just sever Force: "To sever the Force is to trigger a mass die-off a victim's midichlorians--not enough to kill but enough to take a Jedi's power. It could be that the Jedi of old knew this feat, but if so they did not understand its underpinnings. Severing the Force is the inverse of what I have done when inducing midichlorians to create life." Note Daniel Wallace's Book of Sith endnotes on starwars.com confirm Plagueis' suspicion that it's the same ability the Tales of the Jedi Jedi use: "This removes a Jedi’s ability to use the Force, and was introduced in the Tales of the Jedi comics during the 1990s. Given what we’ve learned of the Force since then, I added the detail that this works by triggering a mass die-off of the subject’s midi-chlorians." That follows as the Jedi tried to kill Kun with the attack, and Droma was permanently severed (him merging with the Force upon his death doesn't preclude that, as that should be hypothetically possible for even non-Force sensitives). The only difference being the ancients didn't "understand its underpinnings," but they didn't need to be in order to defend against it though. Again, willpower's the logical counter, as Plagueis effectively stated earlier, as it's something the ancients could use without needing to understand the midichlorian meta.

I'll again reprimand Ant for trying to argue the DK books are a separate continuity and thus unusable and then making use of an author quote, which is not part of any continuity.

Regardless, even if you wish to use Wallace, the end result being the same does not necessitate the mechanism being identical. In Tales of the Jedi, the Jedi would bathe the victim in light side energy; they did not come into direct contact with the midi-chlorians. It's the light energy that would eventually kill off the midi-chlorians, but as Odan-Urr notes, this doesn't always happen if the Jedi so chooses (his comments about the permanence being voluntary), and we have an example of this with the Jedi Exile again, who regained her connection to the Force after severing it on Malachor V; she obviously didn't get new midi-chlorians. With the wall of light variant, you can resist it by resisting the light side energy, but what Plagueis does is directly tap into the midi-chlorians; there is no defense against it unless the target knows how to communicate and influence his own midi-chlorians to fight back, which is not the case with Malgus. 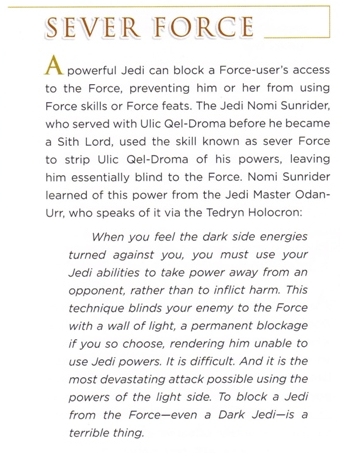 This all also explains why Plagueis didn't try to trigger an offensive midichlorian die-off against Palpatine, who he didn't know was that advanced in the practice.

No, Plagueis didn't try anything because at first he was courting death and challenging Sidious to throw everything at him to prove he was unkillable; he had no interest in retaliating. Only later when he did realize he was actually suffocating and the Force leaving his body, did he attempt to attack Sidious, but he was too weak by that point.

Crackling from his fingertips, a web of blue lightning ground itself on the Muun’s breathing device. Plagueis’s eyes snapped open, the Force gathering in him like a storm, but he stopped short of defending himself. This being who had survived assassinations and killed countless opponents merely gazed at Sidious, until it struck him that Plagueis was challenging him! Confident that he couldn’t be killed, and in denial that he was slowly suffocating, he might have been simply experimenting with himself, actually courting death to put it in its place. Momentarily taken aback, Sidious stood absolutely still. Was Plagueis so self-deluded as to believe that he had achieved immortality?

The question lingered for only a moment, then Sidious unleashed another tangle of lightning, drawing more deeply on the dark side than he ever had.

Star Wars: Darth Plagueis
Sidious peered at Plagueis through the Force. “Oh, yes, by all means gather your midi-chlorians, Plagueis.” He held his thumb and forefinger close together. “Try to keep yourself alive while I choke the life out of you.”

Plagueis gulped for air and lifted an arm toward him.

“There’s the rub, you see,” Sidious said in a philosophical tone. “All the ones you experimented on, killed, and brought back to life … They were little more than toys. Now, though, you get to experience it from their side, and look what you discover: in a body that is being denied air, in which even the Force is failing, your own midi-chlorians can’t accomplish what you’re asking of them.”

Star Wars: Darth Plagueis
So, as far as hax goes, Plagueis pulls ahead by a country mile. Even were Ant's theory true, Malgus's willpower has never been indicated to be in the same stratosphere as Plagueis's. Note that while he may get an amp in power, this does not extend to his other attributes. Although usually willpower informs Force power, the converse is not necessarily true and it is possible for a very powerful being to be undisciplined and weak-willed - therefore giving Malgus an amp in power does not make him safe from Plagueis tampering with his midi-chlorians. And since Ant's theory explicitly isn't true, the fight would be even more lopsided. Malgus would require an utterly humongous amplification, far beyond Plagueis's own power, to be able to kill him before Plagueis commands his midi-chlorians to meld back into the Force, a process which Plagueis can expedite by force. On top of being much weaker overall, Revan's hax doesn't come anywhere close in utility. Plagueis deserves the number 8 spot over him any day.
_________________

Pretty funny how bunch of scientists in Harvard are on the brink of replicating ever lasting life in human trials, yet in a spaced age Galactic Civilisation with a high council of wizards, the secret was exclusive to Plagues only after 1000 years of accumulating research.

Message reputation : 100% (6 votes)
It take me a pretty long time to go through all of this debate (15 pages

First I want to congratulate both @Azronger @DarthAnt66 and @The Ellimist (and the other for their smaller participation)for their awesome work. I really enjoyed this fight (same level than Krayt vs KF Vader).

My vote goes for Darth Plagueis.

Really ought to be Mace or Starkiller next

Isn’t there a 55% rule in place? Or is ant lifting it for Plagueis lol.

place 9 is for either mace,outlander or sk