Message reputation : 100% (1 vote)
There are some interesting parallels between Anakin and Abeloth that make them in some sense the antithesis of each other.

Anakin is meant to bring Balance to the Force, whereas Abeloth is the bringer of Chaos.

Anakin was created by the Force itself, whereas Abeloth was created as a product of the Celestial's temptation towards their own desires (if you take Supernatural Encounters as Legends, Wutzek is the progenitor of the Old Ones out of his own vanity, and if you don't, then a Legends article suggests Abeloth was created by the Ones out of a desire for companionship that went completely awry in the end). So you can draw a contrast between Anakin being created naturally of the Force's own will, and Abeloth being created by the Celestials somewhat in defiance to the natural order of things.

Then of course there is the nature of their failures in relation to the ones, which are again antithetical. Abeloth's transgression was in her claiming power the Father had forbidden her. By contrast, Anakin's failure was in his refusal to claim power the Father had offered him.

Then you have the nature of their falls. Abeloth fall involved the Father (her lover) refusing to save her from her own mortality and her taking things into her own hands. In Anakin's fall by contrast the roles and actions were reversed. Anakin fell because he refused to refuse to go to any lengths to save Padme, his lover.

Then you have their family relationships. Abeloth's children spurned her, whereas Luke ultimately risked his own life to try and redeem Anakin.


Just some interesting narrative parallels between the two. 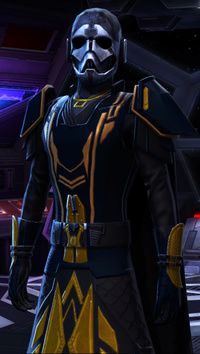 Hmm, never actually thought about it that way. They are the antithesis to each other.

Well, Anakin was basically a potential successor to the Father, whom we know was the antithesis of Abeloth.