"Young master, have you heard the tale of the Jedi Master Murrtaggh and the Dark Underlord?" 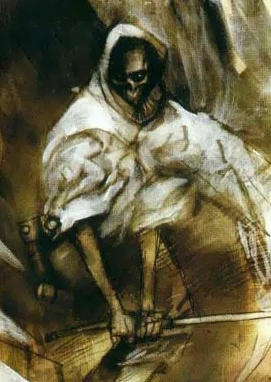 The Dark Underlord, an undead entity of sorts, was a reigning Sith Lord during the Draggulch Period. He formed and led the Black Knights, which were a band of Sith based on Malrev IV. Described as being a dark side spirit released from the depths of Hell by a rogue Sith Acolyte, Dark Underlord is an incredibly mysterious figure, and an interesting one at that. There is little about him, but I made an entire RT for him in the reasonable chance that his identity is revealed in the upcoming Supernatural Encounters. Perhaps he truly is the legendary General Xendor of the First Dark Jedi.

The Dark Underlord was a warlord:

Legends describe The Dark Underlord as being either a Sith spirit conjured from the Chaos Realm by a Sith Acolyte who disappeared, or being the spirit of the legendary Dark Jedi Xendor:

Star Wars: The Complete Encyclopedia wrote:Conflicting legends of the Dark Underlord's origins describe him as an avatar of General Xendor's spirit that had possessed a follower, or as a being magically summoned from the realm of Chaos by a Sith acolyte.

Evil Never Dies: The Sith Dynasties wrote:Some said he was called from the realm of Chaos by an inexperienced Sith acolyte who was never heard from again.

Evil Never Dies: The Sith Dynasties wrote:Others even speculated that the Dark Underlord was the spirit of the Lettow general Xendor himself.

Underlord is somewhat intangible since he is a dark side spirit:

The Emperor's Pawns Endnotes, Part 3 wrote:My original idea was that the character, who originally appeared in a sort of insubstantial form, was not merely employing a holographic-style disguise but that Blackhole was literally a ghostly apparition, a dark side spirit from beyond death. Though the idea was rejected, it was recently repackaged in a more ambiguous form for my project Evil Never Dies: The Sith Dynasties (2006, StarWars.com) as the background for the Sith known as the Dark Underlord.

Evil Never Dies: The Sith Dynasties wrote:Chaos largely reigned for the next 250 years until a powerful Sith leader emerged. Known only as the Dark Underlord, his presence was clouded with rumor and Sith folklore.

Dark Underlord formed and led a group of Sith called the Black Knights:

Star Wars: The Complete Encyclopedia wrote:The Dark Underlord led a fighting force known as the Black Knights of Malrev IV in a devastating scourge of the Republic and the Jedi.

Dark Underlord and his troops assaulted space stations on the Zona Miki route:

Star Wars: The Essential Atlas wrote:By 1750 BBY, rule of the Sith had fallen to the emotionless Dark Underlord, whose black knights assailed space stations along the Zona Miki route.

Whilst dying to Jedi Master Murrtaggh, the Jedi was, somehow, immediately subdued by the dark side:

Evil Never Dies: The Sith Dynasties wrote:While the Dark Underlord's Zeltron commander faced the Mandalorian intruders, Master Murrtaggh stole into his enemy's territory and assassinated the Sith Lord, martyring himself to the dark side in the process.

Dark Underlord was a marauder, and an incredibly bloodthirsty one at that:

Evil Never Dies: The Sith Dynasties wrote:The only thing that was certain was that he was a bloody marauder of the first quarter of the New Sith Wars.

Abel G. Peña wrote:As such, the DU got Belia's line:

"...he was a bloody marauder of the first quarter of the New Sith Wars."

Dark side marauders are warriors:

The Dark Side Sourcebook wrote:Warriors who discover in themselves an ability to wield the Force can become dark side marauders.

Marauders are considered living weapons of the dark side:

The Dark Side Sourcebook wrote:Without the mental disciplines and strict code of conduct the Jedi Order provides, these warriors become brutal, living weapons, delighting in inflicting pain and taking lives. The dark side marauder becomes an extension of the dark side of the Force in the same way that her weapons are an extension of her body.

Dark side marauders are the ultimate mercenaries:

The Dark Side Sourcebook wrote:Dark side marauders are the ultimate mercenaries. Adventure, pillage, slaughter, and violence define them.

Dark side marauders combine physical prowess with force abilities and are similar to Jedi guardians in this way:

The Dark Side Sourcebook wrote:Like Jedi guardians, dark side marauders combine physical prowess with training in the Force. Unlike Jedi, they bend it to their own violent purposes.

The Dark Side Sourcebook wrote:Dark side marauders combine the best aspects of the soldier and the Jedi guardian, mixing a well rounded complement of fighting tools with the ability to wield the Force.

Marauders are reliant on their strength in the dark side:

The Dark Side Sourcebook wrote:She lives in a world where her destiny is entirely dependent on her mastery of her weapons and her strength in the Force. The dark side makes her survival far more likely.

Marauders love the feeling of the dark side filling them, as well as the exhilarating feeling of battle:

The Dark Side Sourcebook wrote:They often live for the joy of battle, the test of arms, and the tempering that only bloody conflict can provide-but they are hardly above taking pleasure in the spoils that victory provides. While the adrenaline rush of combat is a heady drug to them, the thrill of the dark side flowing through their
veins is far more intoxicating. To feel that thrill again and again, the dark side marauder seeks out any activity that lets her wield the Force against an opponent.

Marauders are very qualified for jobs that require extensive combat knowledge and abilities:

Dark Underlord utilized a pair of Sith Swords as opposed to lightsabers:

Dark Forces Saga, Part 4 wrote:Though Jedi and Sith since those early times have taken to substituting laser swords in place of steel ones, the ancient Jedi Awdrysta Pina favored dual Jedi Katana, while the Dark Underlord insisted on using twin Sith Swords despite being outmoded by the time of the New Sith Wars.

Dark Underlord was suggested to be a master of Jar’kai:

Star Wars: The Complete Encyclopedia wrote:He was a master of Jar'Kai combat, preferring to use paired Sith swords rather than more modern lightsabers.

Dark Underlord was one of the few Sith Lords powerful enough to hold a candle to the Jedi, and he personally led the Black Knights through battles that were devastating for the Republic:

Evil Never Dies: The Sith Dynasties wrote:Consolidating a large Sith group known as the Black Knights on the planetoid Malrev 4, the Dark Underlord was one of the few Sith powerful enough to actively take the battle to the Jedi during this era, hacking through battlefields with his twin Sith swords.

Message reputation : 100% (1 vote)
A lot of people will think this is nothing but I know how well researched this is just looking at the source titles, very well done. Got a star from me.

LadyKulvax wrote:A lot of people will think this is nothing but I know how well researched this is just looking at the source titles, very well done. Got a star from me.

agreed. very interesting character that finally got something to his name.