There is no passion…there is solely obsession.

There is no knowledge. There is solely conviction.

There is no purpose. There is solely will.


Darth Ruin is a Dark Lord of the Sith that kickstarted the Draggulch Period. Phanius was a man of philosophical interests, and did not withhold his dark side convictions from making his extreme ideologies even more radical. These beliefs are based on the Cartesian view of assured existence, which suggests that an individual knows that one can know that he/she is existent because he/she can think and psychologically experience the external world; this ideology also implies that one can not know if the figures around him/her are real or not since one cannot verify whether or not others can think because they are not the observer. This idea was later called solipsism. The lack of proof of another’s true existence combined with the self-absorbed mentality that was Darth Ruin truly makes for an incredibly interesting character that paints a picture like no other in the Star Wars mythos. 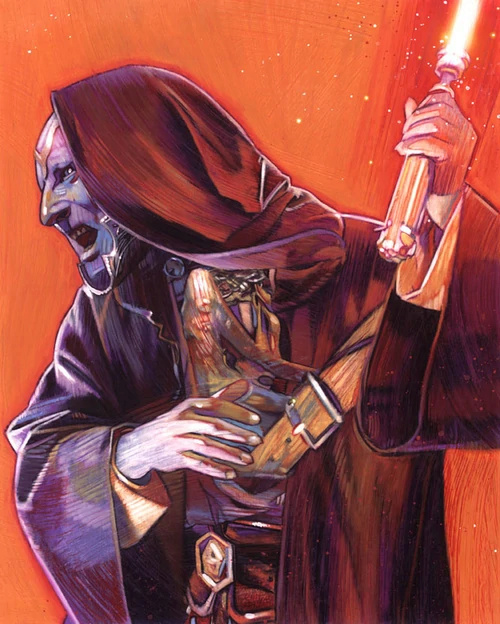 Darth Bane considered the title of “Darth to be a title of power and mastery, and those whom held it helped invent its definition through their impressive accomplishments; this speaks well of Ruin considering that Bane singled him out specifically:

Book of Sith - Secrets from the Dark Side wrote:It is no accident that I took the title of Darth when I gained a mastery of the dark side, nor is it an accident that Kaan and his followers rejected it. It is a title of power.

-Book of Sith - Secrets from the Dark Side wrote:Lord Kaan preached that all were equal in the Brotherhood of Darkness, but he did not dare to appoint a thousand Darths. In fact, he did not permit the use of the title at all. Perhaps he sensed its inherent power—that an individual who held the title would not allow rivals to live.

Book of Sith - Secrets from the Dark Side wrote:But the word’s true meaning does not come from any language but from the proud histories and accomplishments of those who have born the title: Darth Ruin, who left the Jedi Order to pursue his monomaniacal philosophy of self-interest and gave rise to the thousand-year war that concluded at Ruusan, and who was among the last to hold the Darth title—until I took it up again.

Abel Pena considers him to be incredibly evil, and likely far more so than the average Sith:

Abel G. Peña wrote:"Ruin is the definition of pure evil, as I conceive of him and it.”

Evil Never Dies: The Sith Dynasties wrote:Known by the name Phanius and believed to be an Umbaran, the pale-skinned man was a charismatic and gifted Jedi Master who exhibited hints of a disturbingly relativistic, some said solipsistic, morality.

Jedi vs Sith: The Essential Guide to the Force - Tionne Solusar wrote:Records list Phanius among the first of the Lost, a roster of Jedi Masters who abandoned the Order and eventually—after the abdication of Jedi Master Count Dooku—became referred to as the Lost Twenty.

Darth Ruin was incredibly confident, and so much so that he never saw his assassination as a possibility:

Jedi vs Sith: The Essential Guide to the Force - Tionne Solusar wrote:Evidently, his confidence blinded him to the possibility of being assassinated by his own Sith acolytes.

Darth Ruin was charismatic and intelligent:

The Complete Star Wars Encyclopedia: Volume 3 wrote:Two thousand years before the eruption of the Clone Wars, an intelligent and charismatic Jedi named Phanius renounced his oath and abandoned the Order to pursue prohibited teachings.

Darth Ruin declared himself as he Dark Lord of the Sith, and was seemingly not met with retaliation; thus, likely placing Ruin above all existing Sith at the given time:

The Complete Star Wars Encyclopedia: Volume 3 wrote:Recruiting scores of Jedi and others strong in the Force, he was seduced by the dark side and declared himself a Dark Lord of the Sith named Darth Ruin.

A noticeable amount of Jedi joined Darth Ruin (Peña suggested that it was about 50):

Only Sith Deal IN Absolutes! wrote:There he was described as a male Jedi Knight who left the order 2,000 years before the events of Episode I, taking 50 or so Jedi with him.

Evil Never Dies: The Sith Dynasties wrote:A number of Jedi joined his Sith cause, and war with the Jedi brotherhood inevitably followed.

Jedi vs. Sith: The Essential Guide to the Force - Bodo Baas wrote:A mysterious figure who may have been an Umbaran, Darth Ruin revived the
Sith Order and seduced a number of Jedi to his cause.

The Complete Star Wars Encyclopedia: Volume 3 wrote:Recruiting scores of Jedi and others strong in the Force, he was seduced by the dark side and declared himself a Dark Lord of the Sith named Darth Ruin.

Ruin was able to unite the lingering Sith clans under his rule:

Jedi vs. Sith: The Essential Guide to the Force - Tionne Solusar wrote:Unknown to the Jedi Order of the Old Republic, Phanius infiltrated and united various lingering Sith clans, then changed his name to Darth Ruin.

Darth Ruin was merciless and directed events that killed off many of his followers:

Jedi vs. Sith: The Essential Guide to the Force - Tionne Solusar wrote:A merciless leader with supremely self-centered philosophies, Ruin was known for whims that resulted in countless deaths of his own minions.

Phanius fell to the dark side through rationally considering the doctrines that came with being a Jedi:

Only Sith Deal In Absolutes! wrote:First, I eschewed the played out young, dumb Jedi who falls to the dark side angle for the Dooku-esque mold: the thinking Jedi Master who "wisely" turns to evil.

Darth Ruin, when he was a Jedi, stole an important Sith Holocron when he fled from the Jedi Order, and, with its knowledge, created a new Sith order:

The Dark Side Sourcebook wrote:One such student was a rogue Jedi who absconded from the Jedi temple with a rare Sith holocron. Armed with its corrupt knowledge, this Jedi founded a new order of Sith, who flourished over the next thousand Years.

Jedi vs. Sith: The Essential Guide to the Force - Tionne Solusar wrote:A charismatic Jedi of his time, Phanius abandoned the Jedi Order to pursue prohibited teachings.

Evil Never Dies: The Sith Dynasties wrote:He became one of "The Lost" when he abandoned the Jedi Order to pursue "alternative" knowledge.