I still don't see a reason not to buy it. That's like saying:

If we buy that the Earth is round

If we don't buy the Earth is round

@Master Azronger wrote:I still don't see a reason not to buy it. That's like saying:

If we buy that the Earth is round

If we don't buy the Earth is round

[size=34]I am not sure how a vocal mask can be related to mean having more power in terms of fleet/ships but yeah.[/size]

Yes, you've hit the crux of the issue. The mask being a possible source of Malak's newfound power restricts the context of the quote to personal power.

Message reputation : 100% (1 vote)
Also the fact that later on in the article it clearly states "Enhanced Force Powers -- Using a mysterious power source as yet undiscovered (complete Star Wars: Knights of the Old Republic to learn more), Darth Malak possesses extraordinary dark side Force powers out of proportion." It's been a clear-cut case since day 1 all those years ago. There has not been a single argument to the contrary that's even slightly convincing. Why some people refuse to accept it is beyond me.
_________________ 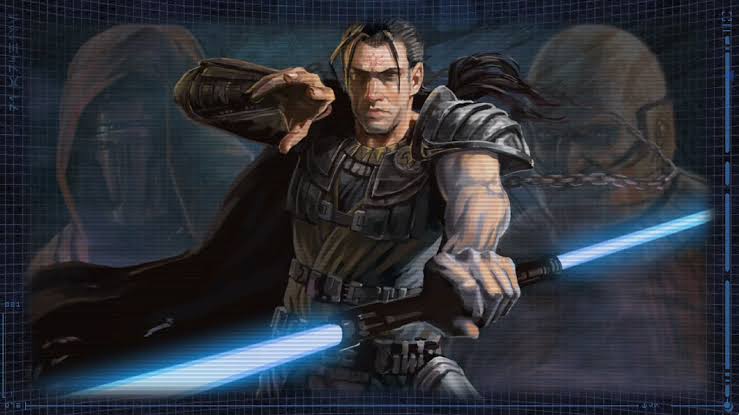 A quote exists stating that Darth Malak had been provided far greater powers than even Freedon Nadd or Exar Kun: 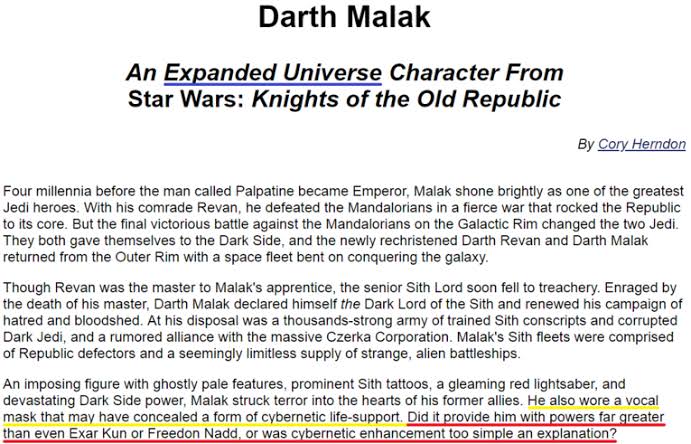 Now, whilst the context and interpretations of the quote can be debated. This is no longer needed as a more up-to-date source has confirmed that the interpretation of this quote so as to mean Darth Malak is far more powerful than Exar Kun cannot be accurate:


Kun, Exar. Once the most powerful and dangerous of the Dark Lords of the Sith, he was responsible for the deaths of millions four millennia before the Rise of the Empire.

This quote is from The Complete Star Wars Encyclopedia which is an in-universe omniscient source as stated within the text itself:

Star Wars the Old Republic: Encyclopedia wrote:Over 300 years ago, the great Jedi heroes Revan and Malak stumbled upon long-hidden Sith Empire's capital of Dromund Kaas, and its ruler - a mysterious, almost godlike avatar of the dark side. They argued briefly over whether to alert the Republic and Jedi Council, but Revan was already too consumed by arrogance and anger to consider the possibility of defeat. By the time Revan and Malak approached the Emperor in his throne room, they were already at the precipice of the dark side. It took only a fraction of the Emperor's loathsome power to complete their fall. The Jedi succumbed utterly to the Sith leader's domination and returned to the Republic to spark a new conflict: the Jedi Civil War.

Star Wars the Old Republic: Encyclopedia wrote:The legendary Jedi Revan and Malak confront the Sith Emperor in his throne room on Dromund Kaas. In mere moments, the Jedi lay defeated and consumed by the dark side of the Force

Revan and Malak Fall Codex Entry wrote:Realizing this Empire was the true threat to the Republic, Revan and Malak faced the Sith Emperor himself, intending to cut off the serpent's head--but the Emperor was too powerful. Overwhelmed by the Emperor's dark presence, they pledged themselves to his service.

Furthermore, Revan states that he doubts he could defeat the Emperor he faced with Malak despite his power growth since then, further stating that the Emperor at that point wielded a kind of power that not even Darth Malak amplified by the Star Forge had:

Star Wars the Old Republic: Revan wrote:As they drew closer to the throne room, Revan’s thoughts drifted back to his last confrontation with the Emperor. In all his battles, he had never faced an enemy with that kind of power. The dark side had radiated from him in palpable waves, his physical shell barely able to contain the crackling energy.

In their last meeting he had overwhelmed Revan completely; it wasn’t even fair to call it a battle. Revan had grown since then. He was far more powerful now, but was he a match for the Emperor?

What this means is that the Emperor as of 3960BBY required only a 'fraction' of his power to dominate Revan and Malak combined, and a Revan who at this point was much more powerful than Star Forge Malak still didn't think he could defeat the Emperor he'd faced in 3960BBY.

The question then becomes whether or not Vitiate surpassed Exar Kun in the 36 years after Kun's defeat. Well between 3960BBY and 3950BBY, there's no major growth in power on the Sith Emperor's part. The chronological gap between Exar Kun at his height and the Sith Emperor is only 26 years longer than that.

The reconciliation to this issue is that assumptions made regarding the context of the quote are wrong. The 'Did it provide him with powers far greater than even Freedon Nadd or Exar Kun or was cybernetic enhancement too simple an explanation?' line can be interpreted in more ways than one and this is made clear by the article's author Cory J. Herndon:

It is the Star Forge's own power itself that Herndon notes makes Darth Malak more powerful a Sith than Nadd or Kun, not merely in terms of the Force but in its ability to build a nigh endless armada of ships. Which goes hand-in-hand with the fact that Malak is being 'provided' powers by something else.

You may now note that his mask hiding cybernetic enhancements is incapable of producing said ships thus casting doubt on Herndon's claim. Firstly, it is important to note that the distinction of being 'too simple', essentially insufficient, renders that piece of context irrelevant anyway. The article is not aware of the source of this power; and given literally nothing is like the Star Forge in either scope and capability,  no matter what suggestions are presented they are wrong, this is not a limiting factor on the interpretations that may be made from it. It is a blind shot in the dark based on one of Darth Malak's most notable features. Secondly, Malak's enhancements are borne of Star Forge technology. Per Revan himself, even the smallest fragments can self-replicate until they become galaxies:

Therefore the article's original suggestion is far from a basis for dismissal nor should it be taken as a limiting factor at all.

Reading the full context of the quote enlightens this further:

An imposing figure with ghostly pale features, prominent Sith tattoos, a gleaming red lightsaber, and devastating Dark Side power, Malak struck terror into the hearts of his former allies. He also wore a vocal mask that may have concealed a form of cybernetic life-support. Did it provide him with powers far greater than even Exar Kun or Freedon Nadd, or was cybernetic enhancement too simple an explanation?

Note that Darth Malak's power is already stated, but the latter half of the quote is stated as being separate to this. This is important when noting 'did it provide him with'. The 'far greater powers' come from something else, besides Darth Malak himself. And Cory Herndon has confirmed that the Star Forge itself is what makes Darth Malak more powerful than the proceeding Sith, due to its capability to produce an armada of ships as well as its connection to the dark side of the Force.

Taken from my respect thread.

As far as the gameplay 'Enhanced Force Powers' statement goes, if you want to incorporate it into the over-all narrative. Not only does that not even have to be relevant to the statement regarding Kun AT ALL. It's also not even contradictory to the above case. It being partly Force powers from the Star Forge or not doesn't matter because the primary point was the actual amount of power both militarily and in terms of dominance.

It's simple, occam's razor requires that Cory J. Herndon the very author of the quote is right. And not that Vitiate in the space of two decades and some change suddenly underwent literal magnitudes of power growth that are never even remotely mentioned at all anywhere in the lore. Vitiate's very slow-paced power growth over the millennia makes that pretty damn impossible.

That's assuming of course that the TOTJ Narrator stating the following:

Isn't IU omniscient. Which would mean Kun as of taking the Dark Holocron was already >  Vitiate and thus the whole unsupported power growth argument for Vitiate which attempts to counter-act that problem dies in its crib because Kun's growth after killing Odan-Urr is itself demonstratably massive.

Once you also factor in other issues such as what we see actually demonstrated in the KotOR series itself. Where we have stuff like nigh-prime game Exile completely overpowered by the residual life force energy of Ludo Kressh's tomb:

Knights of the Old Republic II: The Sith Lords Prima Official Game Guide wrote:Buried under a mountain of rock at the back of the Shyrack Cave, this ancient tomb conceals a great evil power. Ludo Kressh, Sith Lord, is buried here, and his life force still haunts the halls and passages.

Knights of the Old Republic II: The Sith Lords Prima Official Game Guide wrote:Malak and his companions aren't real; they are phantoms generated by the intense dark-side power concentrated in this tomb.

Knights of the Old Republic II: The Sith Lords Prima Official Game Guide wrote:You don't stand a chance against the overwhelming power of all your companions at once.

Life force which would be nowhere near the actual power of Ludo Kressh. Meaning pretty self-evidently that Ludo Kressh is > the Traya who stomped three Jedi Masters who are each individually equal to or > DS Bastila (minus the SF amp) a demonstration which means Traya's definitely not far off from Malak at all. If even Ludo Kressh is knocking on Malak's door per the KotOR games themselves, then good luck with Exar Kun.

But if you want to be arguing that Darth Malak is far, far, far more powerful than the spirit of Exar Kun, which was stronger than BFC Luke Skywalker and was easily one of the most powerful beings in the entire post-ROTJ timeline. And then obviously the long chain of TOR characters that would scale astronomically over Malak himself via Redeemed Revan and then the Revan novel smackdown by Vitiate, who gets his ass kicked by Act 3 HOT after three centuries of power growth, blah blah blah. Then y'know, feel free. GM Luke tier prime Outlander? :maybe: