Who wins and why

If you want to go down scaling then there's this point:

Viun Gaalan "might have been a match" for Kyp Durron in combat, yet Gaalan was inferior to Ivaar Workan as Workan unlike Gaalan was among the seven High Lords, a position earned through raw power:

Ascension wrote:Although the attractive, graying human male had been a Lord for many years, he was new to his rank of High Lord. Taalon's untimely demise had paved the way for Workan's promotion. Vol had enjoyed watching Workan step into the role as if he had been born to it. While Sith truly trusted no one but themselves and the Force, Vol nonetheless regarded Workan among those who fell on the side of less likely to betray him.

Sashal, Ascension wrote:"While the humans of the Lost Tribe and the Keshiri are different races, no one has ever been excluded from achieving high rank if she can prove herself worthy. You yourself worked with Sarasu Taalon. It is merit, not genetics, that enables one to rise or fall in our culture."

Ascension wrote:But if she knew the Sith were here on Coruscant-

No. If something happened and his Master found that Workan had not warned him, Workan would not live long enough to draw breath to apologize. It had to be now.

However Kyp Durron at that time, per his own admission, was mentally post-prime:

Legacy of the Force: Exile wrote:When I was still a teenager, I was able to reach into the gravity well of a gas giant and pull a spacecraft out of it. That's something that not many Masters could accomplish. I could do it because I was strong in the Force ... and because I had absolute faith in my right, my need to use that craft for a specific purpose. But I doubt I could do it today. I'm no weaker in the Force, and I'm a lot more skilled... but today I'd know that my intended purpose was not a good one, and this knowledge would deny me the focus I needed then to perform that task. So was I a Master then, or am I a Master now?"

It's further confirmed that during JA Exar Kun had augmented Kyp Durron's power to the point that Kyp could 'barely contain' his power and is stated to be at full power:

Jedi Academy Sourcebook wrote:Over a number of weeks, Kun slowly bends Kyp to his will, and begins to augment his power.

Dark Apprentice wrote:Against the full might of Kyp Durron

Dark Apprentice wrote:His best students were going sour, getting impatient, trying to push the limits of their abilities. But he had sensed a greater, deeper menace that vibrated within the very stones of the Great Temple itself. . . evil, and well hidden.

New Essential Guide to Characters wrote:He opened himself to the spirit of the Sith Lord Exar Kun, convincing himself that Kun's power could be harnessed for noble purposes. Instead, the dark energies trampled over Durron's naïvité.

I, Jedi wrote:"And who will stop me?" I hesitated because Kyp's words seemed to echo within themselves, we were not alone, which meant Kyp's mentor had come to aid his apprentice.

"I will, if you make it necessary." An ancient sneer of contempt twisted Kyp's features.

"Puny Jedi, you are of no concern to me." Even though I had braced myself for another attack, it did no good. Kyp's previous blows were like light breezes compared to this full-on gale. I slammed back into the wall with teeth rattling-impact.

Dark Apprentice wrote:He searched, sending his thoughts like a probe deep into the storm systems of the gas giant. Behind him, Kyp felt the black-ice power of Exar Kun arise, tapping into him and reinforcing his abilities. His own feeble exploratory touch suddenly plunged forward like a blaster bolt.

It is further confirmed that Kueller as of the middle of the New Rebellion novel was more powerful than any student Luke had ever had, including Kyp Durron:

New Rebellion wrote:The presence had neared. It was strong in the dark side. He could feel the ripples, feel a power he hadn’t felt in a living being since he encountered the Emperor. Luke had never had a student that powerful, of that he was certain. Whoever it was became powerful after he had left the academy.

Yet Exar Kun's spirit was more powerful than this iteration of Kueller:

New Rebellion wrote:This Kueller had more Force capability than anyone she had encountered in years. Except Exar Kun, and he had been a spirit. Kueller was alive. He was using these deaths to replenish his own well of hatred. The dark side ate people from within, but while it did so, it gave them much too much power. He appeared to have more power than she had. More power than Luke.

New Rebellion wrote:"I've fought better than you, Kueller," Luke said. The lightsaber felt odd in his hand. "And won."

The spirit of Exar Kun is however, far less powerful than his living prime as his power was annihilated by a Jedi Wall of Light: 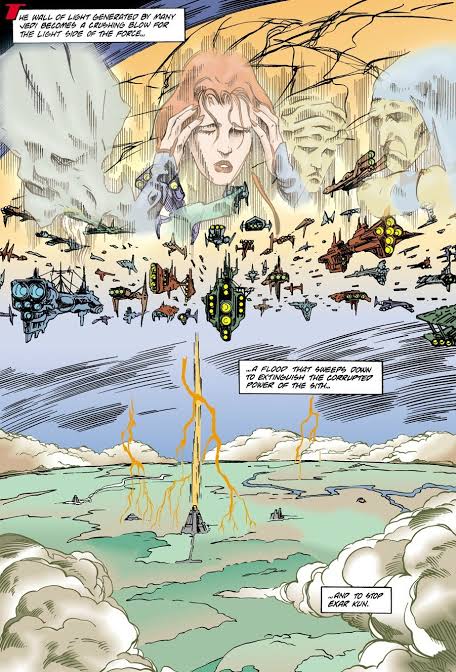 This results in him requiring to draw on the temple focal points to prevent himself from being pulled into the void in such a weak state:

Dark Side Sourcebook wrote:Exar Kun-who didn't technically die so much as merge with the dark side and retain his identity-resisted the dissolution of his spirit by drawing on the remarkable focusing energies of the Massassi temples on Yavin 4.

And he's further stated to be nigh insane by Jedi Academy:

The New Essential Guide to Characters wrote:For four thousand years he remained there, driven half mad by the unbearable isolation.

We further have confirmation that Exar Kun required restoring his lost power to resurrect, and that this entailed draining the power of the entire Jedi Academy:

Jedi Academy Sourcebook wrote:Eagerly but cautiously, Kun observes each arrival, probing for weaknesses and the power he needs to restore his lost reserves of energy. For a time, he is able to subside by feeding on their residual energy, but soon he will need worshippers if he is to grow more active. With a nucleus of followers to provide him energy-providing anger and fear, Kun will have enough power to escape his exile and take on human form.

Jedi vs. Sith: Essential Guide to the Force wrote:Exar Kun corrupted Luke’s most powerful student, Kyp Durron, and attempted to resurrect himself by draining power from Luke and the other trainees.

In a feats comparison, Exar Kun would also triumph there. But I don't think that's really needed at this point.

Kun. Not sure how to quantify the Vol feat beyond it showing he’s very powerful since he caught her by surprise.

Vol stomps. Way better showings, and no way for Kun to be feasibly be near him

Wrong. Kun's got better feats in every area and the placement to match. Vol's main claim to fame is an act exploiting an opening and not a demonstration of raw strength.

1.The fact she left herself open and is more mentally unhinged than Anakin was, is exactly why it worked. He isn't surviving Abeloth in any other way when his canonical superior in Luke can only just prevent her from snapping his neck.

2.Which is completely unquantifiable. If I want I can go on an elaborate discussion of just how far down the line Kun's Luke scaling goes but that's just as irrelevant.

Kun has better feats and basically everything. There's no basis for Vol winning at all. And I've shown the link between the two above and why Kun is higher up.