Personally, I have RotJ Luke above any member of the B-team. Not sure if he beats all of them at once, though.

Only a handful of PT/OT Jedi and Sith can take the B-Team. Luke isn't one of them.

Luke destroys the entire B team, and arguably beats windu in a close fight in canon

Luke beats any singular member of the B team, but loses solidly against them in legends

Luke destroys the entire B team, and arguably beats windu in a close fight in canon

Any form of a solid contention in any regard against Canon vader is LEAPS and bounds better than anything the B team barring windu has achieved.

It's disrespectful to both Luke and B-team to put them in this match. Lukes aptitude probably allows him to beat Fisto in a godly fight similarly to how Ventress did with form advantage and such, but Kolar and Tiin literally cannot be beaten. 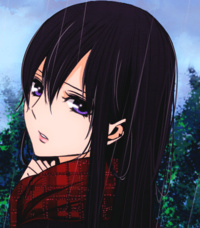 Luke should be superior to each individual member. I doubt he's going to take a majority against all of them combined, though.

@Azronger sure thing. thanks for the warm welcome

This is the official debunk for Luke being equal to Darth Vader "at the height of his powers" or "more powerful than ever before."
Numerous members have mentioned the quotes suggesting that ROTJ Luke and Vader are equals excluding emotional conflict, though that only pertains to "by the time of return of the jedi" where Vader's thoughts are all based around Luke and I will extrapolate why this actually weakens his connection with the force in this post.
Poisoned By Pride

The key to understanding the numerous circumstances that lead to Darth Vader's defeat in Return of the Jedi is knowing that after Empire Strikes Back Vader had new feelings awoken due to his contact with Luke, this is echoed in sources surrounding the time-frame of 3 ABY: 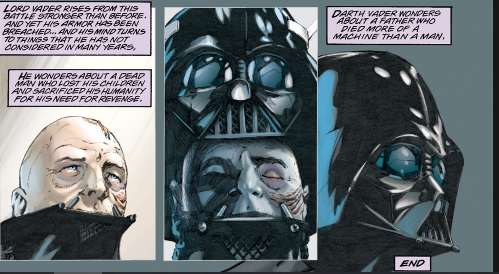 This is consistent with Shadows of the Empire which says that Vader's encounter with Luke awakens memories of Anakin: 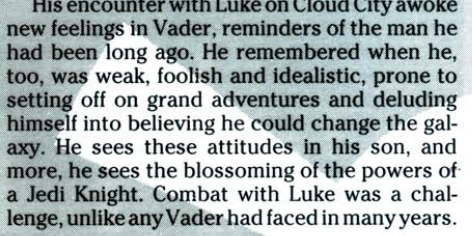 It is also implied to have given him a sort of uncharacteristic mercy and alluding that Anakin Skywalker has been re-awakened: 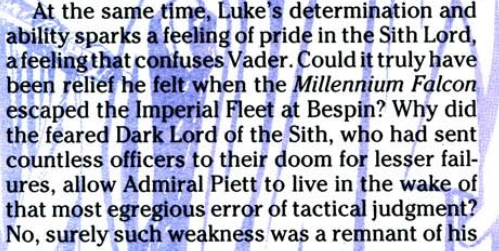 That is echoed once more in another comic surrounding the time of 3 ABY:

These are small clues, but they are consistent with Vader's emotional turmoil at this time. Furthermore, Shadows of the Empire further demonstrates how Vader's power works when he attempts a meditation:

Shadows of the Empire wrote:"for a moment, he could breathe as other beings breathed. His sense of relief, his triumph, his joy at being able to do so drove the dark side from him as surely as a light chases away a shadow. The dark side eagerly consumed anger, but it was poisoned by happiness. It left him, and when it did he could breath no longer"

This is important because when Vader later on achieves meditation it isn't joy that drives the power from his being which is "poisoning him."

Shadows of the Empire wrote:"Vader took a deep breath, blew it out, then took another. The energies of the dark side filled him, and he could once again breathe as a normal man did. He focused his anger. It was not right that he was crippled, the he couldn't do this all the time. It was... not... right! The healing energies held. As long as he could maintain his indignation, his lungs and breathing passages stayed open and clear. He fed the fires of his rage with the unfairness of a galaxy that would not let him be whole. Still the healing energies held. He fought the sense of relief he felt. Fought it and kept his anger pure. And still they held. Almost two minutes now. A new record. He would grow stronger. He would add Luke's power to his own, and he would eventually be able to shed the armor, to walk around as normal men walked. Luke... He tried to stop the smile. Failed. Sank back into the protection of his breathing chamber, unable to maintain the energies any longer. But even so, he'd managed two minutes. Eventually it would be ten minutes, then an hour, then as long as he wished. Eventually."

The mere thought of his son is enough to drive the dark side away from him, and that "spark' clearly colors his actions during this era.

To Preface this next part, I would like to thank User: @Ancient Power for informing me of the new high veracity of Fact Files per StarWars.com

Now, before the duel even began Vader's feelings were "thrown into high relief" by his dealings with Luke. The confrontation on the Endor spire "seemed to make a dent in the dark lord's armor" and "the sith lord struggled internally": 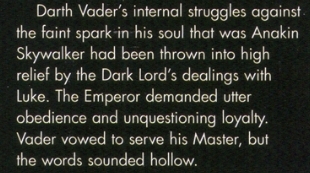 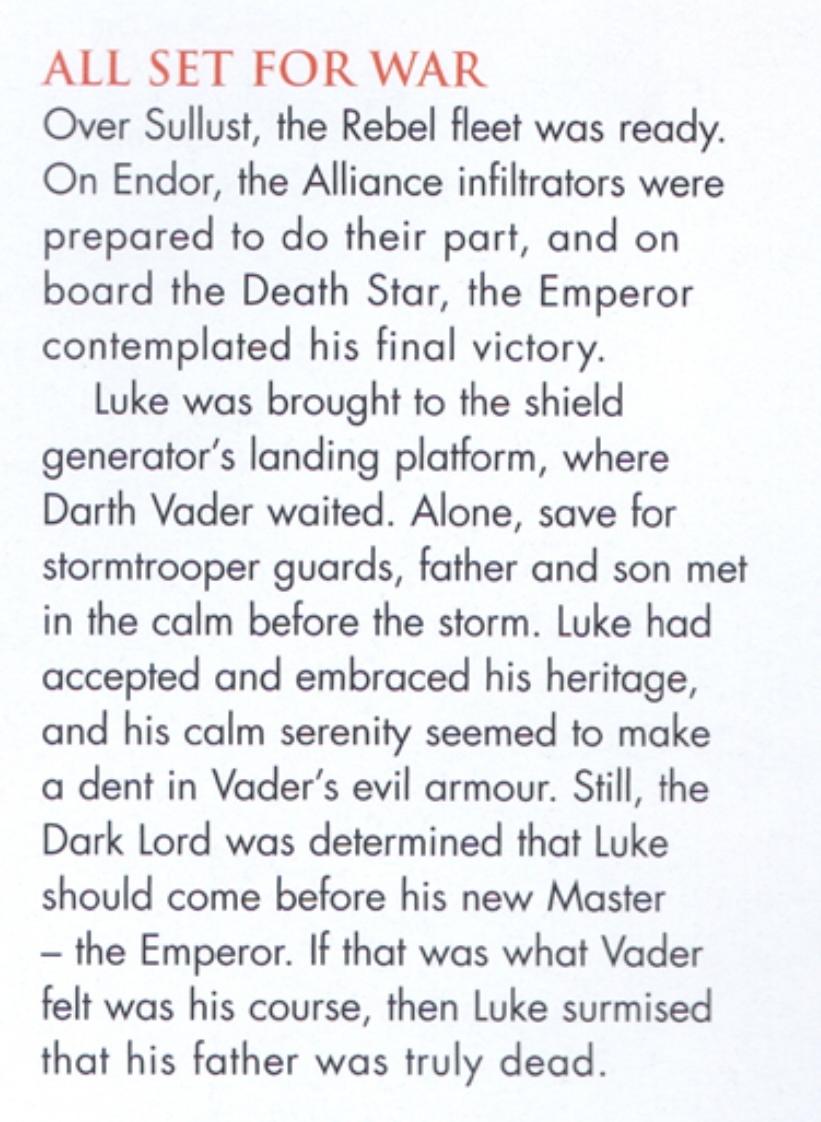 Another worthy thing to consider is that Vader was hindered by his suit per Insider: 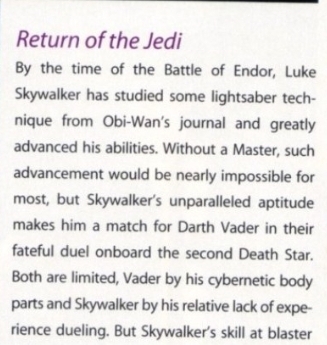 Initial thoughts would lead us to conclude that this is merely a factor of Vader's character yet once again Fact files has something different to say: 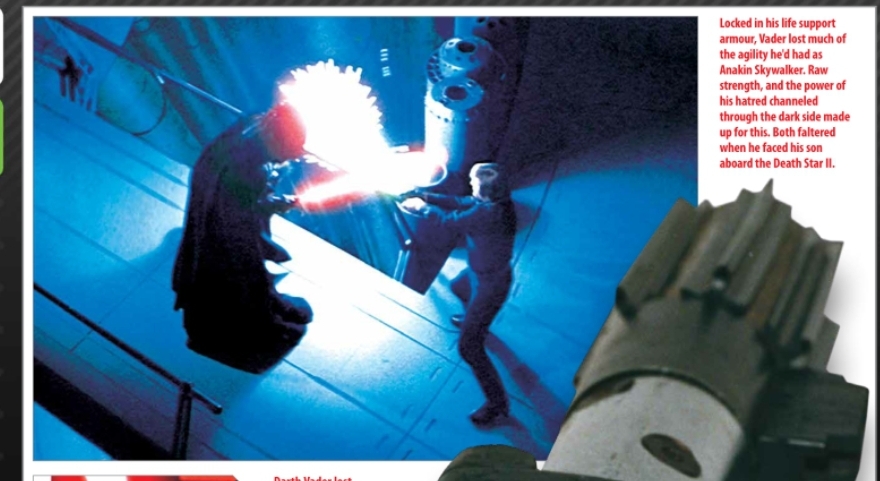 The quote specifies that normally Vader could compensate for his speed deficiency with raw strength and the power of the darkside, but on the Death Star II they faltered.

Further still the "ultimate" reason Luke is able to defeat Vader is because "it forces him to reveal his true good self":

So not only is it confirmed that Vader's conflict contributed to the duel, but he wasn't able to compensate for his physical deficiencies as he could in other duels. There is also the fact that post Return of the Jedi Luke meets his "better" in Lumiya and considers himself fairly even with Flint, two of Vader's apprentices and Luke considers Vader to be far ahead of those two. Moreover there is that whole matter of Gethzerion's power being likened to Vader in a book that Lucas approved on that specific point. I just don't want to create some 40 paged mass blog, so I kept it concise. So that's really it, I don't think I need any more evidence that was a pretty comprehensive case. It's relevant to this thread because I don't think it would be fair to scale him relative to Vader as a force user or duelist given the circumstances and constraints Vader was working with.