Pretending like Kit Fiso has done anything remotely close to matching Maul in a lightsaber duel.

Meatpants wrote:Pretending like Kit Fiso has done anything remotely close to matching Maul in a lightsaber duel.

"He's with me," Qui-Gon started to say. The agent crouched and fired, hitting Boiny Square in the chest and hurling him backwards on the walkway. Then he whirled on Qui-gon, firing steadily. Qui-Gon unleashed his lightsaber. But the blaster Bolts were delivered with such speed and precision that he was hard pressed to deflect all of them. Two whizzed past his blade, grazing his left arm and right leg. he stumbled slightly. 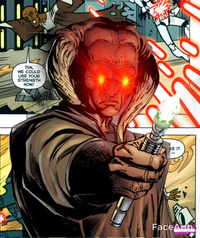 Meatpants wrote:Pretending like Kit Fiso has done anything remotely close to matching Maul in a lightsaber duel.

How about being monstrously superior to 12 months post AOTC Kenobi, being one of 4 of the best Jedi the Order has to offer in facing Palpatine (making him superior to Cin Drallig, who was fast enough to briefly duel KFV while clones were firing at him simultaneously, Shaak Ti, who’s superior to Maul+ Felucia Galen, and Soara Antana, who is decisively superior to AOTC Kenobi and Skywalker, and several other beastly Jedi like Even Piell and Jocasta Nu) and being able to hold out fairly well against Darth Sidious.

The Maul duel is literally all Jinn has to his name, which can’t even adequately be used as wank for him as Maul was baiting him the entire fight and even then, those 30 seconds when he does pressure Maul literally drained his reserves in like 15 seconds lol. When you look to his other feats, all you’re left with is struggling with Xanatos, losing to Xanatos and Femur in a spar, getting pressured by 17 year old Kenobi (meaning that TPM Kenobi is likely right on his doorstep), and nearly dying to Aurra Sing with Kenobi present as backup.

Honestly, it’s you who has to prove why Jinn would last more than 10 seconds top against Fisto when he’s struggling with beings (including Maul) who are vastly below Fisto’s calibre.

Qui Gon is a proper 7. I would probably put him as a low 8 but he is a legit 7 per Gillard there

Jinn and TPM Kenobi are low 7s, AotC Kenobi is a mid 7, Fisto is a high 7. That's more like it

@LOTL wrote:Qui Gon is a proper 7. I would probably put him as a low 8 but he is a legit 7 per Gillard there

So then where do you rank Suit Vader? Tier 9 along with Gillard?

To be fair, Gillard said that Vader is a 9 because "a druggy is always a druggy" and pre-suit Vader wasn't mentally a 9, only physically, because he lacked the mental discipline, and even suited Vader had mental health problems, he had crippling depression, which was a reoccuring theme in the EU, and Star Wars Galaxy magazine said that he suffered from an inability to let go of his old life, which suggests that Vader suffered from dissocative identity disorder. 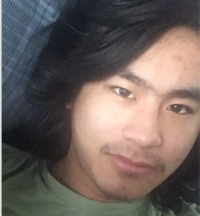 Well considering his new life and the context of how it happened Vader having a identity disorder would make sense.