My conversation with BoD here.

oh i read that, but that seemed somewhat unfinished kek

@Meatpants In a seminar right now so will reply in a bit.

So Sidious just developed more and more flaws in his style as he aged?

That's normally how age affects you, yes. Your stamina and endurance decrease as you get older, which of course would limit you in a duel. And since we're on the subject, Gillard clearly takes into account mental (and logically, physical) factors when talking about stylistic flaws:

Gillard made is quite clear that between tier 9 duelists, style is the deciding factor (assuming the environment is neutral);


Of course it's a deciding factor, but it's not the only one. Strength, speed, power, stamina, age, mental state, endurance, and tactical abilities have proven time and time again that they too can be deciding factors within duels. For example, Obi-Wan outsmarting MFV through tactics, or Lumiya using a lightwhip to gain an advantage over more powerful and more skilled beings like Luke. Claiming that a style is the only deciding factor belies the nature of a fight as a series of events that can be just as down to luck (such as one character moving too slow, or another character being lulled into a false of security, or even a successful feint) to end the duel as they are style. Obi-Wan is a great example of luck and tactics being the deciding factor in a duel, not necessarily his style. Take him versus Maul, for example. Maul bests him, then he gets lucky, catches Maul off-guard and slices him in half. Or against MFV, against whom he used tactics (manipulating his prosthetic arm, drawing him to the bank, taking the high ground, etc) and had a healthy dose of luck to help him.

so having the least flaws in your style is logically gonna help a lot, no? And having a style with less flaws than Sidious or Yoda isn't anything to scoff at.

Never said it wasn't, but the flaws you refer to are physiological in nature and don't prove Anakin is more skilled than either. All it proves is he has greater stamina and isn't hindered by physical factors like age or IU height. 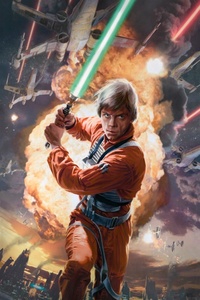 now let’s address this egoistical downplaying Vader hater AKA DC I cant remember his name nor do I care.

I said a great disturbance in the force, as if an arrogant brat suddenly started flushing out his ego and is In serious need of the Mustifar treatment.
______________

Luke was still equal to Vader before the rage amp, and Anakin was fighting as a superior to Dooku by forcing him up the stairs, pushing him back, and kicking him off the platform. Obi-Wan the “LEAST” atuned Force user went from being fodder to Dooku to scaring the crap out of him to the point where he needed to call upon Dark Side energy from across the universe as stated in the RotS novel to beat him.

In TFA Starkiller outfenced and overpowered while Galen himself was heavily injured Vader but a year later a more powerful Starkiller with a second saber tried the same and failed because Vader has improved a lot in the less than a year time. Now imagine him with five years... you can not think he Improved much, but it’s factual unlike your bias headcanon. The Death Star novel says and I quote here: “He sill had skill just out of practice” proving that as a duelist Kenobi wasn’t too far behind, and remember that all Kenobi did while in hiding was learn how to become a better Jedi Master and study the Force with help from Qui-Gon Jinn (this did happen in the Kenobi novel bty) meaning that the Force should be much stronger with him at that point then it’s ever been which means that Dooku probably couldn’t throw him though if Palpatine helped him out then Kenobi would still be toast (like what happened in the movie). So there based on this Vader four whole years before his prime would be equal to a Kenobi who isn’t that far beneath his RotS version who Dooku already basically admitted he couldn’t beat in a straight up duel and had to use everything he had to just throw him which would make pre prime Vader at least comparable to Dooku. You can’t use this because Dooku again couldn’t overcome Kenobi with lightsaber technique meanwhile Vader’s fight with Kenobi was almost entirely saber to saber combat with no Force powers being included.

its not a fan theory it’s freaking implied in the movie. Besides if Dooku did that then why could he not do the same to Anakin Especially when Anakin was about to kill him? Remember Anakin and Kenobi are equals with the Force https://youtu.be/xTnQw188xyo .

Wasn’t his D burnt off? Don’t accuse me of that when all you do quote misleading sources that Contradict the movie, the novelization, and the script, for ANH in order to downplay a character that you hate while you yourself speak highly about yourself just to inflate your ego. And what dose Lucas have to do with anything?

Now time to debunk the myth that Old Ben is = to Vader because a misleading source said so:

Rise and Fall of Vader: “he looks so old, Vader thought, but knew he better not assume Kenobi had weakened with age as Vader moved slowly toward him” (Vader is being cautious because he is afraid Kenobi could turn him into a burnt up husk again) “Vader expected Obi-Wan to address him by his name Anakin rather than his Sith title alone. “He’s trying good confuse me” (Vader is still being cautious). Obi Wan moves fast, lunged his weapon at Vader but the Dark Lord blocked all of them with ease” (Vader keeps up with not holding back Kenobi while he himself was holding back with “EASE”)

Death Star: “if the old man thought he could rattle him by attacking rather than defending he was mistaken. Vader just sped up his timing and took the initiative forcing the old Jedi to defend. (Vader was in control of the fight from here on out). There has always been in Vader a small bit of worry. Not much; just a trace. (Vader is cautious). Vader backed Obi Wan past an Open blast door leading to the forward dock where the rebel freighter was being held under guard. (Vader was now in complete control of the fight). The old man was obviously tiring (Kenobi was tiring meaning he couldn’t keep the fight up for much longer ergo not on Vader’s level). Oh and the ANH novel says Vader actually defeated Kenobi not that Kenobi threw the fight. Oh and

"This duel was very different from their last. Obi-Wan was older and weaker while Vader was even stronger, fueled by hatred and thirst for revenge."
> Jedi Battles


To recap: Kenobi (who was going all out) tried to throw Vader off guard which failed, Vader (who was holding back because of how cautious he was) was basically controlling the entire fight even leading it to a location of his choosing while Kenobi tired out, in a last ditch effort Kenobi used all of his remaining strength to attack Vader quickly but Vader easily blocked everything, Kenobi threw the fight knowing he couldn’t win but at the same time he gave the heroes enough time to escape and distracted Vader. Pre prime Vader >>> Kenobi as a swordsman.[/size]

Couldn't read past the first sentence. Please, fix your formatting.

What’s wrong with my formatting?

Edit and lower the size

How do I do that?

I did. And what next?

You hit Ctrl a and lower the size

Okay, is it readable now? I wish I could do better but I don’t know how to do the blue quotation marks.

Just put the word quote in these brackets: [], copy-paste what DC and do the same to close the quote, but put a slash before the word quote (e.g. [/quote]).

Maybe it's my explanation. Read this and follow the steps, then tell me the result:

Only without the star (I had to insert that because otherwise, it'd actually quote "insert text").

Or do it with the quote feature