I doubt that 3 Yoda level characters are losing to ROTJ Sidious tbh.

How are Revan and Vaylin ~ Yoda?

Even if Sheev's skill knowledge had diminishing returns or stayed the same his power increasing would seemingly increase all of his existing skill. Remember all those people in Star Wars whose saber prowess stayed the same after increases in power? Oh no wait, that's just Sheev, but he actually got worse.

For some reason Sheev arguably lost two saber engagements which threatened his life and then he's like "Guess Izes don't need to brush up on mys saber skills or ever use a Saber agains, except those times when Ize uses thems."

The only thing to the contrary I can get behind is his physicality hindering them at this stage in time. But I mean the force can neutralize that, so... but then again, decrease in physical stats but an increase in power could cancel each other out and you wind up on ROTS Sheev level in sabers anyway if you're being fair. Otherwise there's no basis at all to assume his standing and you just arbitrarily place him as low as you want so he loses even though that goes against the core of his character until about DE with his old body. Potential frailty is a much better sell if you actually went that way though imo. Which... didn't happen here.

But if we ignore his saber skills still being said to be potent, him killing Jedi, or him apparently having his saber up his sleeve in the DS ending of TFU (IE ready to use it at a moment's notice), and we apply real life knowledge to see how much his skill atrophied; then DE makes no sense. Everything should be foreign to him and all of his range would be messed up. He would be imprecise and his timing both offensive and defensively would be ruined. The movements themselves would feel off to him and he would likely try to compensate on his sloppiness for over committing with raw power. He would be quite a bit slower, and his footwork would likely leave him stumbling at times as well due to not being used to it. To say nothing of the potential for injury as well. It diminishes to a point where he needs to relearn it over time, and not instantly in a battle. None of those real world factors came through in DE, and as such I find it hard to believe he was completely out of practice in the way it gets used in these threads.

I'm not entirely sure what the exact argument is for him losing skill, but I imagine they think he's just worse with zero other downsides based not on Star Wars, nor on real life. What does that mean exactly? He just dropped down to prime Maul level with zero other downsides besides being on that level? Still has all the timing of Maul and speed but he lost a massive amount of skill? It would help if the downsides were defined and laid out to help bolster the argument besides "no saber touching, allergies" when all that does is lead the opposition to assume the end results of that; while you use it to just place him willy nilly based on the character you represent.

@Quorian Debatist Well, with me it's moreso lack of knowledge of the fact that he used his saber post ROTS. Ben went from His ROTS self to pretty much fodder in terms of saber combat, so it seemed to me that Sheev underwent a similar loss.

Tbf, Sidious wouldn't have ever needed to touch a lightsaber again after that. The only other time he used a lightsaber before DE and after ANH was when he fodderised a group of Jedi for fun. Logically, there's no way his skills would be as sharp as ever.

I didn't know Sidious experienced an actual loss in power like Ben did, or stated decreases in saber skills. But if Ben did then Sidious must have as well because they're the same character.

The only time Sidious really used a lightsaber was during his apprenticeship, against Maul a couple times, and in ROTS. He was at his busiest and needed the most secrecy from TPM to ROTS which would mean less training. There's no reason he was as skilled as he was in the first place. Just because we don't have him training all the time or using it, doesn't mean he just dropped in skill when there's quotes to the contrary.

Nevermind the fact that he apparently carried it up his sleeve well past ROTS. Which means he had it on him a lot and had ample time to swing it around if need be. Arguing he couldn't have kept his skills intact because we didn't see it is like arguing he only existed a handful of times after ROTS. And in those few appearances where he actually does more than sit around, he uses a saber once and has it on his person in another appearance. Which is a high percentage compared to the 3-4 times where he uses his power with no visible saber. 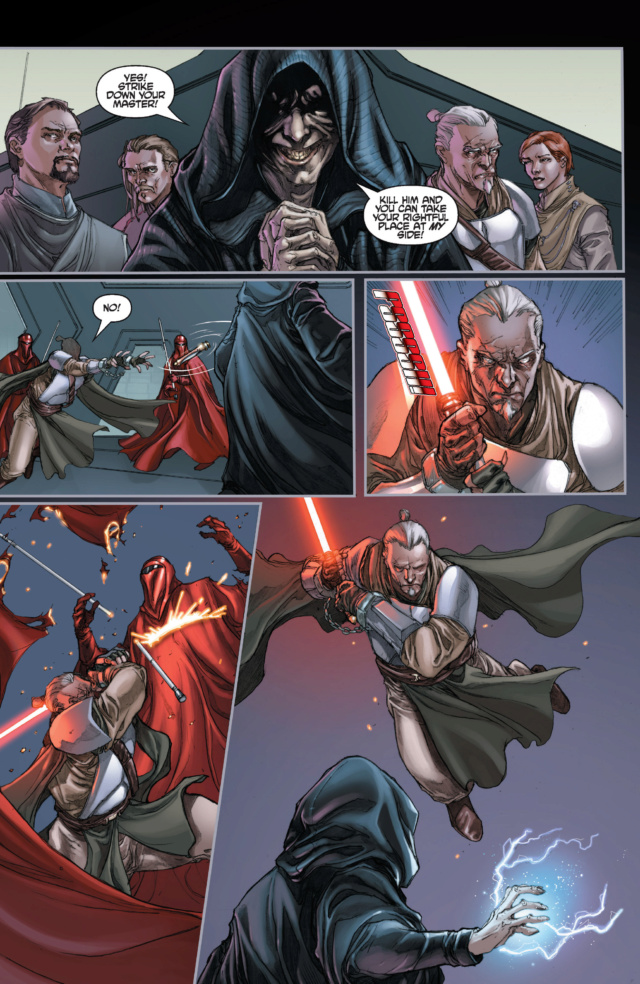 Logically his skills declined because he didn't have 3 lightsaber duels like in TCW/ROTS? Do you think his skill came from those duels as opposed to coming into the fight with those skills?

But if Ben did then Sidious must have as well because they're the same character.

IG (Exists) wrote:. Ben went from His ROTS self to pretty much fodder in terms of saber combat, so it seemed to me that Sheev underwent a similar loss.

Based on what exactly? Also Ben isn't Sidious and Sidious isn't Ben, just because they're both old, doesn't mean they are gonna decline.

It’s Moreso the idea that without practice across two decades, they’re going to decline in terms of saber skill.

IG (Exists) wrote:It’s Moreso the idea that without practice across two decades, they’re going to decline in terms of saber skill.

Which is mere speculation, this isn't real life. The fact that Ben can hold up against Vader in a fight, who unlike Ben had been killing many Jedi and fighting, shows that Ben's skill hadn't waned much if at all.

Plus I do recall that Ben did end up practicing once more sometime before the events of ANH, can't remember the source though. It also wasn't a complete 2 decades he went without dueling someone given Hett, yeah it was only 3 years into his exile but still.

Anyway though, for Ben it seems more like that old saying "it's like riding a bike, you never forget." sort of thing.

Which is why I didn’t really attempt to argue it, instead hyst presented it as an idea

By TPM, Yoda hasn't picked up a lightsaber in decades and is still the best duelist in the Order. Also kinda really doubt Yoda was sparring a lot to upkeep his skills post-TPM either. I mean, his duel with Dooku was stated to be enough practice - one duel. Sidious had like three major duels, and a couple of minor ones. Probably enough to keep him sharp.

@Zenwolf @IG (Exists): I'll post below something I wrote a couple years ago. Though Ben may not have declined in power, his combat skills definitely did.

Something I wrote a couple years ago for some debate:

Ben’s “Jedi powers” were stated to have not declined, which is supported by his continuous “honing” of Force skills on Tatooine. However, a hyperattentive Vader trekked through a multi-minute fight with Ben and noted at the start, middle, and end that he declined. While the junior novel states Vader was wrong -- “He had assumed Obi-Wan's study of the Force had ended long ago, and that his powers had diminished over time. But Vader was wrong." Though, given Vader's proven "wrong" because Ben becomes a Force ghost, the quote may be suggesting that, although Ben’s power didn’t weaken, his strengths shifted from combative powers toward deeper, spiritual abilities. Or, at the very least, clearly Ben offered nothing to make Vader think he had grown stronger.

Ben’s lightsaber exercises weren’t enough for him to maintain his level. Ben’s “movements were slowed by lack of practice,” whereas 17 BBY Obi-Wan said it was “fortunate” he had not yet “allowed his reflexes to become dull.” Moreover, Ben hadn’t “fought another lightsaber-wielder for many years” (i.e. seventeen years), yet 19 BBY Obi-Wan sparred with Anakin for “thousands of hours” and frequently dueled Dooku, Maul, Grievous, and Asajj Ventress. Note that 17 BBY Obi-Wan didn’t want to even “think about how long it had been since he had last used his lightsaber in combat” after only two years, so imagine those effects ninefold. Simply put, Death Star states, “He still had some skill, his old Master did, but he was out of practice. Vader could feel it through the Force,” which seems to be the overwhelming consensus.

Ben’s repeatedly stated to be “older and weaker” than before. His “movements were slowed by age,” and Lucas noted it was physically “hard” for Ben to even fight: “In this rendition, Vader was half-man, half-machine, and Obi-Wan was pretty much an old man, so this fight was a hard one for them. It wasn’t an acrobatic, jump-around, fast fight. It was a hard fight to fight, because they’re both kind of old Jedi.” And that nosedive in Force augmentation makes sense: a Force user in their physical apex with 15 Force points would be stronger and faster than a far older, frailer Force user also with 15 Force points.

Overall, Vader gauged Ben to have noticeably weakened in every way. And even if Ben’s raw power remained steady, omniscient sources directly collaborate Vader’s thoughts for everything else. Plus, Star Wars Insider states Obi-Wan’s prime was ROTS -- “Obi-Wan’s confidence in facing greater odds, and his ruthlessness in taking down the droids who attack him, show us the Jedi in his prime” -- and Fightsaber states Ben “knew he was a shadow of his former self.” So, all in all, ROTS Obi-Wan was a far more formidable opponent than ANH Ben Kenobi.

That's all well and good, but to what extent did his skills decline? Even despite all that, it's still noted he's a formidable duelist regardless of his slowing. Seems to me, that whatever differences there might be aren't that huge.

Sure his younger self would be more agile and quicker, but we don't know the gap between his younger and older self.

Saying he "slowed and was weaker by age" doesn't exactly mean much because we don't know by how much and The Force could compensate for those things. It's not like old people can't be great at things anyway. Plus that's all referring to his movements, not his lightsaber skill.

....But anyhow, me thinks we're trailing off the topic here so moving along with this.

I'm not sure there's any real reason to believe Sidious declined with saber skill, if before he hadn't used one in years prior to his fight with Mace/Yoda, why would we have reason to believe he would at all? Then taking into account later on when he gets a younger body in DE, there's more evidence suggesting his skill hadn't waned.

Lucas clarified the Ben vs Vader comments were logistic comments, not IU ones. Vader also notes that Ben is still skilled, just not as skilled as he once was. Doesn't mean the gap was massive.

As for the "shadow" quote, the Obi-Wan and Anakin the quote is referring to were operating at their absolute peaks. Vader was = Sheev at the time and Obi-Wan was physically and mentally enlightened and operating at a mental level beyond anything he's had before or since. Nothing stopping Ben from being > TCW Kenobi in skill, for example.

Ben is also more powerful than ever.