He won't colonize your lands, fear not.

*God save the Queen intensifies* 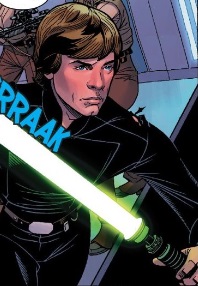 ISV wrote:Kharys isn't nearly as impressive and I don't think we can really class her as a full trained apprentice. Kharys had her hide handed to her by an untrained luke skywalker in the air which was her domain. Vader granted a portion of his lower to Kharys, but she just doesn't live up to the hype. Flint on the other hand matched luke beat for beat as of rotj for a little while, a MUCH better feat imo

I'm not saying Flint isn't impressive. But Kharys is still an apprentice of Vader. He trained her in Form VII, arguably the most advanced lightsaber form. He also taught her a rare, obscure Sith ritual, as well as Force stun. Not to mention Vader basically lets Kharys rule an entirely planet. Meanwhile, Flint had been trained for Vader for only a few months. He made a shocking amount of progress during that training, being able to hold his own against Luke, but we don't see him do much aside from lightsaber combat and very, very basic TK to throw a rock at Luke.

Also, Luke was solidly losing to Kharys. During the actual battle itself, Luke is totally outmatched and tries to put space between them to buy time.


'She's--good! And worse, I've got to worry about her wings and foot claws, as well as that saber.'

'Ben Kenobi hardly had any time to train me how to use this thing...

... Before Darth Vader killed him.

But it's obvious Kharys has been using lightsabers all her life!'

Hit full-rise on my anti-grav belt. It'll take me out of her reach, buy me some time.'

Kharys also pulls off a successful Force stun, which takes "all the power of [Luke's] will" to break free from. Even with him free, he only wins through deceiving Kharys into believing he's still stunned.


It's the Force! She's using it to dull my wits, make me an easy, helpless target. And here she comes to finish the job!

Grimly, almost desperately--Luke Skywalker focuses all the power of his will.

He wants only one thing--to move. He tries. He fails. With the battle cry of her ancient, avian race... ...Kharys dives for the kill.

But at the last instant--impossibly--the attack is checked! Her saber glances off Luke's and before her startled mind is even aware of what's happening, the matriarch is dead.

'It took everything I had to pretend I was still frozen--but I had to decoy her in close. I had to be sure I wouldn't miss.'

So I wouldn't say Kharys got her "hide handed to her" in this fight. Luke won through deception and his innate raw power allowing him to shake off Kharys' psychic attack. He basically outright admitted his inferiority to Kharys. By this point in the timeline, Luke has also bested Baron Tagge once, and in the very next issue, he defeats Tagge more legitimately. So despite Luke's relative lack of training, he's still somewhat impressive. Luke's first showdown against Tagge shows us just how advanced Luke is by this point.


"Your reflexes are excellent... You show some skill... But your technique is primitive. Almost nonexistent. A talented amateur... With the benefit of only a few lessons.

Reactions honed in countless hours of practice and training save the baron...

But suddenly he realizes a much different battle is being fought that the one he began...

... And to win that battle, even with all his considerable skill....

He must fight for his life!

Yet for every stunning attack and counter attack pattern Tagge launches... The boy's light blade is there!

Luke's strokes are awkward... Unorthodox... Coming from no training principles or fighting systems the baron has ever encountered...

... And his mind seems focused on something beyond the combat. For the first time since he achieved mastery of the lightsaber... Baron Tagge feels the need to give ground!

This level of advanced performance carries over to his second duel against Tagge, where he quickly lands a devastating strike on Tagge, then a fatal thrust when Tagge attempted to rally and strike Luke down.

So basically, Kharys>Luke>Tagge, who is repeatedly described as having mastered lightsaber combat.

Well you convinced me I'll have to add Kharys to my list of Vader's apprentices. Now as for Kharys if you like her I believe she appears in a TCW novel where she meets Anakin, you may find further wank for here there friend

I'll have to keep an eye out for that. Honestly, I'm mostly just a fan of the old Marvel comics. They're so ridiculously corny, but really entertaining.

Is anything going to be done on this?

@LOTL Deadlines are approaching for uni so it's been delayed.

BreakofDawn wrote:@LOTL Deadlines are approaching for uni so it's been delayed.

your go to university?

Not sure why that's such a surprise, lol.

Message reputation : 100% (1 vote)
He is saying that u not smart enough to go 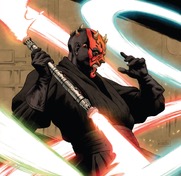 @Underachiever599 Aliens in the Empire, if I'm not wrong.

Just a reque, but would u ever do Vader vs Anya kuro?

The one Stover wrote. In contrast to the junior novel.

Thanks! I'll give that one a read

The one Stover wrote. In contrast to the junior novel.

I agree Matthew Stover's ROTS novel is great, though one thing I found stupid about it was he made Dooku a xenophobic against aliens for whatever reason?