Several responses laid out for me to respond to once my SS post is done. Lovely, I'll be sure to get back to this, and if I don't, remind me.

Seeing this Krayt wankage is like watching someone compare HK-47 and C-3PO.

Oh shit, yeah, I've got that to respond to as well.

Message reputation : 100% (4 votes)
While it is true that comics don't always have a nice linear time attached to them, and also true that comics don't show every attack even panel to panel, I feel the whole "it happened outside" is enough to show a stretch happened off panel. They did afterall start the fight inside and the end result was a couple meters away from where a shuttle would land. I ain't no engineer but logic would dictate that anywhere a shuttle lands would be at least 10m away from the building, so they traveled somewhat of a distance. The conversation also is kind of retarded if it followed from the previous point. It's just generic battle cries, not a fluid Google Hangouts Heirachy of conversation.

Now I don't claim to have researched this very much but I did find an aerial view which looks like a disaster to land anywhere close. 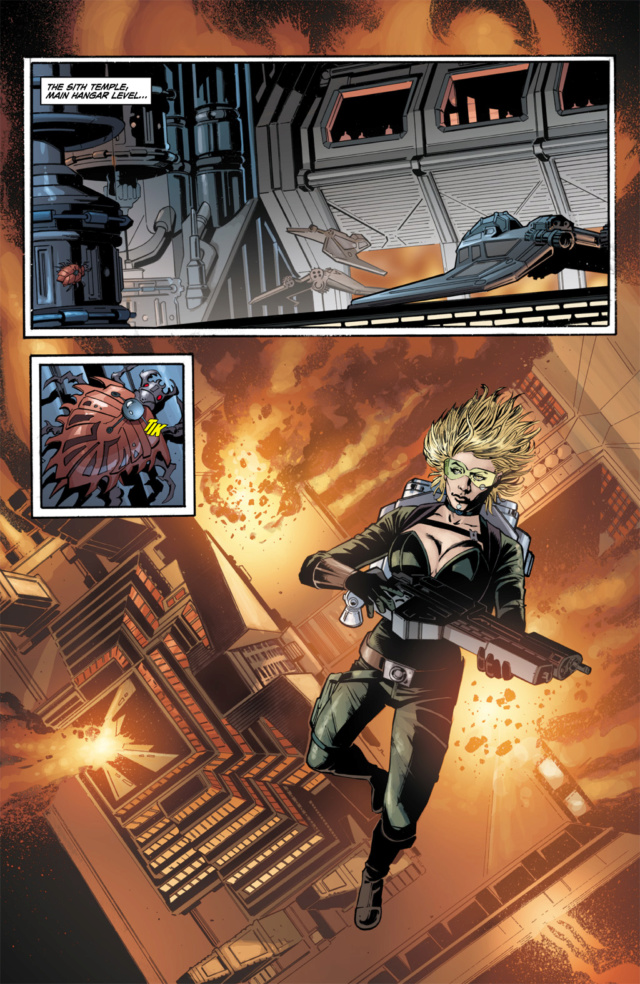 So with this in place, I do agree that they fought likely as long as the knights fought since the battle moved.

That being said, fights happening off-panel happens all the time. If the only things we see of the fight are Grey-Tier ragdolling, then why would we assume anything different happened off-panel? Did the artist and writer seek to avoid showing how well the protagonist of a 56 issue series fought for some reason? What about the on-panel fight made you think Cade did exceptionally well in secret? Where was Krayt pushed to lead you to this conclusion?

Cade lasted sure, but he wasn't shown to be bringing the fight to Krayt who apparently wanted Cade alive. While this is a feat for Cade, it isn't enough to create parity with Krayt; and that's an important distinction glossed over. We see people surviving all the time in real life fights even when they're nowhere near in any aspect. If you are getting outclassed the entire fight and getting flung 10s of feet that would seek to bide time, then your durability and rat-like survivability doesn't bring you closer in power. This also brings a question of what happened in the duel. It's doubtful a lightsaber duel brought them that far away in a short time but a time sink like force powers would and could. Also reinforced by like the 3 force attacks Krayt used in the 3 pages of the fight. If Cade is just jumping like a retard at Krayt and getting Greydolled in retaliation then that would kill more time with less potential lethality than an intense saber duel where many exchanges are had. This is of course ignoring someone just turtling and looking to survive as opposed to winning. A good example of the latter is Kenobi vs Mustafar Vader. Kenobi turtled and backtracked for a large portion of the fight in a way that bypassed a pure power vs power/skill vs skill comparison. Not saying the entire battle was like that, but Kenobi didn't have to fight on Anakin's terms when he didn't have to. He didn't have to be offensive, he just had to move, defend and wait for an opening. He wasn't pressing Anakin for the portions where he was running, but he was keeping in the fight; he was stalling through his own skill.

A good example of the former is Shinya Aoki vs Nagashima. Shinya Aoki is a very potent grappler with minimal standup. Nagashima is a crossdressing kickboxer with a lot of power. What happened is they agreed to a standup round, and then an MMA round. All Aoki had to do is survive the first round to win... on paper. What Aoki did was stall by pretty much Grey Ragdolling himself repeatedly and killing time, which he did. He survived the entire standup round by flying through the air essentially. Then when the fight got serious, well he got murdered. You starting to see the connection here? If Cade is spending large portions of the fight getting Greydolled then that kills time he would otherwise have to use by pitting his might against Krayt and risking death. Getting thrown around like a child away from the adult is a lot more favorable than standing within arm's reach of an instant death.

So those are two very likely ways to survive in a battle against someone better than you. Couple with what we saw on panel, it's doubtful the off-panel portion was any closer. I don't know what happened and neither do you, but we can make a few logical assumptions based on what we saw on-panel, and none of it points favorably towards Cade; unless you want to argue he's a force cockroach.


Onto how Krayt ended the fight. You yourself - Harry Potter Legend - are a fencer, correct? If sources are correct, you're one of the top 3 fencers in the country. So you know your way around a shaft. Let's say you're in the middle of a fencing duel, and someone's hand just starts glowing and he's about 8 feet away with his saber at his side. He then reaches out to you from that distance with a telegraphed attack. Do you

If a fencer forgoes all defense and just grabs you with an attack you saw coming from over a human's body length away, are you of the same skill level? What would happen if that was just Krayt's normal second saber that has a four-five foot reach advantage over his hand? It certainly seemed like Krayt just decided to end it to me. He just reached out and made physical contact from a disadvantageous position and distance away. It wasn't out of desperation, nor was it a hidden attack. His hand was visibly glowing and telegraphing the attack and Cade couldn't do anything to stop it. And lost.

In that moment Cade had a potential 4-5 foot reach advantage on Krayt along with a warning and still allowed it to happen. If the only attacks shown are Cade looking like a Grey victim and then losing to a stupid attack like this, then I think it dubious at best to hold it against Krayt.

Sorry this post was messy and ill-thought out but my Dad just came back into my life and took my phone away. This is actually my dad who wrote this on a phone or rather this is me; Fatherian Debatist who wrote this. I will get the hang of this now that I'm back from getting cigarettes at the store.

Basically, you can try to dilute the Cade juice as much as you want, but that alone will not get your phone back.

Implying that Krayt is on Sidious's level which is BS