@LadyKulvax wrote:His dark side reborn self is recovering from all the damage his Vong armor did to his body.

Exar Kun has this chain:

Or you could go for a completely broken chain such as:

A bit beyond Krayt, yeah.

Even if your horrendous scale chain worked, you are implying that Krayt didn't grow during his 90+ years of training and immersion in the dark side. It's just not feasible claim to make, when there are multiple sources stating his growth was immense.

Freedon Nadd even in his prime was stated to not be worthy of Sith (Ragnos's) power. Only Kun, upon arriving at Korriban and Yavin IV was.

Freedon Nadd murdered a living Sadow upon becoming far more powerful than him and then spent the next century becoming even more powerful. Nadd makes Sadow his bitch, basically.

finding an explanation to everything ruins the obvious. i still think that the obvious show in the fight was that luke ~ krayt. thats my imo. u can talk about nexus this, nexus that, but there was an intent there that they were equals.

I honestly don't have a gif strong enough to convey the cringeworthiness of these BS scaling chains.

@LadyKulvax wrote:Freedon Nadd even in his prime was stated to not be worthy of Sith (Ragnos's) power. Only Kun, upon arriving at Korriban and Yavin IV was.

Freedon Nadd murdered a living Sadow upon becoming far more powerful than him and then spent the next century becoming even more powerful. Nadd makes Sadow his bitch, basically.

that seems weird, as it might relate to power. Dooku>> maul as of TPM, and yet, sheev still preferred maul. it might have to do with potential, which i can agree with. i still think Nadd> Ragnos, but not by much.

BreakofDawn wrote:I honestly don't have a gif strong enough to convey the cringeworthiness of these BS scaling chains.

BreakofDawn wrote:I honestly don't have a gif strong enough to convey the cringeworthiness of these BS scaling chains.

Probably look like we did when you tried to claim Nomi, Ulic, Cay and Tott had 'their work cut out for them' because Exar Kun is really impolite.

Anyway, you want the sources then fine.

The Complete Star Wars Encyclopedia wrote:Kun, Exar. Once the most powerful and dangerous of the Dark Lords of the Sith, he was responsible for the deaths of millions four millennia before the rise of the Empire. 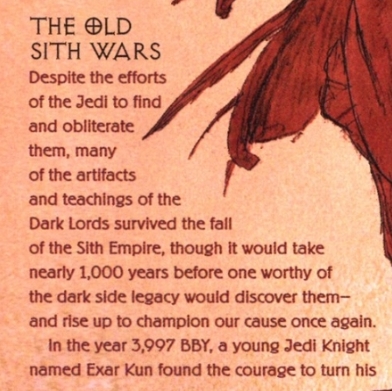 Chronicles of the Old Republic wrote:Here on YAVIN 4, Sadow drew on Sith technology and sorcery to cocoon himself in suspended animation until awakened at a future Golden Age.

The Dark Legacy of Yavin Four wrote:Sadow was even powerful enough to stave off the inevitable. He placed himself in a near-death slumber, which he remained in for hundreds of years, waiting until someone would come to take his place….

SWTOR: The Dread War wrote:Dread Master Tyrans: Long ago, you sought to free us from Belsavis prison.

Dread Master Calphayus: Since then you have grown, in mind and body; in skill and in spirit.

SWTOR: Encyclopedia wrote:It is in the Dark Council chambers on Korriban that the Sith inquisitor finally corners and utterly destroys the once supreme Sith while the Dark Council bears witness.

Darth Thanaton has grown immensely over the decades, going from the disgraced Sith apprentice Teneb Kel who was no match for Darth Marr to a supremely powerful Sith; one Darth Marr never thought would be replaced in his lifetime:

SWTOR: Encyclopedia wrote:But the inquisitor nearly loses everything after being caught in a trap devised by Darth Thanaton, a supremely powerful Sith and harsh traditionalist who bristles at the idea of a former slave rising to sudden influence.

Darth Marr, SWTOR wrote:“I did not think I would live to see Thanaton overthrown.”

Galactic History 87: A Wayward Apprentice wrote:The Dark Council dispatched the young Sith Teneb Kel to hunt Exal Kressh. He followed her to Lenico, where a vision showed him the Emperor’s true plans; plans Exal had rebelled against. As a Republic fleet used information supplied by Exal to attack Korriban, Teneb Kel and Exal Kressh clashed in Korriban’s tombs. With the help of his slave Qawohl, Teneb cut Exal down and the Republic attack was repelled.

Exal Kressh surpasses the rest of the Emperor's Children in power as she was personally selected and trained by Tenebrae himself to be the first of them all:

Exal Kressh, Blood of the Empire wrote:"When the Emperor called on me, it was my privilege by right of blood and power. I was supposed to be his apprentice. Instead he poured his thoughts into my mind and made me the first of a thousand slaves! To be the Emperor's hier is one thing. To be his pawn is another, and I won't suffer that insult- not after everything I gave him!" 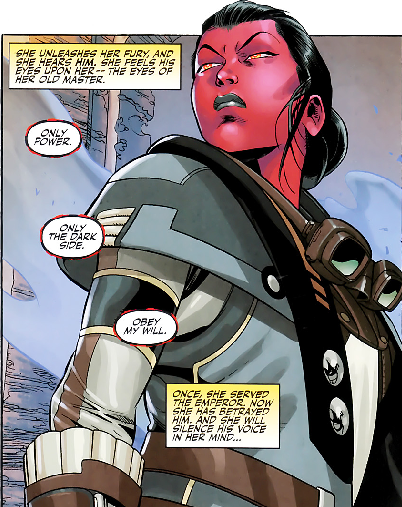 Knights of the Fallen Empire wrote:Valkorion: "But my children... my children abuse their power."

Barsen'thor: "They aren't like your "children" I fought before. They have free will."

Exal Kressh is thus more powerful than the First Son Syo Bakarn. Because I've already spent hours on my post. I'm going to finish off the rest of the post by borrowing what DarthAnt66 has already provided:


Lord Vivicar, possessed by Terrak Morrhage, unleashes a Sith plague on the Jedi Order. Per plague victim Yuon Par, “The plague created a link between my mind and his.” According to overwhelming first-hand testimony, Vivicar then outright telepathically enslaves the linked Jedi through his own will: “I could feel someone else in my mind. Polluting my thoughts, twisting them,” “Lord Vivicar twisted my mind,” “I saw what Lord Vivicar was able to do to Master Yuon. I'm not surprised he was able to twist your thoughts as well,” etc. Further, Nomi Sunrider notes, “It’s most like mind control,” and Wole Vahn says, “It's most like the Jedi trick of persuading weak minds through the Force, except Yuon's tormenter is distant, and her mind hardly weak.” For a visual example, here’s Vivicar overpowering Par’s will after the Barsen’thor drops his shielding technique: https://www.youtube.com/watch?v=fgHCL4o5Y5I&t=2m40s . These Jedi were so intricately linked to Vivicar that, if he was killed, they would all die as well. Vivicar “drew on their strength to fuel his own power,” with the afflicted Jedi “losing strength, fading fast.”

Vivicar reveals that he’s bound hundreds of Jedi to him, "The plague binds these Masters to me. Hundreds of them - the heart and soul of your order,” a number reaffirmed by Syo Bakarn if you strike Vivicar down, "We have reports from across the galaxy. Dozens of Masters have died from the plague, maybe hundreds." Dare I suggest a Sith Lord capable of dominating the minds of hundreds of Jedi and siphoning their powers might be comparable to Maul, Dooku, or Vader?

The Barsen’thor was immeasurably weakened when he confronted Lord Vivicar. The Barsen’thor learned a technique that shields Jedi from Viviar’s influence, but it requires him to permanently expend a significant portion of his power each time its applied until Vivicar is destroyed: "Each time you use the technique, it will cost you some of your own strength. / The shielding ritual will draw on your strength, and you can only regain what you've spent when the plaguemaster's bond with his victims is broken.” This decrease in power is observed by every Jedi he saves: “But why do you look so weak?” (link) , "You've saved me. At great cost to yourself, I can feel it. I am truly sorry” (link) , "Wait, you, you-you look pale. Are you alright?" (link) , “You look so weak. It’s taken a lot of of you” (link) , "My mind is clear again. And you're weak" (link) . In total the Barsen’thor uses the technique seven times over: Yuon Par, Cin Tykan, Duras Fain, Laranna Fain, Eriz Vossan, Sidonie Garen, then again Yuon Par.

Nevertheless, the Barsen’thor still defeats Vivicar in direct battle, then uses his shielding technique to overwhelm and free Viviar from Terrak Morrhage’s influence, overpowering his link to all the Jedi simultaneously. Upon this, all the Jedi “sensed a massive shift in the Force,” and Master Bakarn notes, “Jedi across the galaxy are reporting an improvement in their condition.”

C. CHILDREN OF THE EMPEROR

Aelan Kalder, Child of the Emperor, displays comparable powers to Barsen’thor as of Act Three. Kalder largely resists Barsen’thor’s telekinetic attack, then sends him and his companion flying dozens of meters back with Force lightning (link) . While Kalder’s ultimately defeated, his performance indicates he’s superior to Act One Barsen’thor, yet alone Lord Vivicar.

Blaesus, another Child of the Emperor in a similar position to Kalder, notes, “I can't even comprehend the power [the First Son] wields." The First Son conceals the presence of hundreds of Children across the galaxy simultaneously. Upon learning this, the Barsen’thor responds in disbelief, “One man couldn't hide hundreds of infiltrations from an entire galaxy of Jedi.”

Note that, along with concealing hundreds across the galaxy, the First Son literally sat on the Jedi Council for decades, yet no one suspected anything. For reference, when Darth Zannah in Rule of Two infiltrated the Jedi Temple, she “doubted she could maintain the illusion that shielded her dark side powers from detection any longer than that,” i.e. “a few days at most.”

Kun > Krayt, it's not really even debatable.

There was no reason to bump. I'll have my rebuttal out tomorrow

It wasn't a reply to you, no offense.